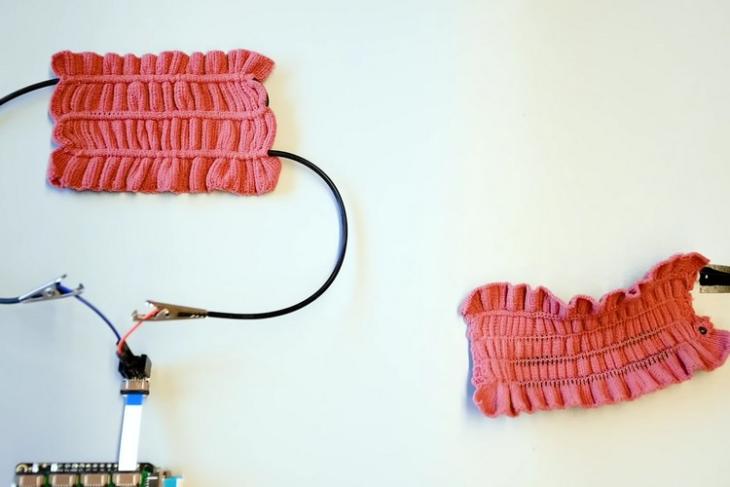 As technology goes through various advancements, more smart products are making their way into society. We have seen companies develop smart backpacks, smart jackets, and even smart benches. Earlier, Google tried to integrate smart features into textiles with its Project Jacquard initiative. Now, a team of researchers has developed a new kind of soft fabric that can sense and physically react to a wearer’s movement.

Dubbed as OmniFiber, the soft robotic fabric has been developed by researchers from the Massachusetts Institute of Technology (MIT), KTH Royal Institute of Technology, and Uppsala University. The fabric can sense its own physical deformation and mechanically curl, stretch, pulse, and bend on-demand and provide immediate feedback.

The OmniFiber is similar to any other soft fabric and can be woven into everyday clothing to turn them into a kinetic garment. This will allow the pieces of clothing to sense a wearer’s movement and react to them accordingly.

As per the researchers, the OmniFiber technology can be used for various purposes, especially in the medical field. For starters, it can help patients monitor and regulate their breathing during post-recovery periods. Furthermore, it can help individuals involved in sports and singing to control their breathing patterns.

You can check out the official demonstration and informational video of the OmniFiber technology attached below to know more about it.

Now, coming to the availability of the new robotic fiber technology in everyday clothing, it might be sometime before we see it in the real world. Currently, the researchers have developed a prototype upper-body garment based on the OmniFiber technology that expands and contracts at different points to help wearers control their breathing, spinal posture, and other body movements while singing.

However, one of the researchers named Ozgun Kilic Afsar says that the team will continue to work on the system to further improve it. Plus, Afsar is also aiming to come up with a manufacturing system to create longer filaments of the OmniFiber.