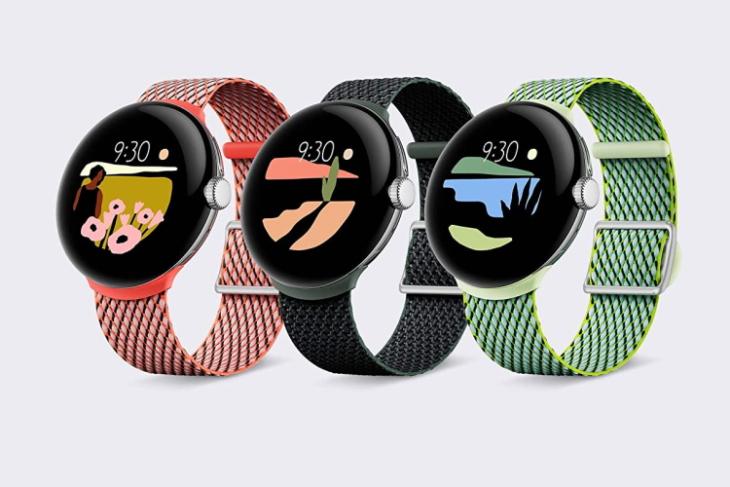 The day Pixel fans have been eagerly waiting to see for years is finally here! Google has officially launched its first-ever smartwatch, aptly named the Pixel Watch, today. First shown off alongside the Pixel 7 series at Google I/O 2022 earlier this year, the Pixel Watch features a premium design, health features on par with Apple Watch 8, Wear OS 3 with new features, and more.

Designed and built by Google, the first iteration of the Pixel Watch looks premium and is feature-rich. It features a circular dome-shaped display, which is a 1.2-inch AMOLED panel, with always-on display (AOD) functionality and 3D Corning Gorilla Glass. Finally, Google is claiming that the dome design “makes the bezel visually disappear” but let’s talk more about it.

As we have seen in the numerous leaks ahead of today’s launch, the Pixel Watch has huge bezels (5.5mm, as per a recent leak) around the circular display. It has been the talk on the internet ever since, so we have got to mention it. Now, the dark UI of Wear OS might hide the bezels and make the display/UI feel cohesive, but it will likely be an eyesore in outdoor use. The bezels on the Pixel Watch even put older Moto 360 watches to shame.

The Pixel Watch supports three stainless steel finishes: black, silver, and gold. As for the straps, the watch supports a twist-and-lock mechanism that securely holds the bands in place. You can choose from among four different band styles – the standard active band, the Stretch and Woven band for comfort, and Metal and Leather bands for that classic, premium look.

Under the hood, the Pixel Watch is powered by the Exynos 9110 chipset (a four-year-old chipset, as rumored). This primary chip has been paired with a Cortex M33 co-processor, 2GB of RAM, and 32GB of storage. There’s also the standard set of connectivity options, i.e Bluetooth 5.0, Wi-Fi (or 4G LTE), NFC, and GPS. Let’s talk about the software next.

Google started reworking the Wear OS experience with Wear OS 3 (first seen on the Galaxy Watch 4) earlier last year. It has since added several new features to its smartwatch operating system, moving up to Wear OS 3.5 last month. Today, Google has introduced other new features to set the Pixel Watch apart from its partner’s offerings.

Pixel Watch runs Wear OS 3.5 with a host of Google apps, including Google Maps, Google Assistant, Google Photos, and more out of the box. You get a new Google Home app that lets you control your smart home from your wrist. You also get access to the Play Store to get your favorite apps like Spotify, Line, Adidas Running, and more.

Moving on to the health features, Google is using the expertise of its in-house Fitbit team to offer you top-notch and proven hardware on the Pixel Watch. It bundles this hardware with a new Fitbit app that takes care of all your health tracking needs. You can use this app for step tracking, continuous heart rate and sleep monitoring, and checking up on your recent workout sessions.

Much like the Apple Watch and Galaxy Watch, Google also offers ECG support with the Pixel Watch. It enables you to check your heart for signs of atrial fibrillation and an irregular heart rhythm. The watch will also support Fall Detection with a rollout scheduled for next year.

As for the battery life, Google claims that the Pixel Watch will easily last you a full day (up to 24 hours) on a single charge. There’s a 294 mAh battery onboard here. The charging needs here are handled by a USB-C magnetic charging puck, much like the Apple Watch.

The Pixel Watch will be available in two variants: one Wi-Fi-only variant and the other with Wi-Fi + 4G LTE connectivity. Check out the prices for both variants right here:

While the Pixel 7 and 7 Pro have launched in India today, there is currently no official word on whether Google’s smartwatch will find its way to Indian shores or not. So stay tuned for more information. Until then, let us know if you will think Pixel Watch could compete with the Galaxy Watch and other Wear OS watches in the market.