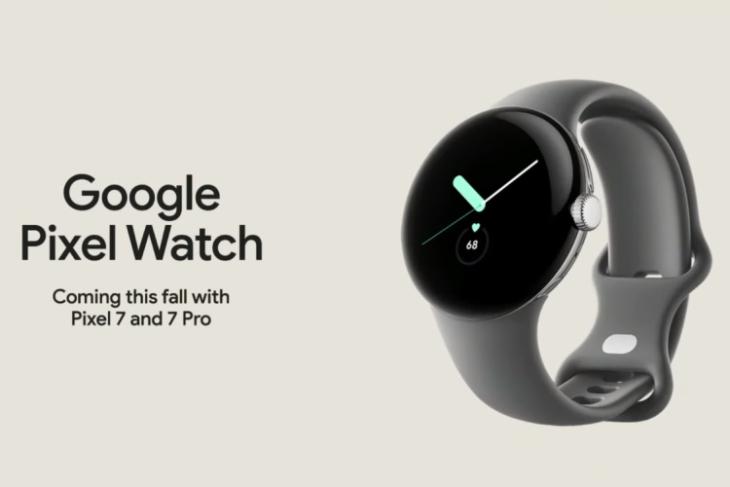 The Pixel 6a is not the only hardware device that Google brought to showcase at the Shoreline Amphitheatre during the I/O 2022 developer conference. The Mountain View also officially revealed the long-rumored Pixel Watch, Google’s first smartwatch to date. Excited? Let’s look at the details we know right now.

In an attempt to build a homegrown ecosystem of products, Rick Osterloh, SVP, Devices & Services at Google announced the Pixel Watch on stage at I/O 2022. He was seen rocking the smartwatch himself. This is the first smartwatch made by Google and comes with a circular dome-like design, a proprietary strap system, and an array of sensors arranged horizontally at the bottom.

Availability details have been mentioned in this article towards the end, so keep on reading. Here’s an official tweet showcasing the design of the Pixel Watch:

While Google didn’t share a ton of details for the Pixel Watch at the event, we have seen numerous leaks and rumors in the past. The official teaser corroborates the recent real-life image leaks, confirming the rounded design and minimalist look. You have the digital crown on the right and two interaction buttons on the side bezel below it.

Furthermore, Google confirmed that the Pixel Watch will, of course, run Wear OS out of the box. It will support a number of improved and useful features such as Google Assistant voice typing, Google Home controls, Google Wallet, better navigation, and more.

Also, in line with previous leaks, the company announced that its first smartwatch will come with Fitbit integration (Google owns Fitbit). It will enable continuous heart rate tracking, sleep monitoring, and other health-centric features on the watch.

We will have to wait until Q4 2022 to learn all about the Pixel Watch, including its specs, price, and availability details. So yeah, stay tuned and return back for more Google I/O 2022 coverage.