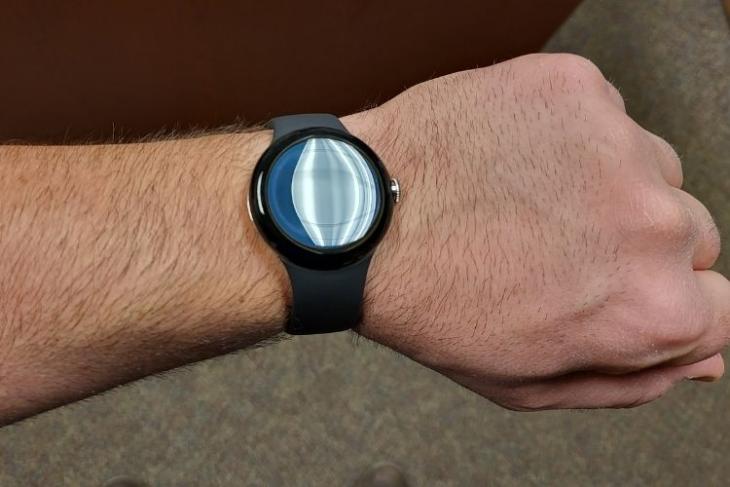 A few days ago, we saw the much-rumored Pixel Watch’s real-life image surface, giving us a look at what Google’s first smartwatch will be like. We now have more real-life images of the same with a person actually wearing the Pixel Watch. As per a Reddit user’s claims, it is the most comfortable watch yet. Here’s a look at the details.

A Reddit user with the name “u/tagtech414,” who is the same person that leaked the Pixel Watch’s dial image, showcased it with a 20mm silicon band, which is most likely made by Google. This is hued in black and features a proprietary connector, which was apparently difficult to connect for the first time.

However once done, it became “extremely secure” and felt so light on the wrist. As per the images, the Pixel Watch seems to measure 40mm with a thickness of 14mm and weighs 36 grams. It is also said that the digital crown didn’t poke the user’s wrist while it was bent or while typing. This could be because of the watch’s rounded and raised chassis.

The display is seen as being fully bezel-less, something we have heard several times in the past. Other images show the Pixel Watch from various angles, which also give a glimpse of the sensors underneath the dial.

While this leak talks mainly about the Pixel Watch design, a past few have hinted at details like an Exynos chipset instead of a Qualcomm one, a specially-made Google Assistant with new features, Fitbit integration, and the usual smartwatch features, among others.

However, it is worth noting that while this evidence point to it being the actual Pixel Watch, we are yet to get a confirmation from Google. Since the Pixel Watch rumors are seen surfacing every other day, we are most likely to see more details on it at the upcoming Google I/O 2022 event. Google could either launch it or reveal some official details on it.

Hence, it’s best to wait until next month to get a better idea of Google’s first smartwatch. Stay tuned and do tell us how you like the Pixel Watch design in the comments below.