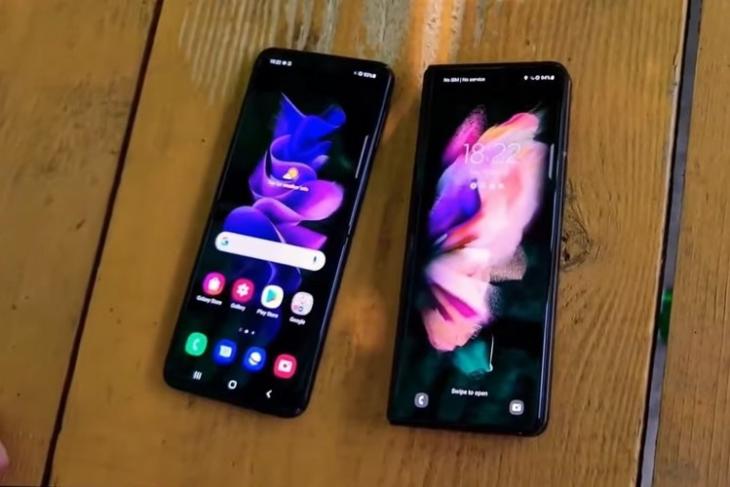 As Samsung prepares to launch its next-gen foldable devices later today, the company is having a hard time keeping the leaks off the table. We have already seen renders and leaks of the Samsung Galaxy Z Fold 3 and Galaxy Z Flip 3. And now, just hours before the official launch, a hands-on video that showcases both the foldable devices has surfaced online.

The recent hands-on video of the Galaxy Z Fold 3 and Galaxy Z Flip comes from reliable tipster Ben Geskin. He recently shared the video on his YouTube channel, where we can see both the upcoming Samsung foldables in the real world. You can check out the video attached right below.

Now, other than the hands-on video, the spec sheets for both the upcoming Samsung devices have leaked too. The leak comes from tipster Sudhanshu Ambhore, who took to Twitter to share the specs of the upcoming devices.

So, let’s take a look at the key specs of the Galaxy Z Fold 3 and Galaxy Z Flip 3 ahead of their official launch.

Starting with the smartphone-cum-tablet Galaxy Z Fold 3, we already know that the said device will be the first Samsung device to feature an under-display camera (UDC). The device will come with a 6.2-inch AMOLED panel for the cover (outer) display and a 7.6-inch AMOLED panel for the foldable display. Both the displays, as per the leaked specs, will support a 120Hz refresh rate and boast resolutions of 2262 x 832p and 2208 x 1768p, respectively.

As for the optics, there will be a triple camera setup at the back with a primary 12MP sensor, a 12MP ultra-wide lens, and another 12MP telephoto lens. At the front, there will be a 4MP selfie snapper embedded under the inner display of the device.

Under the hood, the device will pack the Qualcomm Snapdragon 888 chipset paired with 12GB of RAM and 256GB of UFS 3.1 storage. There will also be a 4,400mAh battery with support for 25W fast charging inside. Moreover, the device will come with an IP68 rating for water and dust resistance, which is pretty neat for a foldable device.

Coming to the clamshell-style Galaxy Z Flip 3, the device will come with a 1.9-inch AMOLED cover display, which is significantly bigger than the 1.1-inch outer display on current Z Flip models. Opening the device will reveal a 6.7-inch AMOLED panel with a resolution of 2640 x 1080p and a refresh rate of 120Hz.

At the front, there will be a 10MP selfie shooter, and at the back, the device will come with a 12MP + 12MP dual-camera setup. As for the internals, the device will be powered by the same Snapdragon 888 SoC and it will be paired with 8GB of RAM and 256GB of UFS 3.1 storage.

Other than these, there will be a 3,300mAh battery with support for 15W fast charging inside. The device will also come with stereo speakers and an IP68 rating for water and dust resistance.

Samsung will unveil the Galaxy Z Fold 3 and the Galaxy Z Flip 3 at its Galaxy Unpacked event later today. So, be sure to tune in as we will be covering the event. It will start at 7:30 PM in India and be live-streamed on Samsung’s official YouTube channel.

Samsung Galaxy Z Flip 3 FAQ: Everything You Need to Know!