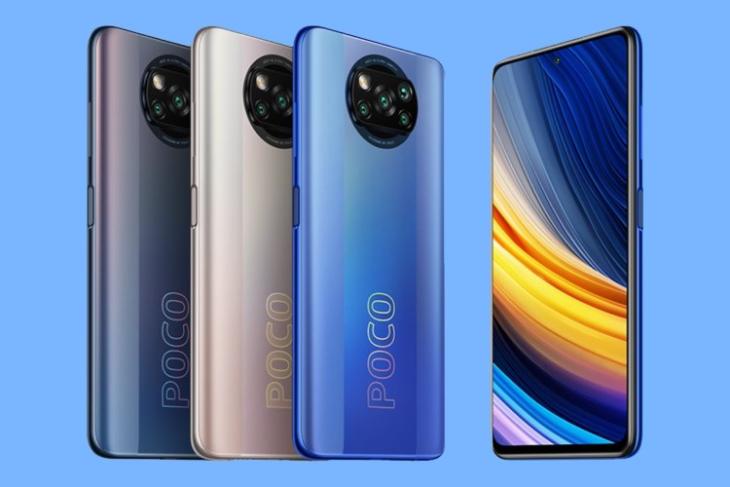 After leaking the India prices of the latest Samsung Galaxy A52 and A72, tipster Ishan Agarwal has now given us a first look at Poco’s upcoming flagship. After launching the Poco X3 in India late last year, the company is now looking to add a Pro version to the lineup. It is being called the spiritual successor of the Poco F1. The company recently confirmed that Poco X3 Pro will launch in India on March 30.

Now, we have the first look at the design of Poco’s upcoming flagship device. Agarwal got his hands on the Poco X3 Pro official renders and shared them on Twitter recently. You can check them out below.

As you can see in the images above, Poco X3 Pro carries a similar design as the Poco X3. It has a similar display with a punch-hole design and a humongous round camera module at the back. Based on initial rumors, Poco X3 Pro will feature a 48MP primary sensor. If true, it will be a step down from the 64MP camera aboard the Poco X3.

The device will come in three color options – Metal Bronze, Phantom Black, and Frost Blue. And it has the same massive, holographic Poco-branding at the back. Also, there’s a side-mounted fingerprint sensor that will double as the power button.

So, all in all, the device looks pretty similar to the non-Pro variant. However, instead of the Snapdragon 732G SoC aboard the X3, the Pro variant is expected to run on the Qualcomm sm8150 platform. This lineup, for the uninitiated, includes chipsets from the Snapdragon 855 family. The rumor mill expects an unannounced Snapdragon 860 chipset to power the device.

The company is set to launch the device globally on March 22. So yeah, are you excited to finally meet the true Poco F1 successor? Let us know your thoughts in the comments below.