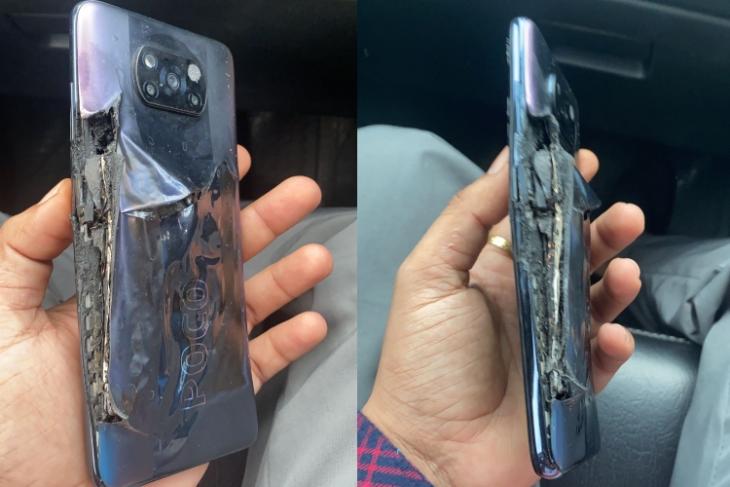 Although smartphones have become one of the essential commodities in our lives, it is not a pretty sight when they explode or catch fire near us or our loved ones. While smartphones catching on fire or exploding was not common before, we have seen various devices explode in users’ pockets or while charging in the recent past. Similarly, a user recently reported that his Poco X3 Pro exploded only two months after purchase. The device was officially launched in India back in March this year.

The report comes from a user named Ammy Bhardwaj who recently took to Twitter to share his tragic accident. Bhardwaj shared a couple of pictures of his exploded device and says that his Poco X3 Pro caught fire and exploded right after he disconnected it from charging. You can check out his tweet right below.

So, as you can see, the user mentions that his Poco smartphone was fully charged before he disconnected from the charging adapter. Just five minutes after he disconnected it from charging, the Poco X3 Pro caught fire and exploded on the user’s bed. Luckily, no one was injured during the accident. Only the user’s bed sheet was ruined.

Now, looking at the pictures of the destroyed device, it seems like the battery of the Poco device swelled up inside and caught fire. Although there is no image of the device’s front, the back panel of the smartphone is completely destroyed.

Bhardwaj states that he reached out to Poco’s official customer care handle on Twitter following the accident. Although the company has responded back to his tweet, the user reports that no further actions have been taken regarding his device.

Poco clarified that its smartphones go through various quality checks before release. However, due to the volatile nature of Lithium-ion (Li-ion) batteries, you never know which one will explode and turn your smartphone into a burning bar of fire. You can check out our recent in-depth video on YouTube to get an idea of why modern smartphones are prone to exploding right below.

Now, if you are worried that your smartphone will explode too, you should take some precautionary measures. For starters, avoid leaving your smartphone for overnight charging beside where you sleep. Instead, keep an eye on the charging and the thermal level of your device and disconnect it before the back panel gets too hot. And if you think your battery is swelling up over time, replace it right away before it explodes and destroys your smartphone.

Here’s Your First Look at the Poco X3 Pro