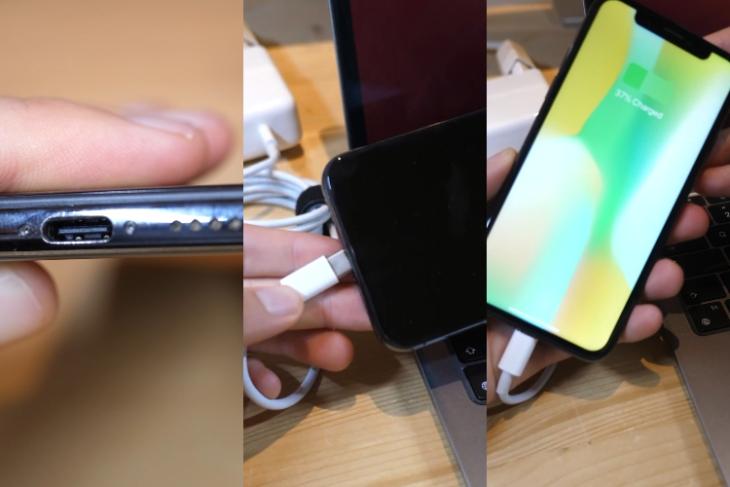 While most smartphones nowadays include a USB-C port for charging, Apple has stuck with its trusty lightning port for the longest time. Although the Cupertino giant has switched to USB-C on its iPad lineup, it still offers a lightning port on the iPhone models. However, an engineering student has used his skills to put a USB-C port on his iPhone X to make the world’s first USB-C iPhone.

Named Ken Pillonel, the YouTuber-cum-engineer started with the project a few months ago, intending to replace the Lightning port on his iPhone X with a female USB-C port for charging and data transfer. Although it was not an easy task, Pillonel did the necessary research and testing to make it work and ended up adding a USB-C port to the iPhone.

Now, coming to his Lightning-to-USB-C (L2C) project, as per his in-depth blog post from May, Pillonel says that he had to do some work to put a USB-C port on his iPhone X. The main idea was to convert the male end of a USB-C to Lightning cable into a female port and “make the whole thing fit inside the iPhone.”

Pillonel broke down the project into steps and started testing whether the theory works. Following his first tests, Pillonel discovered that the Type-C female to Type-C female trick did not work as expected. However, the engineer found a way to make it all work, after studying the Type-C specification documentation and the internals of a few cables.

You can check out the whole research and development process of the project in Pillonel’s YouTube video attached right here.

Following the research, the engineer reverse-engineered the entire C94 board, which is a circuit present on MFi-certified cables available in the market. Pillonel removed the female lightning port and soldered wires straight to the bare C94 circuit board. Following this, he spent months trying to fit the whole board into his iPhone model without losing any of its functionalities.

On October 9, Ken shared a YouTube Shorts video to announce that the project has been successful. You can check out the video showcasing the USB-C iPhone X right below.

As you can see, the USB-C port on Ken’s iPhone works just like any other USB-C port. It works for charging as well as data transfer and is the world’s first iPhone with a Type-C connector.

Although it is likely that Apple might soon be forced adopt the USB-C port for its iPhone models, especially after the recently updated EU proposal, Pillonel could not wait and did it himself as he desperately wanted an iPhone that he could charge with a USB-C cable. And the fact that he could successfully bring his project to fruition is pretty cool.