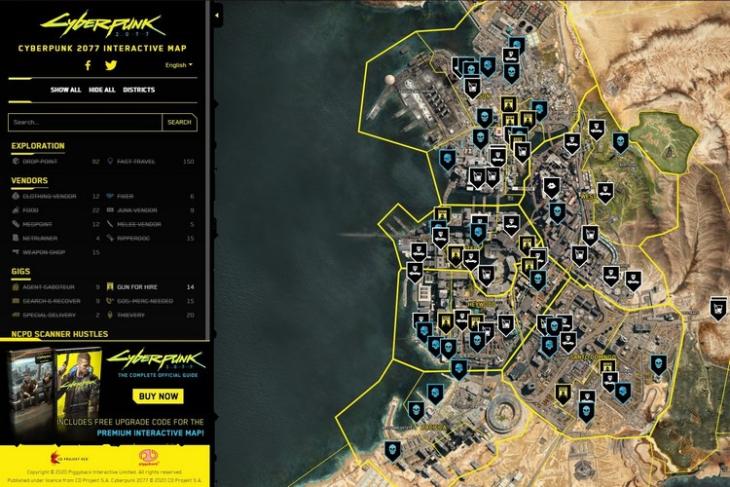 After several delays and a lot of anticipation, CD Projekt Red finally released its most hyped video game title, Cyberpunk 2077 this month. So, if you got the title and are struggling to get around in the massive, in-game city, the Night City, in which the game is based, then I have got some good news for you. Game-guide makers, Piggyback created this super-cool, interactive map of the city to help players know Night City like the back of their hands.

The web-based interactive map is available in a basic free version and a premium paid version. To access the premium features, you need to spend $5.99 (~Rs. 440) for an instant upgrade. The creators recently announced it via a tweet and explained the various features it offers. You can check it out right below.

Now, Piggyback’s Cyberpunk map features a satellite view of Night City in which you can find various fast travel locations, vendors, stores, food joints, weapon shops, and more. You can click on these locations to get a HUD (heads-up display) containing additional info about them.

Although the map is available in a 4.2 gigapixel resolution version, you will get a low-res version in the free edition. Also, in the premium edition, you will be able to view official screenshots of each location to get a better picture before getting there virtually.

There is also a side-bar on the left. It contains the categories of the in-game locations, and you can strike out certain ones to eliminate the points under that specific category on the map. Moreover, you can also disable the district lines that differentiate the various segments of the city. This makes the map cleaner and easy-to-view.

Currently, the Cyberpunk Interactive Map is available in various languages including English, Deutsch, Spanish, French, and a few more.

So, if you are having a problem navigating around the in-game city of the future, you can check out the Piggyback map on its official website.