With the advent of the internet and rapidly-developing mobile technology, everyone from young to old wants to have a smartphone in their hands. Not only it enables real-time communication, but it also allows one to check weather, order food, track their health, and more. However, with new smartphone technology comes added complexity and that is where the senior citizens fall behind. So in this article, we bring you the best smartphones for senior citizens which can be effortlessly used by parents and elderly people. We have carefully selected the list of smartphones so seniors can easily navigate the device. Now with all that said, let’s go ahead and find out the best smartphones for seniors in 2020.

Top Smartphones for Seniors in 2020

Here, we have mentioned a total of 8 smartphones designed especially for senior citizens. We have given preference to those devices which come with a physical home button. Also, the list includes both Android and iOS devices at different price points so you can choose whichever one that suits your needs. Now on that note, let’s go ahead and unpack the list.

If you are looking for the best smartphone for senior citizens, may I recommend the most obvious choice? Yes, the iPhone is a great elder-friendly device with a simple interface and a physical home button. No matter where you are lost on the phone, just press the home button and you are back to your homepage. Other than that, iPhones are one of the most secure devices and come with protection from ad-hijacking and virus attacks. So, elderly people won’t be misled by scammy ads or malicious links. 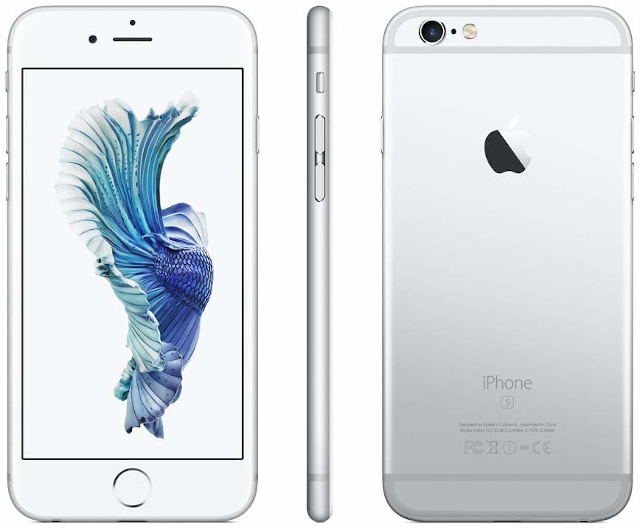 Further, iPhones are known for having some of the best accessibility features. From the Accessibility Settings, you can increase the fonts, make the UI a bit bolder, reduce the transparency and much more. You can also make the overall UI and keyboard size bigger from Display settings. It will help seniors to navigate through the UI comfortably. Now the question remains, which iPhone should you buy for senior citizens? Well, I would recommend you to either go with iPhone 6S or SE. Both are capable devices, housed with the A9 chip and still come with a headphone jack. They are also budget-friendly.

If you the headphone jack is no concern, go for the newer iPhone 8 or wait for the new iPhone SE 2 (iPhone 9) which will bring the same form factor with upgraded internals. Overall, I find iPhones to be the best phones for senior citizens.

If you don’t want an iPhone, you can get the Jitterbug Smart2 which is a dedicated smartphone for senior citizens. The smartphone is designed especially for elderly people and it comes with a large screen and simplified interface. Right from the home screen, you get a clutter-free listicle menu with big icons and readable texts. And the menus are not only simplified for the home screen, but it follows the same design layout in apps as well. No matter if you are texting, taking photos or getting directions, you will always be guided by a clutter-free user interface.

Apart from that, the Jitterbug Smart2 has all the smartphone features as it basically runs Android underneath the simple UI. So you can have WhatsApp, YouTube, Skype and many more Android apps in a larger and readable interface. To conclude, if you want the best smartphone for senior citizens, Jitterbug Smart2 is one of the solid picks on this list.

Doro is a unique smartphone company based in the UK that creates some of the best user-friendly smartphones. Similar to Jitterbug Smart2, Doro 8035 runs on Android, but it has a physical home button which is really helpful for seniors. On Doro 8035, you have two options: you can either choose the standard Android UI or Doro’s intuitive UI. With Doro’s UI, the overall interface becomes larger with readable texts and icons. Other than that, the smartphone comes with the powerful Google Assistant so you will be able to complete a lot of tasks just by your voice command. Not to mention, you have camera functionality, LTE support, internet services, built-in app store and all the smartphone features that you expect on a standard smartphone. So all in all, Doro 8035 seems like a really good option and you should consider it as well. 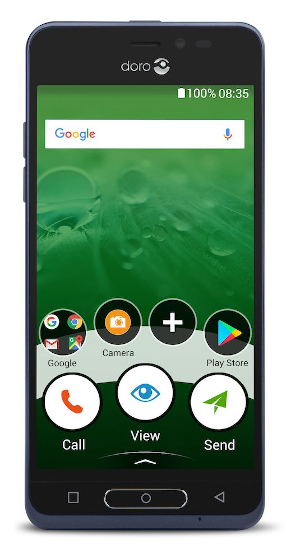 Nokia 2 is another great smartphone for senior citizens who just want to make calls, check messages and click photos from time to time. It’s powered by the Android Go operating system which is a stripped-down version of the standard Stock Android. So, the smartphone runs quite well and has significantly less clutter than what you generally find on many Android devices. And the great part is that you can increase the overall UI size, customize the home screen, and create shortcuts of your regular contacts in just a single tap. 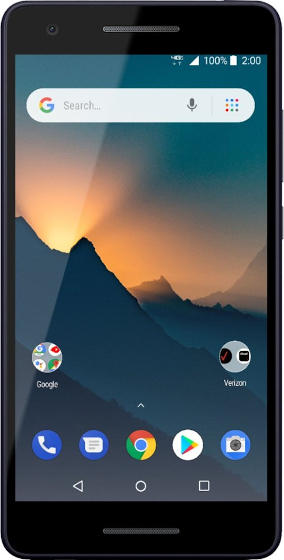 Sure, it does not come with all these settings out of the box, but since it’s Android, you have a lot of options to leverage. Having said that, the phone does not miss out on any smartphone features. You can still install the standard Android apps, but it might slow down the device. Nevertheless, Nokia 2 is a well-built smartphone and can be a great choice for elderly people.

The Samsung Galaxy J7 is my personal favorite in this list and I am going to tell you why. Instead of going for dedicated smartphones for elderly people, a standard Android smartphone is a much better proposition. It’s because, all the Samsung smartphones, and in this case, the Galaxy J7 comes with an Easy Mode built into the system. After enabling Easy Mode, the device will turn into a simplified version of a smartphone with a clutter-free home screen and bigger on-screen items. 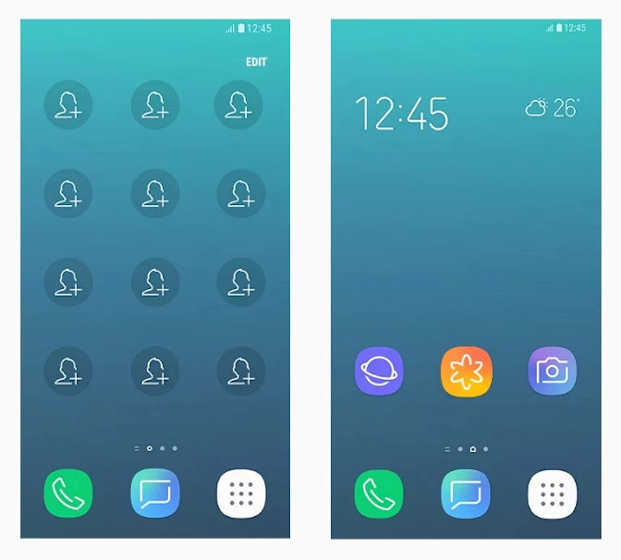 In this mode, the screen zoom is set to maximum so not only the home screen but also the apps will look much bigger and readable. Not to mention, the Galaxy J7 comes with a physical home button which is really helpful for elderly people. Apart from that, the device is pretty powerful for day to day usage with 4G support, good cameras, and more. Simply put, the Easy Mode on Samsung Galaxy J7 is really good and you should definitely use this feature for senior citizens.

If you want something more premium with better cameras and bigger screen, go with Samsung Galaxy S9. For $500, you will be getting a premium flagship smartphone that still has a headphone jack.

The Moto E5 can be another great smartphone for senior citizens. It comes with Stock Android which means you will get a clean experience with consistent and minimal design across the UI. Sure, it does not have a dedicated Easy Mode like Samsung devices, but you can get a similar experience by adjusting a few Accessibility Settings. Currently, Android has gained a lot of great accessibility options which can help you navigate your device effortlessly. Features like Display Size, Font Size, and High-Contrast Text can make the content readable on the screen.

Apart from that, you can install an elder-friendly launcher to simplify the home screen with various one-tap actions. I have talked about such launchers in the last section of this article so go through that. To put things into perspective, the Moto E5 is a really good device with uncomplicated software and you should consider it given its inexpensive price.

Honor 8A is our next Android device in this list which can act as a great smartphone for senior citizens. Similar to Samsung phones, Honor 8A comes with a Simple Mode where the whole UI is completely restructured to make it readable and fine-tuned for elderly users. And with the latest EMUI 10 update, the Simple Mode is even better with its card-like menu on the home screen. Other than apps, contacts, and messages on the home screen, you can also add various functions like torchlight, a 911 call shortcut, and more. 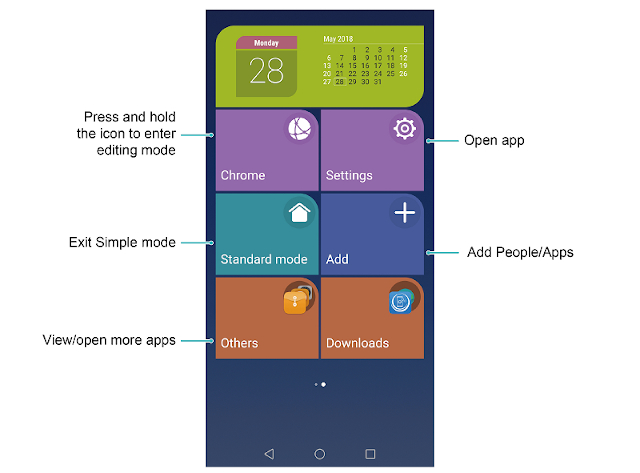 Further, it allows you to customize the Simple Mode to a greater degree as Honor 8A ships with Android Pie. It has all the new accessibility features for you to take advantage of. As it runs a full-fledged Android OS underneath, you get all the smartphone features and without any omission. Do not worry, this Honor device already has Google certification and you can use all the Google apps without any issue.

If you can loosen the purse strings a bit, you can very well opt for the Google Pixel 3A. It’s a budget device by Google and can be a solid pick for senior citizens. Of course, the camera is its selling point, but the reason I am recommending this device for elderly people is because of its clean Android experience. From apps to the home screen, everything is bloat-free and you can customize the device to a great degree. Not to mention, since the Pixel 3A is built by Google, you will get day-one updates, making your device secure and protected from malicious attacks and adware.

To put it straight, you will not have to worry about security with this device. Also, the device runs the latest Android 10 so you get new assistive features and powerful Google Assistant. However, if you want to make the home screen even more simple, you can install a third-party launcher which I have discussed below extensively. To conclude, if you want an Android smartphone for senior citizens which is very close to the iPhone in terms of simplicity and security then the Google Pixel 3A is a worthy pick.

There are some devices from Samsung and Honor which offer a built-in mode to make the operating system simpler and easy to use. However, some Android devices– mostly having Stock Android– don’t come with a native easy or simple mode. In such cases, you can install a third-party launcher which can simplify the overall user interface for senior citizens. The best part about these launchers is that you can choose apps to show on your home screen with big icons and readable labels. Other than that, you can also set up emergency contacts in a one-tap shortcut and also bring volume, flashlight, and brightness controls right on your home screen. 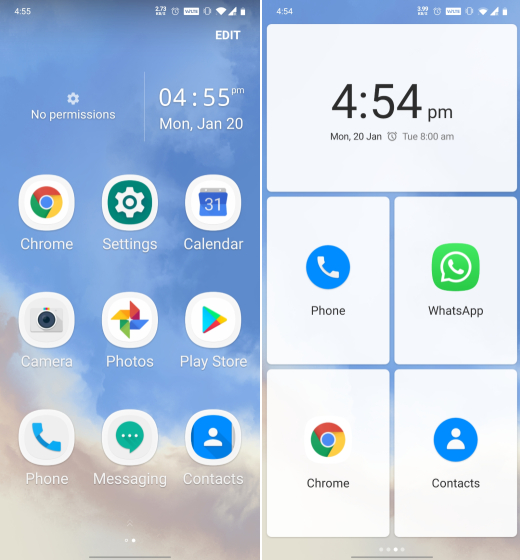 Of many such Android launchers, I found Simple Launcher and Simple Mode to be the best which has all the necessary features. So go ahead and try both the launchers on your device and see if your parents can navigate through an Android device. I suppose this is the best way you can offer an Android device in a simplified manner.

The Best Smartphones for Parents and Seniors in 2020

So those are our picks for the best smartphones for parents and seniors at the beginning of this year. We have carefully chosen smartphones and not basic cell phones so that seniors can also enjoy this new wave of technology. In case, you are confused about which one to pick, I would recommend a decently-powered Android device from the list and slap a simple launcher on top of it. Anyway, that is all from us. If you found the article helpful, do let us know in the comment section below.