Windows RT for ARM may have been a resounding failure but, Microsoft never stopped trying to put its ubiquitous PC operating system on RISC (reduced instruction set computers) devices. With the launch of Windows 10 on ARM, the Redmond-based software giant will now hope to finally get a foothold in a market thus far dominated by Google and Apple with Android and iOS respectively. So in case you’re thinking about picking up a Snapdragon 835-powered Windows 10 laptop, here’s what you need to keep in mind:

The very thought of Windows 10 on ARM devices takes many of us back to the Windows RT days which was a complete and utter failure any which way you look at it. However, the two are as different from one another as oil is from water. Windows RT didn’t allow end-users to run traditional desktop software, nor did it allow developers to compile their desktop programs for ARM processors. The result? Developers and consumers both stayed a long way away from the platform, resulting in its quick and untimely death.

Thankfully, Windows 10 on ARM is expected to be completely different. As a user, you’ll get the full desktop experience this time around, thanks to the implementation of a special emulator layer that allows traditional 32-bit desktop applications to run on ARM processors. In fact, the emulation system uses the exact same WOW (Windows on Windows) technology that Windows uses to run 32-bit applications on 64-bit versions of Windows, although, the x86-to-ARM emulation is entirely software-based.

While emulation remains at the heart of Windows 10 for ARM, it only kicks into action while running traditional Windows x86 programs. The actual underlying software, including the Windows kernel, hardware drivers, and all included programs, are all native ARM code, as are all the Universal Windows Platform (UWP) apps listed on the Windows Store.

Will the Windows 10 Experience on ARM be Any Different From Windows 10 on x86-64?

Even as Microsoft is painting a rosy picture of the Windows experience on ARM, there are a couple of things you need to keep in mind. First off, Snapdragon-based Windows devices may not support all hardware peripherals right off the bat because their drivers, which were written for the Intel X86 platform, will be incompatible with ARM hardware, which is why vendors will need to provide all-new drivers for those devices to work normally.

Secondly, Windows 10 on ARM devices will ship with Windows 10 S, which has a limited set of features and, can only run software from the official Windows Store. In case you try to install a non-Windows-Store program on a Windows 10 S PC, you’ll see a message that says, “For security and performance, Windows 10 S only runs verified apps from the Store”. You can, however, install traditional Windows programs on Windows S devices pretty easily, but we’ll discuss that in the next segment.

You also need to know that while Windows 10 S will offer some of the features of Windows 10 Pro (think BitLocker encryption and Hyper-V virtualization), it won’t have access to command line environments or tools. Which means, there will be no Command Prompt (CMD) or PowerShell environment. It also doesn’t include WSL (Windows Subsystem for Linux), which means you won’t be able to install the Bash shell for Linux environments like Ubuntu, openSUSE or Fedora.

Can You Install Traditional Desktop Apps on ARM-based Windows 10 Devices?

The short answer? Yes, but with a couple of caveats. You can install traditional desktop apps on ARM-based Windows 10 devices, but only as long as the apps are 32-bit and don’t require kernel mode drivers. Also, Windows 10 S devices, irrespective of whether they’re powered by Intel, AMD or ARM, will only let you install apps from the Windows Store.

However, you shouldn’t let that dissuade you from opting for a Windows S computer because any device running Windows 10 S can be upgraded to Windows 10 Pro, which will not only allow you to install traditional desktop programs just like any regular PC, but also bring all the advanced Windows features that you’d expect from a standard-issue Windows laptop powered by an Intel or AMD chip. For now, Microsoft isn’t charging anything for the upgrade, but do note that, the ‘Free Upgrade’ offer is only in place until September 2018.

Microsoft has tied up with several traditional Windows OEMs to bring Snapdragon-powered PCs to the market. Asus NovaGo will reportedly be the first such device to hit the retail shelves, followed by the HP Envy x2 and a yet-unnamed device from Lenovo. While other manufacturers are also expected to jump on the bandwagon if the experiment proves to be a success, don’t expect to see a flood of new ARM-based laptops anytime soon.

The Asus NovaGo TP370 features a 13.3” Full HD (1920 x 1080) LTPS “NanoEdge” display that offers 10-point multi-touch as well as stylus support in the form of the Asus Pen with 1024 levels of pressure sensitivity. As mentioned earlier, it is powered by the Snapdragon 835 SoC that comes with an integrated ARM-based 64-bit CPU and an Adreno 540 GPU. While the application processor has eight Kryo 280 cores clocked at up to 2.45 GHz, the graphics processor is clocked at 710 MHz.

There’s also up to 8GB of RAM and up to 256 GB of UFS 2.0 flash storage that’s rated at up to 175 MB/s or 4000 Mbps. More affordable models will also be offered with 4GB / 6GB of RAM and 64GB / 128GB of storage. The NovaGo will have four antennas and support Gigabit LTE (1 Gbps downlink, 150 Mbps uplink) and dual-band 802.11ac MU-MIMO Wi-Fi. It will also come with a Nano SIM slot or eSIM (embedded SIM) functionality for the much-talked-about ‘Always-on’ feature. 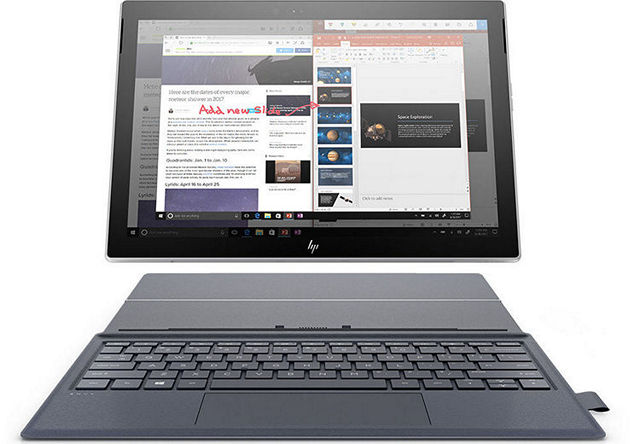 We’ll update you about the performance benchmarks once we get our hands on the machines, for now, the only thing we’ve heard is that users can apparently expect to get 20+ hours of battery life from these devices. However, seeing as that claim comes from Qualcomm and its OEM partners, we’ll take it with a pinch of salt unless we see it for ourselves.

While the Asus laptop might be available in the coming weeks, HP and Lenovo are expected to bring their respective offerings to the market early next year. The Asus device will come a price-tag ranging from $599 to $799, the pricing of the other devices are yet to be announced publicly. However, the aforementioned leak seemed to suggest that HP will price its devices below $200, which does seem extremely unlikely, even though the leak originated from HP’s own official website. Qualcomm, on its part, has already said that Snapdragon-powered laptops will be priced between $400 – $700, so expect all these first-generation ‘Windows 10 on ARM’ devices to be priced in the same ballpark.

SEE ALSO: Microsoft Debuts Windows 10 on ARM: Here’s What You Should Know

Windows 10 on ARM: How Can it Help Both Qualcomm and Microsoft?

Qualcomm has grand ambitions of taking on Intel at the enterprise level, but even if Windows on ARM turns out to be a success, ARM servers may still be a step too far right now, given the sheer difference in performance levels between Qualcomm’s chips and those from Intel. However, with mobile steadily becoming the driving force for the semiconductor industry, Microsoft badly needs a toehold in the segment and, desperately needs this to be a success.