At Computex 2021 earlier this month, AMD launched FidelityFX Super Resolution, a new spacial upscaling technology aimed at delivering a high-quality, high-resolution gaming experience. Touted as the competition to NVIDIA’s DLSS 2.0, AMD turned a lot of heads with this upcoming technology. Now, AMD FSR has finally launched, and as per the current benchmarks, it looks quite impressive. However, before we get into the finer details of whether AMD FSR matches up to DLSS, let us tell you everything you need to know about AMD FSR.

We will detail what is AMD FSR, how FidelityFX Super Resolution works, and how to enable it for an improved experience in supported games in this article. So feel free to read the whole thing or use the table below to skip to your desired section.

What is AMD FSR?

AMD FidelityFX Super Resolution is AMD’s version of an image upscaling technology that aims to improve a gamer’s overall experience. Launched as the latest effect in AMD Fidelity FX Suite, the company’s open-source image quality toolkit for game developers, AMD FSR will cleanly upscale the edges of in-game objects to create the illusion of a higher render resolution while you are playing at a lower one.

According to AMD’s official blog, “With FidelityFX Super Resolution, gamers can expect to get on average 2.4x the performance when running at 4K in “FSR Performance” mode in select titles.” Plus, you will be pleased to know that AMD FSR will be available on PC as well as next-gen consoles, including Xbox Series S/X and PS5.

AMD’s FSR is the company’s direct competitor to NVIDIA DLSS, another popular upscaling technology that uses its own set of methods to achieve similar results. However, while the technologies seem similar, some differences set them apart from each other (more on this below).

Will AMD FSR Improve My Gameplay?

Definitely. Since AMD FSR is aimed at providing higher resolution textures and better framerates without putting a heavy load on gamer’s GPU, players will see an increase in performance in FSR-supported games (check out the list below). The company tested FSR technology in popular games like Godfall, The Riftbreaker, and others on the Radeon RX 6900 XT. You can check out the performance comparison when AMD FSR is turned off and on using the chart below: 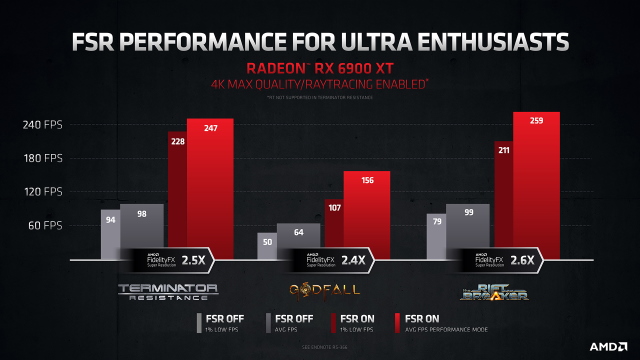 Let’s use an example – Let’s say you are playing a game on a 4K monitor with the output resolution set to 4K and FSR turned on. Depending on the mode you have chosen, the technology will ensure that the game runs at a lower resolution internally (1080p, for example), and FSR reconstructs and upscales the output image that is close to looking like 4K.

This way, you will get 4K-like game output with higher framerates, and your graphics card won’t have to work as hard. Similarly, if you are playing on 1080p resolution, you can get quality upwards of 1440p while not stressing your GPU. 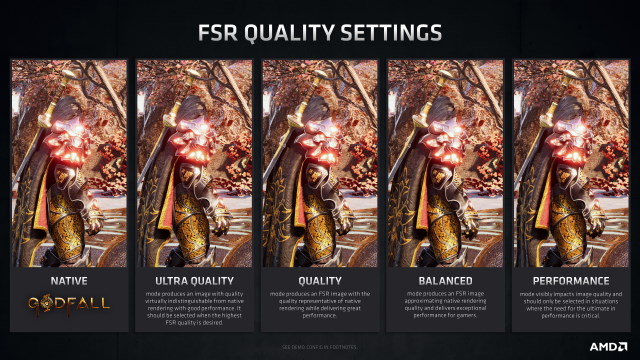 When it comes to customization, AMD FSR lets you choose between four quality modes depending on your needs. These modes are Ultra Quality, Quality, Balanced, and Performance.

The Ultra Quality mode will boost the in-game frame rates while giving you the closest resolution and most detail to the native resolution. However, the output resolution will be a bit lower when compared to what you set. So in the case of 4K resolution, which is 3840 x 2160, FSR will render at 2954 x 1662 at Ultra Quality. 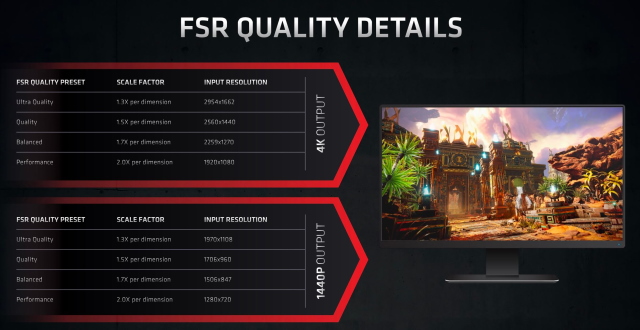 The resolution will keep going down as you choose other modes such as Balanced and Performance. You will still get higher frame rates but lesser image quality as FSR has lesser input data to work with. Nevertheless, FSR will work well with lower resolutions, thereby being a boon for users with older GPUs (especially during the ongoing global chip shortage).

Now that you have the gist of what AMD FidelityFX Super Resolution is, let’s talk about how it works.

How Does AMD FSR Work? 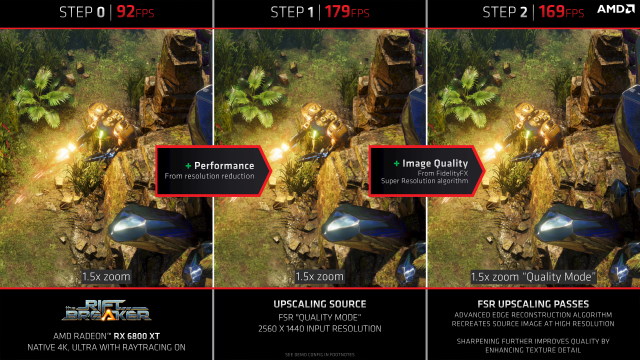 The first pass is called Edge-Adaptive-Spatial Upsampling (EASU). EASU is an edge reconstruction algorithm that tries to recreate and upscale the image input to a higher resolution.

The second pass is called Robust Contrast Adaptive Sharpening (RCAS), and it extracts pixel detail in the upscaled image and sharpens it further, thereby enhancing clarity. Both the processes happen simultaneously during the game’s graphic pipeline, so the results are instantaneous.

How is AMD FSR Different from NVIDIA DLSS?

One of the biggest differences between NVIDIA DLSS and AMD FSR is compatibility. DLSS uses a method called Temporal Upscaling that relies on Artificial Intelligence (AI) and Neural networks. DLSS collects data from multiple frames and combines it into one with the help of AI on dedicated tensor cores present on its RTX GPUs. However, these dedicated cores are only present on NVIDIA RTX GPUs and hence are proprietary in nature. That means DLSS is limited to the NVIDIA RTX 20- and 30-series graphics cards.

AMD FSR, on the other hand, will be available on a host of compatible graphic cards, ranging from the old Radeon RX 460 all the way to AMD’s latest Radeon RX 6000 series. But the biggest surprise here is that FSR will also be compatible with NVIDIA cards, starting from the 10/16 series to the latest RTX 30-series. So GeForce GTX 1070 graphics cards owners who were sore about not having DLSS can now look forward to AMD’s new upscaling technology.

The compatibility with NVIDIA GPUs is made possible because FSR works at the shader level of the process. AMD FSR does not collect data from multiple frames or relies on AI and instead focuses on spatial upscaling. Furthermore, this means developers will find implementing FSR in games much easier because of fewer data inputs.

AMD FSR vs NVIDIA DLSS 2.0: Which is Better?

While AMD FSR improves visual quality and overall performance, early benchmark scores show that it’s not quite the DLSS killer it was touted to be, and for good reason. As we explained above, NVIDIA DLSS 2.0 is a dramatically different technology and employs far more sophisticated means to upscale content.

While FSR uses the source image it receives to upscale content, DLSS has an arsenal of different methods like motion vectors and temporal feedback from previous frames. NVIDIA also has a trained AI that uses 16K images to provide a high-quality experience to gamers. DLSS delivers better image resolution that is near indistinguishable in comparison to AMD FSR. Moreover, with Nvidia releasing RTX 3050 and RTX 3050Ti laptop GPUs, more products in the market now support DLSS technology.

Recent benchmarks of games like Godfall and Riftbreaker show that FSR makes the output image sharper and clearer, which is easily noticeable while gaming. There is occasional blurriness and softness in games when really pushing FSR to its limits on performance that is not present in DLSS. Keep in mind, since FSR was unveiled recently, so it will be some time before detailed benchmarks are available.

From the looks of it, while AMD FSR is definitely an added bonus on a games’ existing supersampling settings, it doesn’t pose a big challenge to competitors like NVIDIA’s DLSS. However, given the open-source nature of FSR, it’s going to be easy for game developers to implement this technology. Gamers without DLSS looking to find that perfect balance between running a game smoothly and with better textures should use FSR on their PC.

How Do I Enable or Turn on AMD FSR?

You don’t need to do anything special to enable AMD FSR. You don’t need to tweak any settings from the Radeon Graphics software on your PC. Simply make sure to install the latest drivers for your compatible GPU.

Then, open any supported game, and jump into the graphics or video settings. Here, you will find the new “AMD FidelityFX Super Resolution” setting. Choose one of the four modes we listed above, and enjoy a super-smooth and high-fidelity gaming experience.

List of Games That Support AMD FSR (Current and Upcoming)

As of writing this article, there are only 7 games that currently support the AMD FSR (FidelityFX Super Resolution) technology on PC. These games as follows:

Here are some upcoming games that will support AMD FSR:

Furthermore, AMD has partnered up with over 40 game developers, so expect more games to support FidelityFX Super Resolution soon. 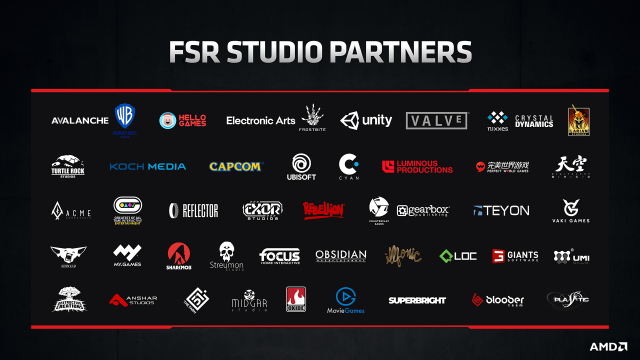 The following graphic cards support AMD’s FidelityFX Super Resolution technology right now. We will update the list below if AMD decides to bring FSR support to more GPUs or adds new cards to its portfolio.

Apart from Radeon and Nvidia graphics cards, AMD FSR will also be available on next-gen consoles, including

For the ones who are excited about AMD FSR but can’t find their favorite game on the above list, don’t worry. AMD has started a small survey where you can fill a short form asking for FSR support for up to three games. If enough people submit the same game, AMD will move it up the list and bring FSR to it faster than other titles. So fill out this official form and put in your favorite games for an enhanced gaming experience.

We hope this guide helped introduce you to the new AMD FSR technology. AMD has been on a roll when it comes to hardware. From the new Ryzen 5000-Series GPUs to the upcoming Exynos chip with an AMD GP, the company has every gamer’s attention. As time passes, we will see more benchmarks surface online, and we should have even a better idea of how AMD FSR will compete against DLSS. Until then, let us know what you think about FSR and if there’s anything we missed in the comments below.