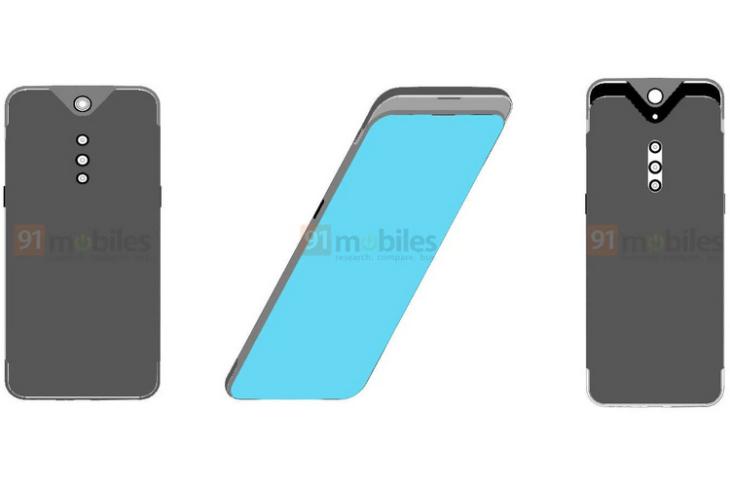 Just when you thought smartphones with slider designs, like the Mi MIX 3, the Honor Magic 2 or the Doogee Mix 4 may be a thing of the past, it turns out that Vivo has filed for a patent on a phone with a slider mechanism to house the front-facing selfie camera. If implemented, the new design is expected to offer a true full-screen display in smartphones while eliminating the need for unseemly punch-holes, notches or popups. As can be seen from the image(s), the sliding portion lifts up to reveal what seems to be an LED flash at the back, but the one oddity that strikes you immediately, is that they seem to show no separate selfie-camera cutout on the slider.

It’s not immediately clear as to whether Vivo plans to combine a rotating mechanism alongside the slider, like the Samsung Galaxy A80 released last year. While the Vivo patent seems to suggest that just one the four cameras on the device might be part of the rotating mechanism, the Galaxy A80 has three cameras, all housed within the sliding+rotating part. When users select the selfie mode in the camera app on that device, the three cameras automatically pop-up from the back of the phone and rotate.

Vivo’s plans about its new patent are not immediately known, but one would imagine that the first device to feature the new design might part of the company’s ‘NEX’ series of smartphones that is known for innovative designs and experimental form-factors. Having said that, the new design is still seemingly in the experimental stage, so it remains to be seen if it will ever make it to an actual commercial product in the first place.

While many brands have tried out the sliding mechanism over the past couple of years as a possible solution towards offering a true full-screen display without intrusive punch-holes, unaesthetic notches or unreliable popups, the design hasn’t really caught the imagination of the consumer, which means it still remains an exception rather than the rule. It now remains to be seen whether Vivo is planning to give it one more try and if it does, whether that will help popularize the design in the days to come.