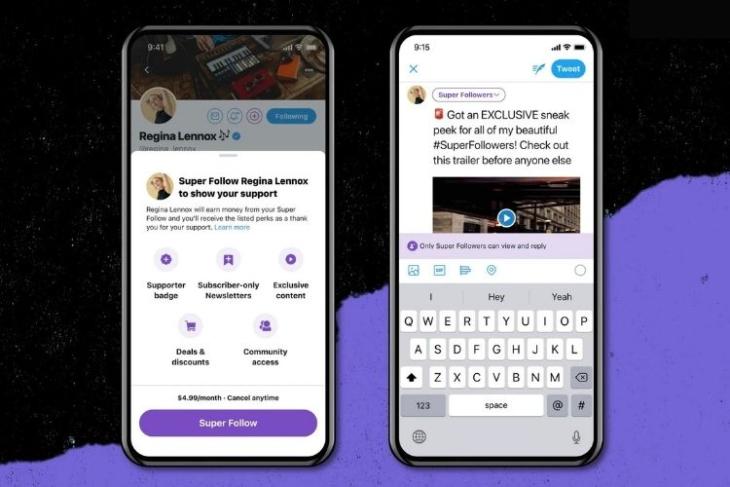 Though Twitter is dealing with a recent warning from the Indian government to comply with the new IT rules, it is not holding back the development of new features. Twitter is working to introduce the “Super Follows” feature very soon. Following its initial mention back in February, more details have now been revealed by a reliable tipster.

New findings by reverse app engineer Jane Manchun Wong (@wongmjane), who first discovered the feature, revealed the first looks of the UI, categories, and other options of the Super Follows application process. You can check out Wong’s tweet right below.

notably, “Adult content” and “OnlyFans” are mentioned in the category and platform sections https://t.co/qSEjh0ohm8 pic.twitter.com/yvkzx672V2

For the unaware, Twitter has been working on the Super Follows feature for quite some time now. The feature essentially allows Twitteratis with more than 10,000 followers to charge a subscription fee to deliver exclusive and additional content to a group of followers.

The “super followers” of a user will get extra benefits such as exclusive tweets, access to a community group, and unique supporter badges. So, it is similar to Patreon or Twitch Prime, a membership that lets users monetarily support their favorite content creator in return for additional perks.

Wong, as you can see above, has revealed how the Super Follows application process might look for the creators. Moreover, there are a few requirements that a user must possess or do to be eligible to apply for Super Follows.

Starting off, a user must have 10,000 or above followers. Plus, they must have sent out at least 25 tweets in the past 30 days, and need to be 18 or above. So, if a user meets these requirements, they can apply to get the Super Follows feature activated on their Twitter profile.

Before using the feature, users have to submit an application to Twitter for verification processes. Upon submission, a team will review the profile and make sure that it meets all the requirements, and get back to the user within 10 days.

Moreover, there are an array of options in the Content category section. And a notable observation by Wong reveals that there are mentions of “Adult content” and OnlyFans” under the Content Category and Platform sections respectively.

So, this is how Twitter users will be able to apply for the upcoming Super Follows feature. The micro-blogging giant recently introduced its new subscription-based model Twitter Blue in various regions. Hence, with the Super Follows feature, the company is offering creators and influencers on Twitter a chance to create a subscription-based model for their personal handles.

What do you think of the new Super Follows feature? Are you going to super follow your favorite content creator once it is live on the platform? Let us know your thoughts in the comments below.