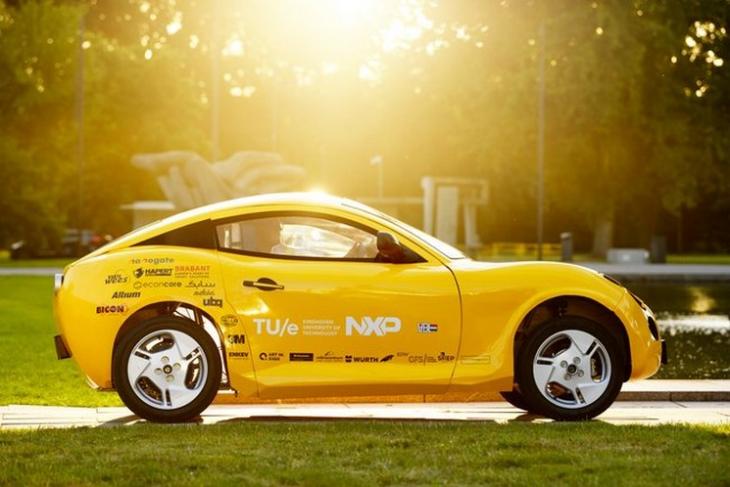 Although humans have evolved to be the most intelligent species in the world, we still haven’t figured out how to restore our continuously-degrading natural environment. A number of major companies are doing their part to save our environment. Similarly, a team of 22 students from the Eindhoven University of Technology has built a compact and sporty electric car that is made from plastic waste, fished out from the oceans.

Dubbed as “Luca”, this cute-looking EV, as per the team behind the project, has been developed to “demonstrate that you can reuse this waste in a useful manner”. The students of the TU/e have been working on this project for the past one-and-a-half years. Now, they unveiled the final product of their hard work recently via an official blog post.

Coming to Luca, the EV is as compact as it can get (might be even smaller than the smallest EV out there). Two electric motors attached to its rear wheels deliver the necessary power to drive the car at pretty high-speeds.

“Luca”, with its compact, lightweight design, can go up to speeds of 90kmph (~56mph) with a total range of 220km (~136 miles) in a single charge. This is mainly due to the fact that the car weighs only 360 kg without the batteries inside. That is almost 50% lighter than similar EVs in the market. Moreover, the batteries of this car weigh only 60 kgs instead of the 100 kg-batteries of traditional EVs.

Inside this “trash”-EV (literally), the team built two seats with the husk of coconuts and strands of horsehair. They also used recycled PET (Polyethylene terephthalate) to wrap the seats.

Coming to the main chassis of “Luca”, the team developed a unique “sandwich panel” in collaboration with various companies. Moreover, they used plastic-waste, which is taken from the oceans, and combined it with natural flax-fibers to give the EV a strong exterior body. The students also mention that as PET is the primary material used in the car and it cannot be recycled more than 10 times, its lifespan can be increased drastically by using it in cars like this one. “After all, ten cars last longer than ten plastic bottles,” read the official post.

Moving ahead in the future, the team is aiming to have “Luca” inspected to meet safety standards and then eventually launch it on public roads. According to the students, this car might encourage other car-manufacturers to consider re-using plastic waste as a primary material to build cars.