Skip to content
Home News The UK Got Its First-Ever EV-Only Service Station; Charge 36 Electric Cars at Once 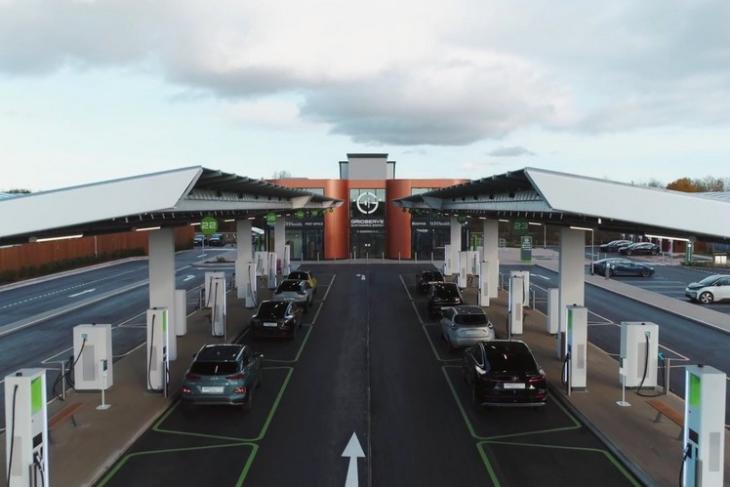 With an aim to help existing owners of electric vehicles (EV) charge their automobiles and to encourage people to get more EVs, the United Kingdom recently unveiled its first EV-only service station in the country. It is a major feat achieved by the country as the said service station will be able to charge juice-up around 36 vehicles simultaneously, delivering a peak power output of a whopping 350kW.

Located in the town of Braintree, Essex, this EV-only service station has been developed by a UK-based company, Gridserve that deals with renewable energy.

Now, the company invested in a lot of advanced technologies to generate the required power to charge up the EVs. Apart from the array of solar panels atop the roof of the service station, there is a not-so-far-away 60-acre field packed with many more panels. These panels, along with the ones on the roof, generate around 10gW (Giga Watt) of power.

Now, as of now, there is only one outlet of the Gridserve EV-only service station which, as I mentioned, is in the town of Braintree. However, the company says that it plans to open hundreds of more such stations around the country in the near future, although there aren’t any new ones that currently being built.

This station was also supposed to open a bit earlier. However, due to the ongoing pandemic, the company had to delay the inauguration of the solar-powered EV-station in Essex. So, once the pandemic ends, we hope Gridserve will get back to full-fledged operations to achieve its expansion goals.

You check out the entire service station in a video shared by the EV-focused YouTube channel, Fully Charged, right here: