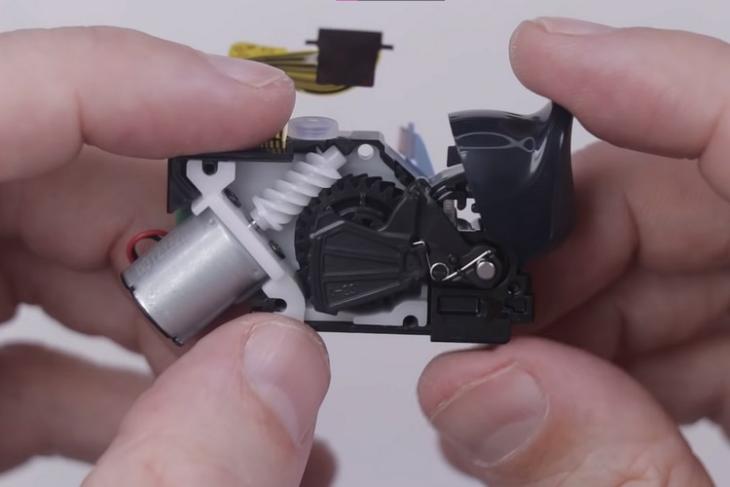 Sony, before the unveiling the design of its upcoming PlayStation 5 console, unveiled the new “DualSense Controller” for the PS5 with a ton of new changes. One of these features includes an entirely new and unique system for the L2 and R2 trigger-buttons which enables the controller to adapt to a game you are playing and adjust the tension of these buttons. This will give players different sensations for different in-game activities as they have to apply a different amount of pressure every time the button-tension changes.

This is a pretty unique feature of the DualSense controller and it has been praised a lot by several critics of the tech community. Now, one YouTube channel, TronixFix, recently tore down the controller to check out its internals. And he discovered that the new “Adaptive Trigger” system features a super-advanced mechanism based on several gears and sensors.

So, for starters, the new adaptive trigger modules are massive compared to the trigger buttons of the DualShock 4 controller. And putting them side-by-side will give you a glimpse of how far Sony has come with its tech to make the DualSense controller a really advanced gaming tool.

Now, as you can see, there is a massive difference between the two components of the controllers. The latest one uses a really intricate mechanism with a motherboard of its own and a few gears. There is also a lever-like part connected to one of the gears and this adjusts itself to create a resistance for the actual trigger button of the controller. All in all, the mechanism is really advance and the engineering team did a really good job with it.

The YouTuber also takes the time to point out the fact that even though the whole adaptive trigger module for each of the buttons is replaceable, one can also replace every tiny component of the system.

So, if a single gear of the adaptive system of one of the buttons gets damaged, a technician can replace that single gear, as all of the components are easily accessible. This is because, unlike other companies that shut these systems with glue to prevent third-party repairs, Sony used screws to shut the contraption, and kudos to them for that.

Moreover, the new DualSense controller is much more advanced in every aspect when compared to the DualShock 4 controller. It has a much bigger battery, better haptic motors, and a really good physical build.

Apart from taking an in-depth look at the adaptive triggers, the YouTuber compared every component of the DualSense controller with its predecessor, the DualShock 4.