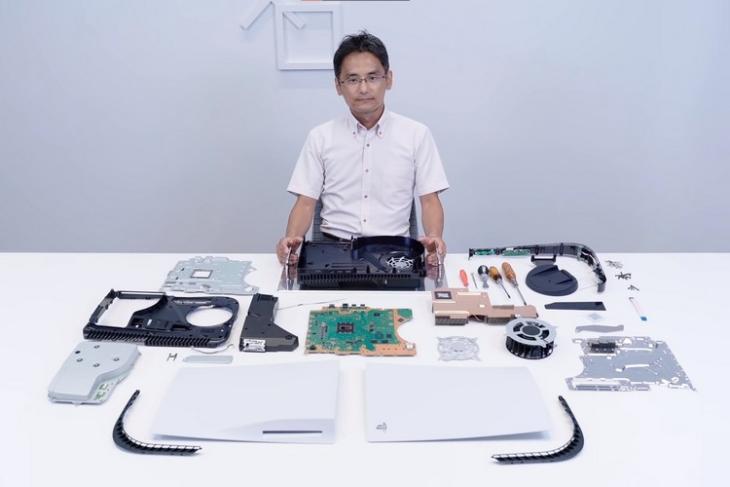 Microsoft, since the unveiling of its Xbox Series X, has revealed a lot of information about their upcoming gaming console. On the other hand, its arch-nemesis, Sony was much quieter about the PlayStation 5 for a long time before finally unveiling it for the public earlier last month. Now, the company has posted an official teardown video of this next-gen console to showcase every component inside it.

The video was recently uploaded to PlayStation’s official channel on YouTube. In the video, Yasuhiro Ootori, the VP of Mechanical and Hardware Design at Sony Interactive Entertainment, split open the PS5 to reveal all the parts and components of the device.

Now, prior to the actual teardown of the console, Ootori pointed out all the I/O which the PlayStation 5 comes with. He then mentions that the two rows on the front of the device are the air vents, that suck in air from the outside, and the entire rear side is the exhaust port for the air to pass out.

One last thing the Sony engineer showed off before the teardown is how the user can easily unscrew the circular base and re-attach it to change the orientation of your console from vertical to horizontal. There is even a dedicated magnetic slot inside the base to store the screw inside it.

Now, following this base-trick, Ootori finally started to take apart the PS5, revealing all of the components inside.

Ootori then mentions that both the white side panels can be removed easily, without needing any special tool. Under these side panels, there is a huge cooling-fan that draws air from both sides of the console to keep it cooler than its predecessors. You also have two dust catchers, where all the collected dust accumulates until the user vacuums it out. An M.2 slot is also present on board to enable users to expand their storage.

Further, Yasuhira continued to deconstruct the device slowly, showing all the inside-components such as the ultra HD Blu-Ray drive unit, the insane (and massive) Heatsink system, the entire motherboard, and the power supply unit.

Moreover, while he disconnected the components from the device, he explained what the team did to make them more high-end and advanced. For instance, according to Ootori, the team has developed a special liquid metal for two whole years to tackle the heating issues of the device. This liquid metal helps to spread the heat in the massive heatsink to keep the device cooler than ever.

You can check out the 7-minute teardown video from PlayStation right below. The entire video is in Japanese so make sure you turn on auto-generated captions for the English translations.