While it’s pretty straightforward to capture screenshots on iPhone with the combination of home/volume and side buttons, it doesn’t always seem to be the right or convenient way. Times when the buttons of the iPhone get damaged/don’t work or the pronounced buttons of the case installed on the device seem to be too stiff to offer a quick click, an alternative way to take screenshots without using any buttons on the iPhone become the preferred method. And that’s precisely what I’m going to talk about in this article.

Take Screenshots without Using Any Buttons on iPhone

Some people have difficulty in pressing the physical buttons, especially the differently abled ones. Therefore, it’s apt to have alternate methods that can make it painless to capture screenshots on the iPhone without having to deal with physical buttons.

Thanks to AssistiveTouch, snapping screenshots on an iOS device is incredibly easy. Once you have set it up, all you need to do to snap the screen is just a quick tap. What’s more, the all-new back-tap feature introduced in iOS 14, also lets you take screenshots by just tapping twice or thrice on the back of your iPhone.

In this guide, we have discussed both the methods so that you can pick the one that fits your convenience. So, let’s get going!

First off, we have to enable AssistiveTouch and ideally set it up to snap screenshots.

4. Tap on AssistiveTouch and then turn on the toggle. 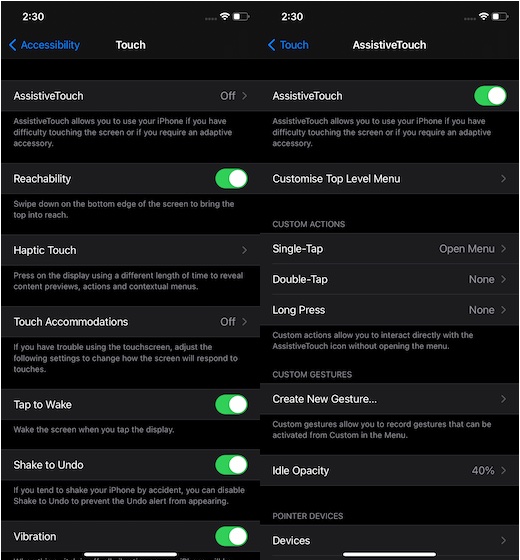 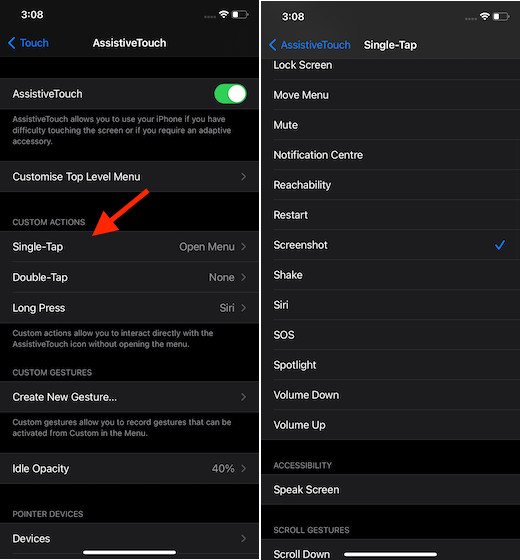 Similarly, you can also choose to customize the double-tap or long-press actions to take a screenshot on your device.

To begin with, we need to set up the Back Tap feature to capture screenshots.

4. Next up, tap on the Back Tap option at the bottom.

5. Up next, select Double Tap or Triple Tap option and then select Screenshot. After that, quit the settings. 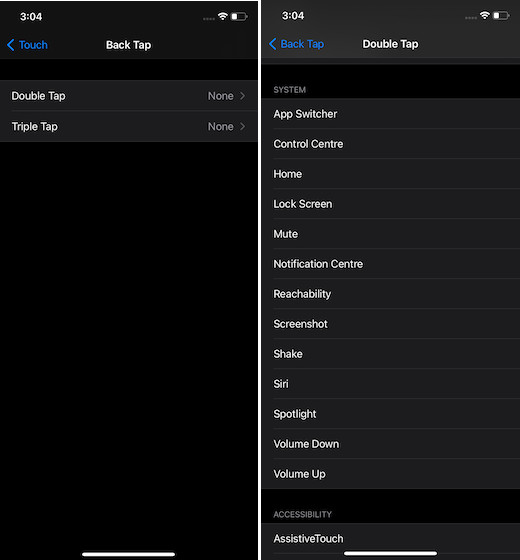 Going forward, you can snap the screenshot on your iOS device just by double or triple tapping on the back of your device.

Snap Screenshots on iPhone without Using Any Physical Buttons

So, that’s how you can make the process of taking screenshots a tad easier on your iPhone. Personally, I prefer to use AssistiveTouch to snap screenshots as I find it super convenient.

By the way, what’s your favorite method of taking a screenshot on iPhone? It would be great to have your feedback.