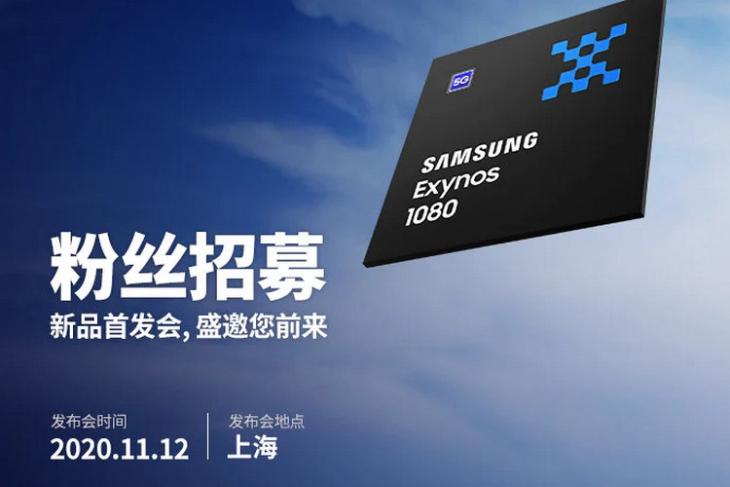 Almost a month after revealing a few key details about its upcoming Exynos 1080 mobile SoC, Samsung Electronics has announced that it will be officially unveiled on November 12. Expected to replace the Exynos 980 as the company’s upper mid-range mobile processor, the Exynos 1080 will be built on an efficient 5nm process that’s said to be the same LPE node used for the upcoming Snapdragon 875 SoC.

That’s according to Samsung Semiconductor China Research Institute director, Dr. Pan Xuebao, who revealed last month that the chip will come with the all-new ARM Cortex-A78 CPU cores and the ARM Mali-G78 GPU. He also claimed that the chip exceeds 650,000 points in AnTuTu even as it remains under development. For comparison, top-shelf Android phones with the Snapdragon 865 hover around the ~600,000 mark, so the upcoming processor certainly seems promising.

It is worth noting that Samsung is rumored to be working on two different mobile processors, at least one of which is said to feature AMD graphics. While one of them is the Exynos 1080, the other is believed to be the Exynos 2100, which is expected to power the company’s flagship Galaxy S21-series smartphones next year. While there’s not a lot of information on that front, it is expected to sport ARM’s Cortex-X1 Super CPU core, as per recent reports.

There doesn’t seem to be any further information about the Exynos 1080 at this point, but reports suggest that Vivo will be the first company to launch a phone powered by the new chipset. While neither Samsung nor Vivo has confirmed the exact model, tipster Ice Universe (@UniverseIce) has claimed that the Vivo X60 might be the first device to be powered by the upcoming chipset.