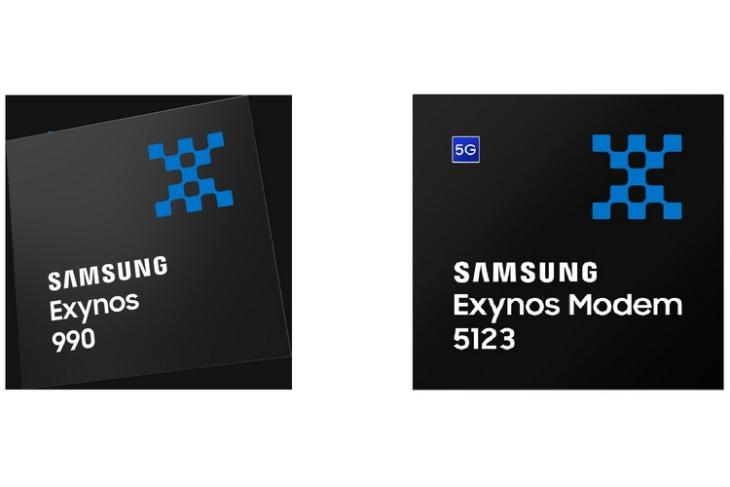 At its Samsung Tech Day event on Wednesday, the South Korean electronics giant announced the brand new Exynos 990 mobile processor and the Exynos 5123 5G modem. Built on 7nm EUV manufacturing node, the former is expected to power the company’s flagship smartphones next year, including the Galaxy S11. Both the Exynos 990 and Exynos Modem 5123 are expected to go into mass production by the end of this year.

The Exynos 990 comes with an octa-core CPU that comprises of 4x low-power Cortex A55 cores, 2x performance-oriented Cotex A76 cores and 2x custom Exynos M5 cores, although the exact clock speeds are yet to be revealed. The graphics processing duties will be performed by the ARM Mali G77MP11 GPU, but again, there’s no word on the how exactly it’s clocked. Another notable change is the support for LPDDR5 RAM.

The Exynos 990 also comes with a dual-core Neural Processing Unit (NPU) and a new DSP with a computational throughput of 10 TOPs, but it’s not immediately clear as to whether Samsung is referring to the DSP’s standalone capability or the combined capabilities of the NPU and DSP. According to the company, the SoC is both faster and more power efficient than the Exynos 9825, which powers the Galaxy Note 10 in many markets.

Samsung also announced the Exynos Modem 5123 for 5G connectivity, but it will likely be added on to the new SoC as a discrete chip instead of being integrated with it from the getgo. The 5123 will support Cat.24 download speeds of up to 7.35Gbps on 5G and up to 3Gbps on LTE. It will also support up to 108MP camera sensors natively, as well as 120Hz refresh rates for the display panel, making it ready for the latest in smartphone technology.