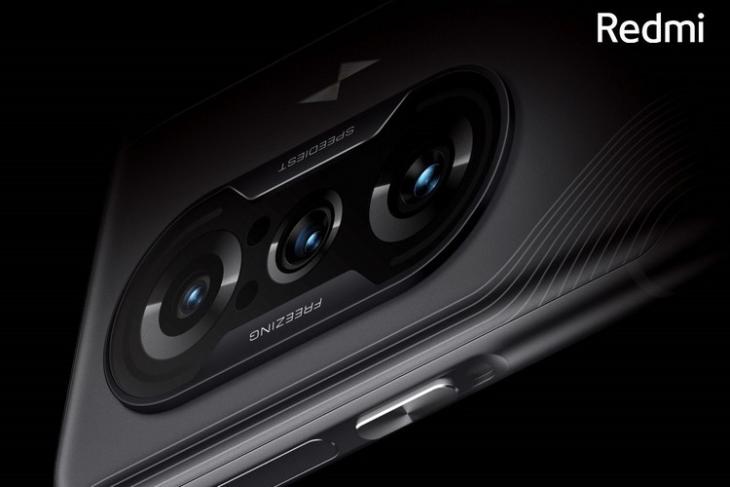 Redmi recently released a teaser GIF image along with the official launch date for China on its Weibo handle. The teaser image shows off the triple-camera module with a dynamic backlight and pop-up shoulder buttons on the Redmi K40 Game Enhanced Edition. The shoulders pop up from the chassis with a trigger button, which most likely enables the gaming mode on this device. You can check out the GIF image right below.

As you can see, the device has a gamer-esque vibe with the light-up camera module and the pop-up shoulder button. While the backlighting of the camera module comes as a surprise, we already knew about the shoulder buttons of the device from our previous report. It resembles the integrated pop-up buttons on the Black Shark 4 lineup, which launched in China recently.

Apart from the teaser images, Xiaomi also registered two devices with model numbers M2102K10C and M2104K10C with the 3C authority of China recently. These devices are speculated to be the two variants of the Redmi K40 Game Enhanced Edition. They come with 5G connectivity and superfast 67W charging.

As per previous rumors, the Redmi gaming phone will feature a 6.67-inch Samsung E4 AMOLED display with a 144Hz refresh rate. Inside, there will be the MediaTek Dimensity 1200 chipset and a huge 5,000mAh battery with support for fast charging.

Coming to the optics, the triple-camera setup on the Redmi K40 Game Enhanced Edition might feature a 108MP or a 64MP primary sensor. Although details about the other two lenses are scarce at the moment, we can expect the device to feature an 8MP ultra-wide lens and a 5MP telephoto sensor much like on the Redmi K40 Pro and Pro+.

Other than this, we do not know much about the other specifications of the Redmi K40 Game Enhanced Edition. However, Xiaomi will likely share more details as we near the launch date.

As for the price, the device might cost around CNY 2,000 (~Rs 23,014) in China. Xiaomi, as per our previous report, is also aiming to bring the device to India in the coming months. However, it will be a Poco F-series device here. Meanwhile, the Chinese giant will also be launching the Redmi K40 lineup in India as the Mi 11X-series along with the Mi 11 Ultra later this week.