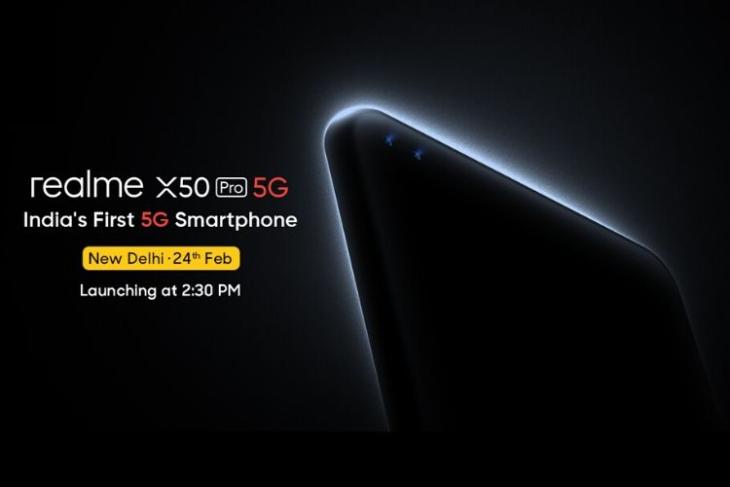 Over the past couple of weeks, Vivo’s gaming-centric sub-brand, iQOO, has been running its campaign centered around the fact that it will bring the first Snapdragon 865-powered 5G smartphone to India. But, in an unexpected turn of events, Realme has today made a surprise announcement, wherein the company has confirmed that it will be the first to launch a Snapdragon 865-powered 5G smartphone in India.

In an official tweet sent out by Realme Mobiles just minutes ago, the company has today announced that it’s going to launch India’s first 5G smartphone, Realme X50 Pro on February 24 in New Delhi. This is a sly move on the company’s part, who recently moved its launch event from MWC 2020 to online, and now to New Delhi in an attempt to steal a bit of thunder from a new entrant, i.e iQOO, in the flagship segment.

Launching #realmeX50Pro at 2:30PM, 24th Feb. Excited?
RT using #real5G and stand a chance to get invited for the launch. pic.twitter.com/Ai8xsjK8uX

Realme has been teasing the feature set for its upcoming flagship on social media for a long time now. We already know that it will feature a 90Hz Super AMOLED display with dual-camera punch-hole design, Snapdragon 865 with 5G support, LPDDR5 RAM, quad rear-cameras, and finally, 65W SuperDart charging (allowing you to fully juice up your device in about 30 minutes).

Though it’s exciting to see Realme bring a 5G-supported smartphone to India, I’m not a huge fan of their marketing stunts. The company could have happily launched its latest Snapdragon 865-powered phone at Madrid, streaming it online for the fans, and then it could have brought it to India next month. But, in an attempt to be the first to launch a 5G-supported phone in the country, it’s essentially chewing the flesh off the bones for a new fish in the pond.

Marketing tactics aside, tell us which phone are you more excited to check out – Realme X50 Pro or iQOO 3? Share your thoughts in the comments below.