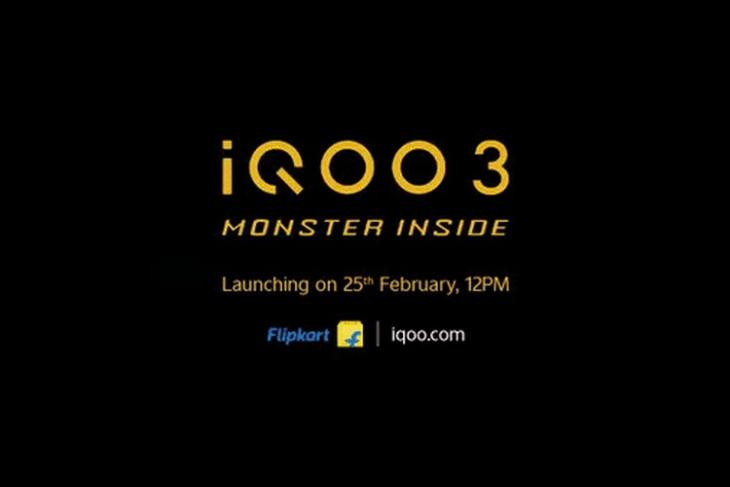 Having incessantly teased its entry into the Indian market over the past few weeks, Vivo’s gaming-oriented smartphone brand, iQOO, has finally announced a concrete date for the launch of its first device in the country.

In an official tweet, the iQOO India account announced that the first iQOO gaming-centric smartphone will be launched on February 25 in India, as suggested by earlier rumors. As expected, the upcoming device will, indeed, be the company’s next flagship, the iQOO 3, and will be available exclusively on Flipkart. The device is also confirmed to launch in China on the same day.

Earlier teasers had confirmed some of the key aspects of the upcoming phone, including the fact that it will be a premium, high-performance device powered by the Snapdragon 865 chipset. The company has also been hyping up the fact that it will be the first 5G smartphone to officially launch in India, which is certainly noteworthy, given that Samsung is planning to bring only 4G versions of its newly-launched Galaxy S20-series devices in the country.

Earlier last month, iQOO officially confirmed its plans to enter the Indian market with the global launch of a new 5G smartphone powered by the Snapdragon 865 SoC. Talking to NDTV, the Marketing Director of iQOO India, Gagan Arora, stated that the device will also include ‘best in class technology’ related to battery, although, he refused to elaborate on the matter any further. According to him, “iQOO has the potential to become a global brand. And with that thought, India will be the first market outside China.”

According to a recent listing on TENAA, iQOO 3 is expected to come with a 6.44-inch full HD+ AMOLED display, the Snapdragon 865 SoC, up to 12GB of LPDDR5 RAM, 256GB of storage and Android 10 out-of-the-box. On the imaging side of things, iQOO 3 will come with a 48MP or 64M-backed quad-camera system, coupled with a 13MP+13MP+2MP setup at the back and a 16MP selfie shooter. It is also said to carry a 4,370mAh battery with 55W fast-charging support.

So, are you excited for the launch of another gaming phone in India? That too one with hardware and software features to take on the likes of Asus ROG Phone and OnePlus 7T. Let us know your thoughts in the comments below.