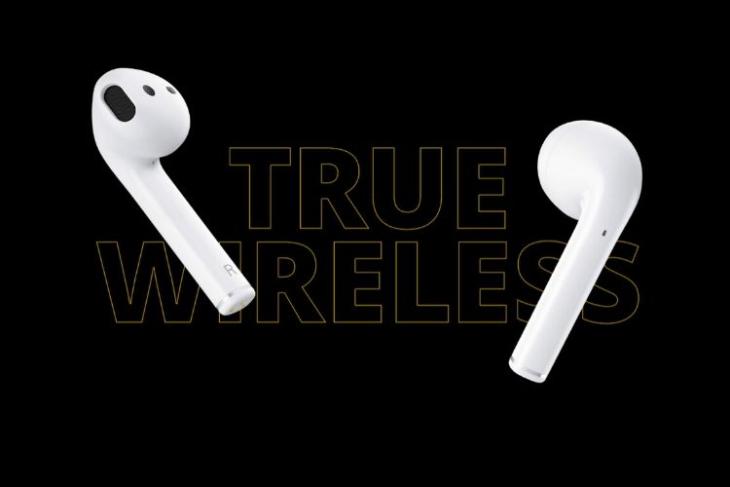 Alongside the much-awaited Snapdragon 730G-powered variant of the Realme XT, the company is also known to be launching its truly wireless earbuds on December 17 next week. Realme has been teasing its wireless earbuds since the X2 Pro launch, sharing a number of real-life images, and teasers online. But today, Realme has gone ahead and confirmed the earbuds will officially be called Realme Buds Air.

Realme today took to Twitter to officially reveal the official branding for its truly wireless earbuds. They are dubbed the ‘Realme Buds Air’ and the name only adds yet another similarity to Apple AirPods. You can see in the teaser here, Realme seems to have cloned the original AirPods down to the tee. It’s not just the earbuds (with its sensor placement and touch controls) but the charging case as well.

We are here with music to your ears.
Introducing #realmeBudsAir, the new generation #TrueWireless & #RealSeamless experience.
Launching at 12:30 PM, 17th December.
Stay tuned to our social channels and https://t.co/HrgDJTZcxv
Know more: https://t.co/4aHmvSiQOo pic.twitter.com/mSvPCfDrOZ

A dedicated landing page for Realme Buds Air is now live on the company’s website. It’s revealed that the truly wireless earbuds will feature 12mm Bass boost drivers, Bluetooth 5.0 support for instant auto-connection, and touch controls to answer/reject calls and control music playback. Realme also states that you will simply need to open the case to connect the earbuds – but possibly with its own phones.

On the purchase of any of its recently launched devices, Realme is offering a Rs. 400 discount coupon for the Realme Buds Air until 16th December for free. Alternatively, you can choose to be notified about these wireless earbuds launch and share this activity on your socials to stand a chance to win the discount coupon.

Realme may have gone ahead and cloned Apple AirPods, but the Realme Buds Air will be super popular among the youth if the company gets the pricing right. I too would love to try these out myself to hear the difference in audio quality. We expect these to be priced around Rs 4,500-Rs 5,000 to annihilate the competition from brands like JBL, Noise, and others. What are your expectations from the Realme Buds Air? Let us know down in the comments section.