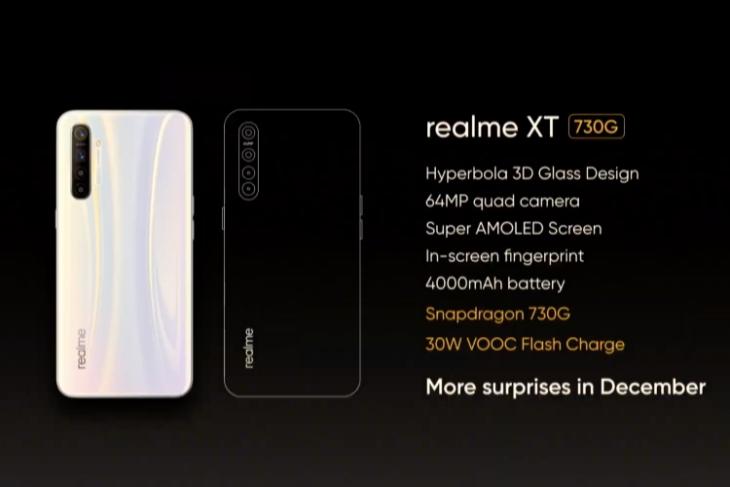 At its Realme XT launch event earlier today, the company’s CEO, Madhav Sheth, announced ‘More Surprises’ coming in December. While there are no immediate indications as to what those surprises might be, the one thing that has been officially confirmed is a more powerful, gaming-focused variant of the Realme XT.

Rumored to be marketed as the Realme XT Pro, the upcoming device will be powered by the Snapdragon 730G SoC, a gaming-oriented take on the standard 730, with an overclocked Adreno 618 GPU and support for the Vulkan 1.1 library, which Qualcomm says is 20 percent more power efficient than OpenGL ES. The device will also come with 30W VOOC Flash Charge instead of the 20W VOOC 3.0 charging in the standard XT.

This December, we have more surprises coming for you all along with realme XT 730G. Stay tuned!#DareToLeap pic.twitter.com/qbBAd14wRc

It’s worth noting that a recent listing on the website of Chinese electronics regulator, TENAA, has already revealed that Realme has been working on a phone powered by the Snapdragon 730G SoC. Listed as the Realme RMX1991, the device is largely identical to the Realme XT in terms of its hardware specs, apart from its processor.

While there’s no guarantee that this is, indeed, the device Sheth is referring to, it’d be a massive surprise if it isn’t. Earlier rumors had suggested that Realme will also launch a ‘Pro’ version of the Realme XT at some stage, so it will be interesting to see if this is it.