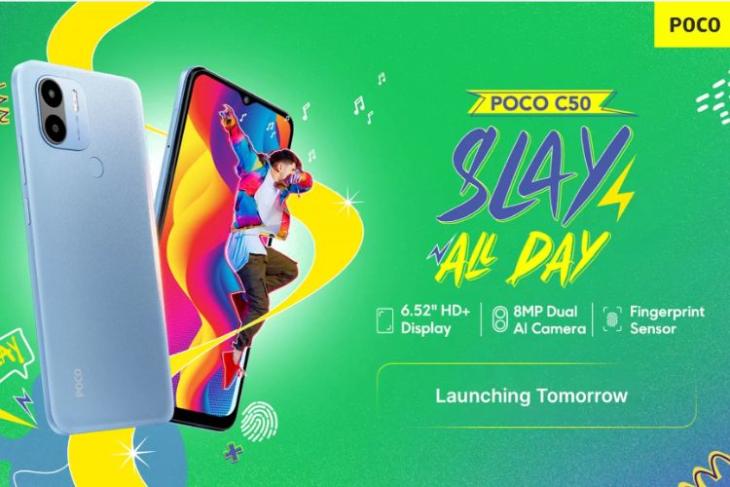 After some teasing, Poco has now revealed that it will launch the entry-level Poco C50 in India tomorrow. The phone will succeed the Poco C31 and can also be considered the rebranded version of the Redmi A1+, which launched in India recently. Have a look at the details below.

The information comes with Poco India’s Twitter handle. The phone also has a microsite on Flipkart, which is Poco’s exclusive sale partner. The Flipkart listing has also revealed a few details about the Poco C50, including its design and specs.

The phone is seen with a leather-like back panel with a square-shaped camera hump. There’s also a rear-mounted fingerprint reader. This is similar to the design of the Redmi A1+. It is seen in light blue but we can expect more color options too.

The Poco C50 is also confirmed to come with a 6.52-inch HD+ display with a waterdrop notch and a 120Hz touch sampling rate. Under the hood, there will be a MediaTek Helio A22 chipset, again, just like the Redmi A1+.

The camera department houses 8MP dual AI rear cameras and a 5MP front camera. There’s a 5,000mAh battery on board with a 10W charger. The Poco C50 will run Android 12 Go Edition. While most of the information has already been revealed, there are a few details that still need to be out, including the price.

Although, expect it to start at under Rs 10,000, considering that the Redmi A1+ starts at Rs 7,499. With this, the phone will rival the upcoming Samsung Galaxy F04, which is also expected to fall in the same price bracket. To get all details about the new Poco C50, stay tuned to this space for information.

Poco C50 with Android 12 Go Launched in India; Check out the Details!