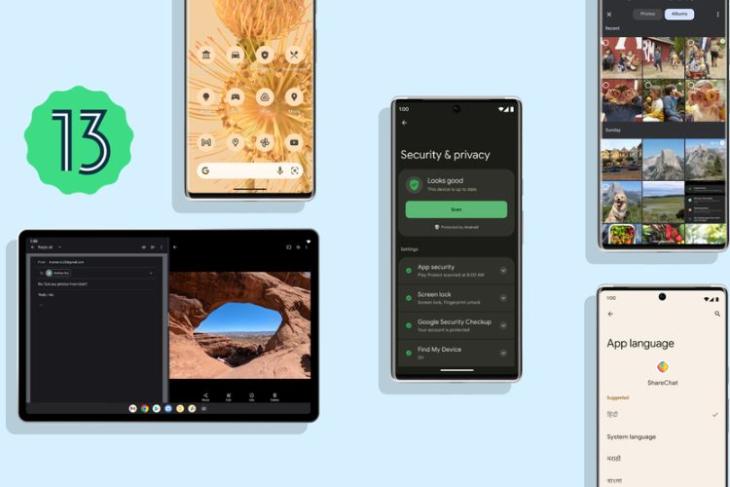 After releasing the developer previews and the first beta build of Android 13, Google has now made its second beta official at the I/O 2022 developer conference. While retaining Android 12’s Material You wallpaper-based theming, the company has added a number of intriguing and useful features. Let’s dive into the details.

Android 12’s Material You design has extended its capabilities with app icon themes and new color styles. There’s also support for the ability to change per-app languages. Plus, there’s the new media control that changes its appearance based on the music it is playing.

There are a number of privacy-focused features as well. Android 13 now includes a new photo picker, which shows two new categories you can control access to: “Photos & videos” and “Music & audio,” instead of Files and Media. This allows you to share the specific media with an app rather than providing access to the entire media library.

Apps will now have to ask if they can send you notifications, and there will be fewer apps asking for location permissions. In addition to notifying users of when the clipboard is accessed, Android 13 will also delete the clipboard history after a while so that apps can’t access any old information. Additionally, a unified Security & Privacy settings page will be introduced in Android 13 later this year to easily access your device’s device’s data privacy and security.

To compete with the likes of Apple Wallet and Samsung Pay, the company has now introduced Google Wallet with the ability to access your cards. It will soon get Digital ID support this year, much like it’s available on Apple Wallet. It will be available for WearOS users too.

As mentioned at the time of the first developer preview release, Google is continuously working to make Android 13 better for tablets by enhancing the multitasking capabilities for users. This includes a new taskbar, easy drag and drops functionality for apps, and the ability to rest one’s hands on the screen while using a stylus. And, Google will update apps on tablets for a better full-screen experience.