Skip to content
Home News Google Shares a Sneak Peek at the Pixel Tablet; Coming in 2023 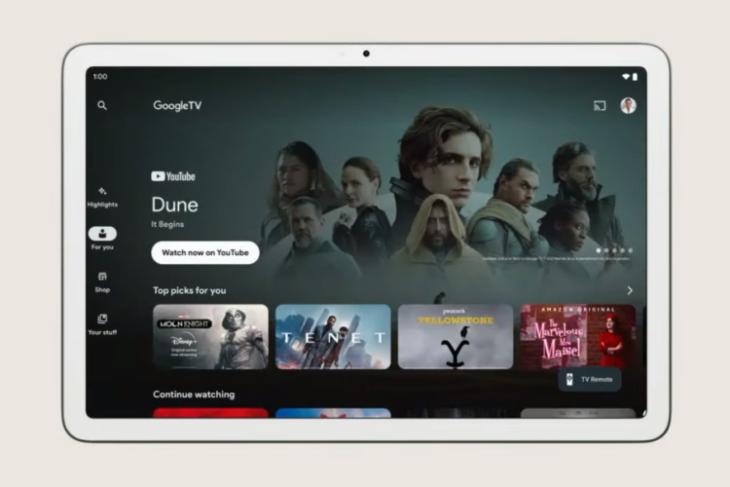 Google I/O 2022 went from being a developer conference to a Pixel hardware showcase towards the end. The Mountain View giant not only unveiled the much-awaited Pixel 6a and ANC-supported Pixel Buds Pro, but it also showed off the Pixel 7 series and the Pixel Watch at the event. That’s not all, though. It went the extra mile and showed off a hardware product it aims to launch in 2023 – the Pixel tablet. Here are all the details.

Witnessing the growing demand for Android tablets among users and improvements for large screen devices coming to Android, Google is readying itself to ship a Pixel-branded tablet. Yeah, the Pixel tablet will arrive in 2023 with the Google Tensor chip and additional Android features for tablet computers.

The tweet attached above gives us a first look at the Pixel tablet design, and it looks like someone detached the Nest Hub Max’s screen to tease a tablet device at I/O 2022. The tablet looks bulky with a seafoam green back and white bezels on the front. It also seems to include one rear and front camera, a fingerprint sensor-laden power button, and pogo pins under the Google logo to connect accessories.

Here, if leaks are to be believed, Google was known to be working on a Nest-branded tablet, and well, this could be it. The company might have rebranded it to a Pixel device, seeing the increase in demand for Android tablets. The pogo pins, as per leaks, will come in handy for connecting the tablet to a Nest speaker.

Why is Google making a tablet again, you ask? Well, the company has been working to improve Android to support large screen devices. It not only debuted a version of Android suitable for tablets and foldable, i.e Android 12L, but is also working to integrate more such features into Android 13. It will be interesting to see what Google’s first in-house tablet since the Pixel Slate (circa 2019) has in store for us. We will, however, have to wait more than a year to experience it. What are your thoughts on the Pixel tablet? Let us know in the comments.