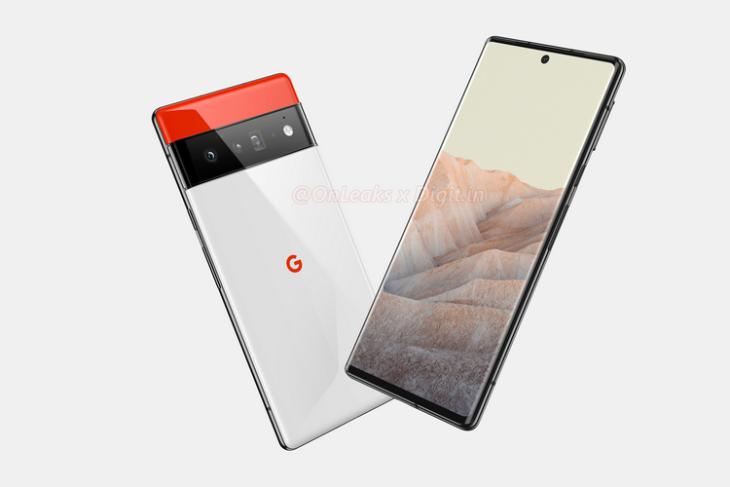 Last week, we saw renders of the upcoming Pixel 6 series from tipster Jon Prosser. The leak was corroborated by Max Weinbach soon after. And now, we have another confirmation for the Pixel 6’s design from reliable leakster Onleaks in collaboration with Digit.

According to the report, Google will release two new devices in the Pixel 6 series – Pixel 6 and Pixel 6 Pro. Yeah, the company is reportedly dropping the XL moniker in favor of the ‘Pro’ branding. The report also reveals a few key specifications of the Pixel 6 lineup.

Notably, the Pixel 6 Pro may flaunt a large 6.67-inch curved AMOLED display. It may come with a punch-hole cutout at the center for housing the selfie camera. The device roughly measures 163.9 x 75.8 x 8.9 mm and has an 11.5 mm thickness, including the camera bump. Renders from Onleaks show a slightly more prominent chin than what we saw on Prosser’s leak. Check out the images below:

One key differentiating factor between Pixel 6 and Pixel 6 apart from the bigger display is cameras. While the regular Pixel 6 is likely to equip dual cameras, the Pro variant will reportedly feature triple rear cameras. The camera setup may include a primary wide-angle camera, a periscope telephoto lens, and a third sensor alongside the LED flash.

Other details about the Pixel 6 Pro mentioned in the report include stereo speakers and support for wireless charging. Google has slightly tweaked the position of the SIM slot too. Under the hood, the Pixel 6 series is expected to feature Google’s in-house SoC codenamed Whitechapel manufactured on Samsung’s 5nm LPE process.