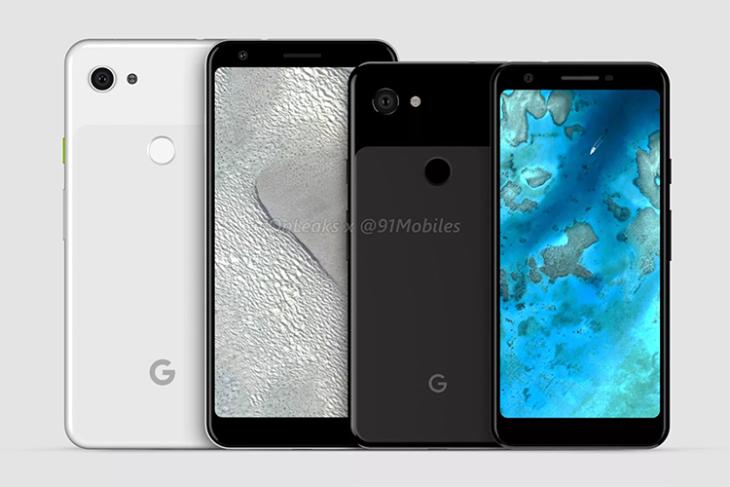 Pixel smartphones are clearly intended to compete with iPhones and Google has not only followed the suit in terms of the lavish pricing but, also by offering specially branded – and equally lavishly priced – accessories and restricting users to the Google ecosystem. Now, Google appears to embark upon the same territory that Apple recently tried to tread on – i.e. of relatively affordable smartphones with a selective mix of affordable and flagship features.

Google is possibly working on a smartphone that will borrow features from the Google Pixel 3 duo without cannibalizing sales of the flagship model, as Apple’s iPhone XR is intended to. We’ve been witnessing the so-called “Google Pixel 3 Lite” in leaks and today we have yet another from reliable leakster Steve H. McFly, popularly known as @OnLeaks.

Partnering with 91Mobiles, OnLeaks has released high-resolution renders of the Google Pixel 3 Lite and the device looks a lot like Pixel 3 but with some nuances that set it apart. Furthermore, the leakster is also confident that a larger variant, supposedly Pixel 3 Lite XL, is also under development.

An interesting bit revealed in these renders is that both – the Pixel 3 Lite and the Lite XL – will feature a headphone jack, which Google seemed to have given up on last year. Another distinguishing feature is the solo speaker instead of the stereo speakers on the Google flagship. Moreover, the front camera comprises a single sensor instead of the dual selfie camera and there’s no notch on either of the smartphones.

Not Powered by Flagship Processors

While this leak by OnLeaks reveals the Google Pixel 3 Lite, as well as the mightier sibling, past leaks have also given us some information about the prospective specifications of the alleged devices.

Firstly, the Pixel 3 Lite will be powered by Snapdragon 670 SoC along with 4GB of RAM, which Google deems sufficient. It is expected to come with onboard storage options between 32GB and 64GB – and, there might not be a 128GB variant. Another speculation says that the XL variant might, instead, rely on a Snapdragon 710.

For photography, the smartphones get a 12-megapixel sensor on the back and a single 8-megapixel shooter on the front. These cameras are expected to come with the best features of the standard Pixel 3, and should have comparable performance – although Google might also save some cost by omitting the dedicated image processing chip – Pixel Visual Core.

Lastly, in terms of battery, while the Pixel 3 Lite would have a 2,915mAh battery, the Lite XL could have a larger battery whose capacity is unknown at the time. When it comes to availability, 91Mobiles says that that two junior-grade Pixel devices will be launched in January 2019 for an expected price of Rs 39,990. At this price, its biggest competitor will surely be the OnePlus 6T and Oppo R17 Pro.

Notably, OnLeaks was the leakster behind Pixel 3 and Pixel 3 XL’s leaks – which turned out to be pretty accurate. So we hope that the new leaks are reliable and precise too.