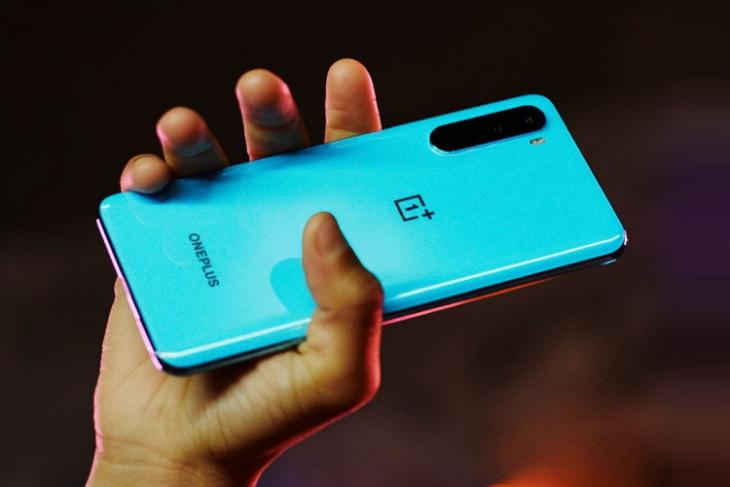 Putting an end to months of hype, OnePlus has finally taken the wraps off its first mid-range phone in five years. OnePlus Nord was unveiled at a first-of-its-kind AR launch event. It will first be made available in India and Europe instead of the US. The device includes a 90Hz AMOLED display, 5G-enabled Snapdragon 765G chipset, dual-selfie camera, and fast-charging support at a really attractive price.

Right off the bat, I know you’re going to say that OnePlus Nord looks like a rebranded Realme phone. That’s exactly how I feel. It looks exactly like the Realme X3. You have the dual-cam punch-hole at the top left on the front and a vertical quad-camera array on the rear. The biggest differentiator is the placement of the fingerprint sensor. It is available on the right edge and doubles as the power button on Realme X3. Whereas OnePlus Nord has an in-display fingerprint sensor. The alert slider is present on the right. 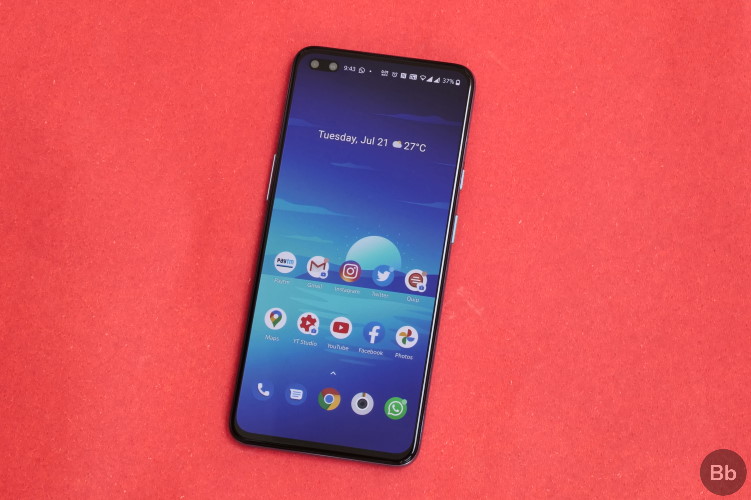 You must have already noticed the dual-camera punch-hole cutout at the top left. The OnePlus Nord arrives with a primary 32MP Sony IMX616 sensor and a secondary 8MP ultra-wide camera with a 105-degree FOV in the punch-hole. This is exactly the same dual selfie camera system as the Realme X3 SuperZoom that launched in India last month.

OnePlus Nord is the company’s first smartphone with a dual selfie camera. 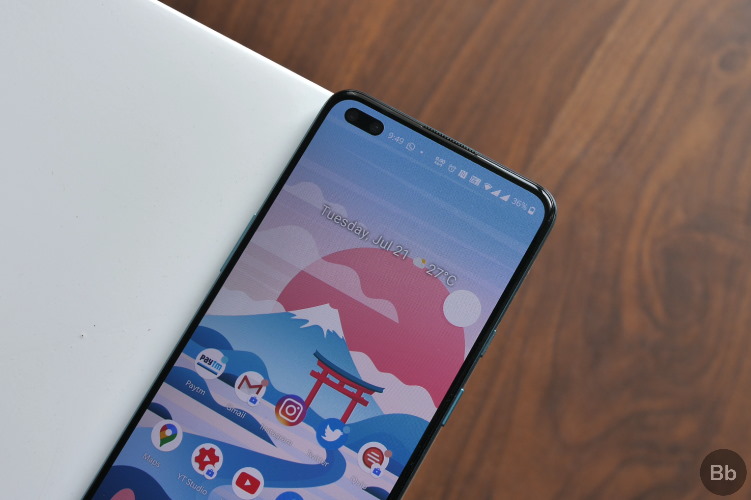 OnePlus had already confirmed that its first mid-range phone in five years will arrive with Qualcomm’s Snapdragon 765G chipset in tow. It is a 5G-enabled chipset that launched alongside the Snapdragon 865, which powers the OnePlus 8 flagship series. Snapdragon 765G integrates the Snapdragon X52 modem, offering download speeds up to 3.38Gbps on a 5G network.

The chipset is paired with up to 12GB of LPDDR4x RAM and up to 256GB of built-in storage. And this is where OnePlus has cut some corners. You don’t get faster UFS 3.0 storage here. The Nord instead comes with UFS 2.1 storage in tow, which is a little disappointing.

One of the things that OnePlus phones are known for is fluid software experience. It brings the best of both worlds — vanilla Android and useful add-on features to users via OxygenOS. OnePlus Nord is backed by OxygenOS 10.5 based on Android 10 out-of-the-box.

The biggest change here will, however, have to be OnePlus’ decision to ditch its own phone and messages app in favor of Google’s stock alternatives. You also get Google Duo pre-installed on the Nord. It will be eligible for two years of software updates (up to Android 12) and three years of security updates, as per the company’s claims.

The camera count matter in the more affordable price segment. OnePlus Nord makes its debut with a quad-camera array on the rear. It is helmed by the exact same 48MP (f/1.75) Sony IMX586 sensor that you will find aboard the flagship OnePlus 8. It will come as a relief to many that the primary camera supports OIS, as well as EIS, to help improve video stability. Your Nightscape pictures will also see an improvement, thanks to this valuable addition on this mid-ranger. 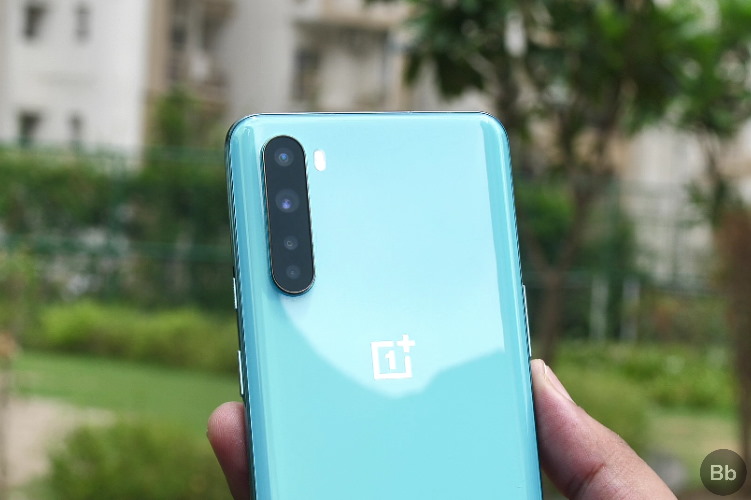 The primary sensor is paired with an 8MP ultra-wide camera with a 119-degree FOV, a 5MP depth sensor, and a 2MP macro camera. The latter seems to have only been added to bump up the camera count. Macro cameras can be fun but we have already seen that the 2MP macro camera aboard the OnePlus 8 is not the best-performing in the market. There’s a dual-LED flash sitting next to the vertical array.

As for the camera features, OnePlus Nord can capture videos up to 4K @ 30FPS, Super Slow-motion videos at up to 1080p @ 240FPS, Pro mode, RAW image capture, portrait (or bokeh) mode, and a lot more.

This is slightly smaller than the battery aboard the OnePlus 8. The 30W charging speed remains the same though. The company claims that you can charge the phone from 0% to 70% in around 30 minutes. It is, of course, juiced up via the USB Type-C port at the bottom. 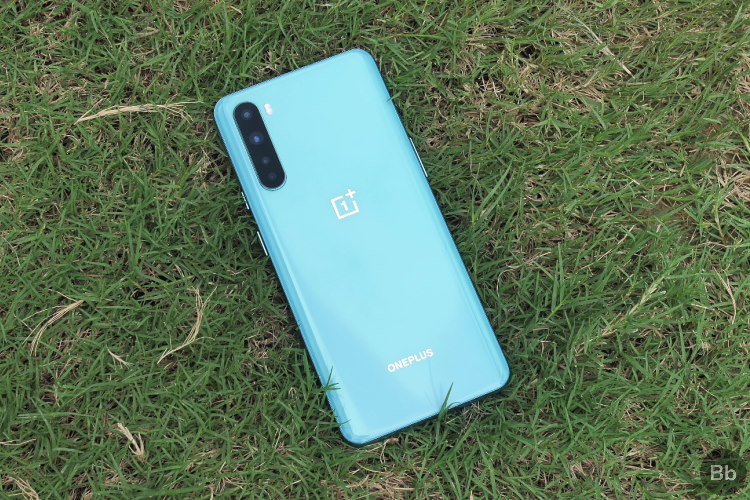 This is one of the areas where OnePlus has cut corners to keep the price low. OnePlus Nord doesn’t have an official IP rating. The co-founder Carl Pei, in an interview, revealed that you have rubber gaskets around ports and other precautions in place to help it survive in 30-meter water for 30 seconds.

This means Nord can easily handle spills and some light showers. We, however, won’t suggest you take this phone into the pool with you.

OnePlus Nord arrives in three configurations in India – 6GB+64GB, 8GB+128GB and 12GB+256GB. The price for all of the OnePlus Nord variants has been listed below:

The smartphone will be available in two color variants – Gray Onyx and Blue Marble. It will go on sale starting from August 4, exclusively on Amazon India, OnePlus.in and offline partner stores. The aforementioned sale date is for the 8GB and 12GB RAM variants, the 6GB variant will come later in September, as per the Amazon listing.