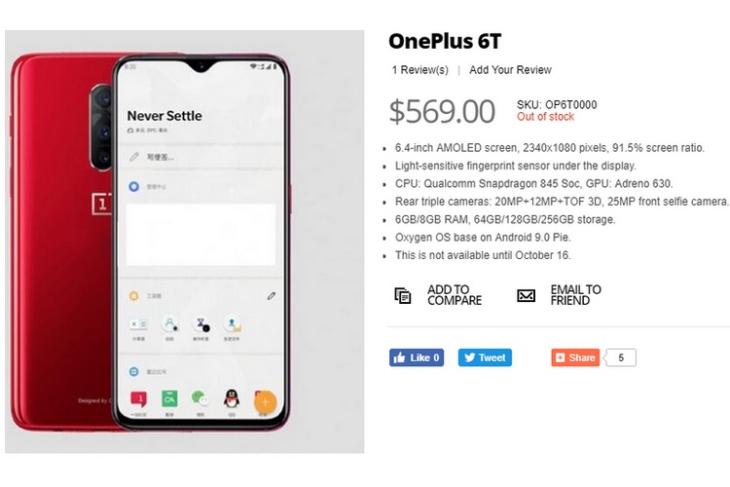 The rumor mill is abuzz with the impending launch of the OnePlus 6T, which is expected to be officially announced in October. While numerous renders and leaked images of a device claiming to be the OnePlus 6T have surfaced so far, we are yet to see a leak from a credible source. But that changes now, as the OnePlus 6T recently went up for pre-order with its complete specifications, images and price in tow.

The OnePlus 6T’s listing, which is still live on the Giztop website, states that the device is currently out of stock and will only be available after October 16th. The date mentioned on the website falls in line with previous leaks, which claimed that the next OnePlus offering will be unveiled in October. 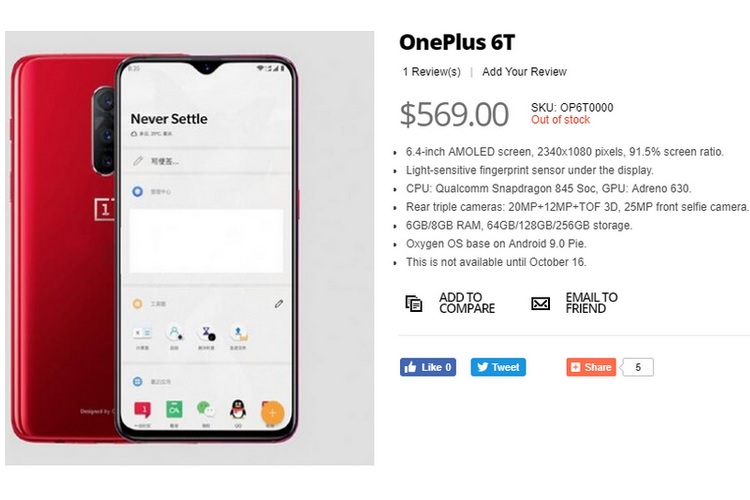 As for the pricing, the OnePlus 6T is listed at $569 on the Gizbot website, which again corroborates with previous reports which mentioned that the upcoming OnePlus smartphone might be announced somewhere in the ballpark of $550. The Giztop listing of the OnePlus 6T, which has already received the Eurasian Economic Commission (EEC) certification last month, also details the key specs of the upcoming device.

As per the listing, the OnePlus 6T will pack a 6.4-inch AMOLED display with a resolution of 2340×1080 pixels and an impressive 91.5% screen ratio. Under the hood, the device will come equipped with Qualcomm’s top-of-the-line Snapdragon 845 processor, paired with an Adreno 630 GPU, 6/8 gigs of RAM and up to 256GB of internal storage. In the imaging department, the OnePlus 6T will pack a triple rear camera set-up which consists of a 20MP, a 12MP and a ‘TOF 3D sensor’, while a 25MP sensor will be there to handle selfies.

The listing also reveals that the OnePlus 6T will boot Android 9 Pie out of the box, and will also have an in-display fingerprint sensor, something which has been officially confirmed by the company. The listing also contains two images of the device, but they are not official images by any means because we’ve seen them before in previous leaks and renders, and this is what raises some doubts about the credibility of the device’s listing on Giztop. Needless to say, do take this report with the proverbial pinch of salt, because apart from the specs, we’ve already witnessed eerily similar leaks and rumors surrounding the upcoming OnePlus smartphone.