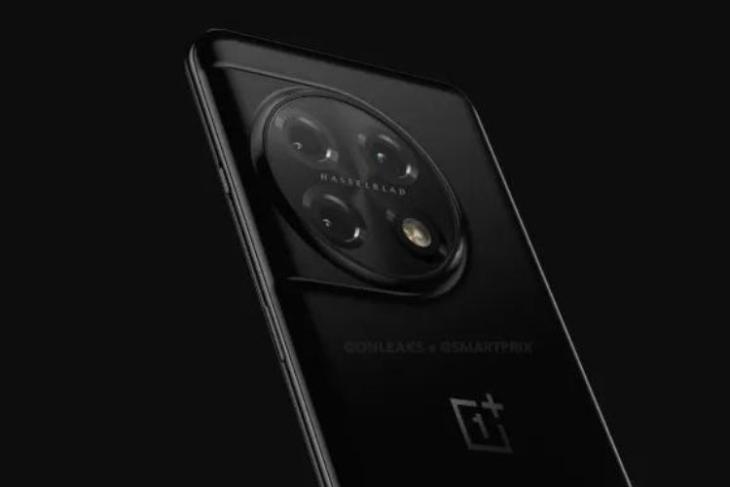 This Could Be the Final OnePlus 11 Design!

OnLeaks has collaborated with GadgetGang and showcased the ‘official’ image of the OnePlus 11. From the looks of it, the phone looks just like the OnePlus 11 Pro renders we saw earlier. Considering this new image is being termed official, this could be the final design of OnePlus’ 2023 flagship.

The smartphone is seen with a huge rear camera hump placed like a semi-circle. This appears like the amalgamation of the OnePlus 7T and the OnePlus 10 Pro design. It is suggested that the OnePlus 11 will be available in Forest Emerald and Volcanic Black colors, much like the 10 Pro. The bump has a glossy finish while the back panel seems to have a OnePlus 10 Pro-like finish.

We can also see the Hasselblad branding at the back and the possibility of the famous alert slider. There’s no image of the front but if we go by previous renders, it could have a corner-placed punch hole. You can check out the image below to see it for yourself.

It is also revealed that the OnePlus 11 is expected with a 6.7-inch QHD+ AMOLED display as leaked earlier. Support for a 120Hz refresh rate is highly expected. The phone will be powered by the latest Snapdragon 8 Gen 2 chipset, as confirmed by the company recently.

The OnePlus 11 is said to support up to 16GB of RAM and up to 512GB of storage. The rear cameras assortment could include a 50MP main snapper, a 48MP ultra-wide lens, and a 32MP telephoto lens, along with a 16MP selfie shooter. The device is also expected to get a 5,000mAh battery onboard with support for 100W fast charging. While this is faster than the OnePlus 10 Pro’s 80W charging, it is slower than the OnePlus 10T‘s 150W charging support. Expect OxygenOS 13 based on Android 13 too.

One thing to note here is that OnePlus is yet to reveal official details regarding the OnePlus 11 and given the expected ‘early 2023’ launch timeline, we can soon get to hear some details. So, stay tuned for further updates, and don’t forget to share your thoughts about the OnePlus 11 design in the comments below.