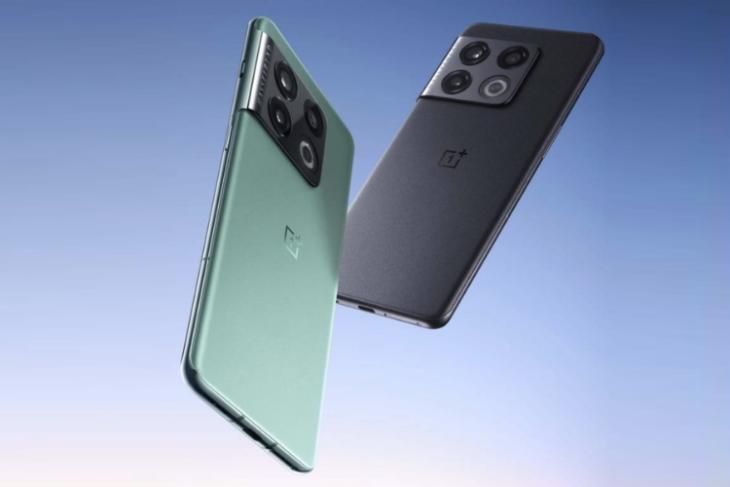 Tons of rumors and official details have finally led to the launch of the OnePlus 10 Pro in China, which is the company’s latest flagship and one of the first Snapdragon 8 Gen 1 phones available in the market. The OnePlus 10 Pro succeeds last year’s OnePlus 9 Pro and features an impressive set of design and hardware upgrades. Here’s a look at all of the new features and specs of OnePlus’ latest flagship.

Let’s start with the design. The new OnePlus 10 Pro, as revealed previously, moves away from the vertical rear camera bumps to include a huge square one that looks a lot like the one on the Galaxy S21 Ultra. The camera bump houses three cameras that have a 3D ceramic lens cover. The back panel sports the third-gen silk glass tech, which should help keep fingerprints and smudges away from your smartphone. Upfront, there’s a center-placed punch-hole screen.

The 6.7-inch QHD+ flexible curved screen is AMOLED in nature and supports “True LTPO 2.0” and a 120Hz refresh rate. The display also supports the AOD functionality, a peak brightness of 1300 nits, and a layer of Gorilla Glass Victus for protection against any accidental drops and scuffs. The phone also supports O-Haptics and X-axis linear motor.

As confirmed earlier, the OnePlus 10 Pro is powered by the latest Snapdragon 8 Gen 1 mobile platform from Qualcomm. It will take on the Xiaomi 12 series, the Realme GT 2 Pro, the Moto Edge X30, and other flagship smartphones in the market in 2022.

Coming to the cameras, OnePlus continues its partnership with Hasselblad, which started with the OnePlus 9 phones. The phone gets three rear cameras: a 48MP main camera with a custom Sony IMX789 sensor and support for OIS, a 50MP ultra-wide camera with support for a 150-degree field of view (much like GT 2 Pro) and default 110-degree FoV, and an 8MP telephoto lens with OIS and 3.3x optical zoom. The front camera stands at 32MP. There’s also a dual-color temperature LED flash baked into the square camera module on the rear.

The Hasselblad partnership leads to support for features such as 12-bit RAW photos with the help of the second-gen Hasselblad Pro mode. The phone gets improved natural color calibration (launched with the OnePlus 9 Pro), a Fisheye mode (same as the iQOO 9 and Realme GT 2 Pro), and the OnePlus Billion Color Solution for 10-bit color photography. It will also support 8K videos and 4K videos at 120fps, and the Movie mode to adjust the shutter speed, ISO, and more during or before video capturing and the LOG format for easy editing, better dynamic range, and more.

The OnePlus 10 Pro also includes a 5,000mAh battery with 80W wired Super Flash Charge (a first for OnePlus, and a departure from the Warp Charging days) and 50W wireless charging. It runs ColorOS 12.1 based on Android 12. The skin brings features such as self-smoothing engine 2.1, better fluency, free-floating window, cross-screen interconnection, smart sidebar, translation feature, and more.

The OnePlus 10 Pro comes in three RAM+storage configurations and will go on sale in China, starting January 13. Here are the prices:

OnePlus has also introduced the OnePlus Buds Pro Mithril Special Edition with a unique high-bright metal texture and smart dual device feature for easy pairing with a phone and a computer. You also have the ability to switch between the two devices with ease. Other features remain the same as the original OnePlus Buds Pro. The new version is priced at CNY 799 (around Rs 9,200) and will be up for grabs in China, starting today at CNY 699 (around Rs 8,100).

The company, however, hasn’t launched the vanilla OnePlus 10, and it remains to be seen that happens. Plus, there’s no word on when the new OnePlus 10 Pro will reach the Indian shores. We will keep you posted once we get details on this!