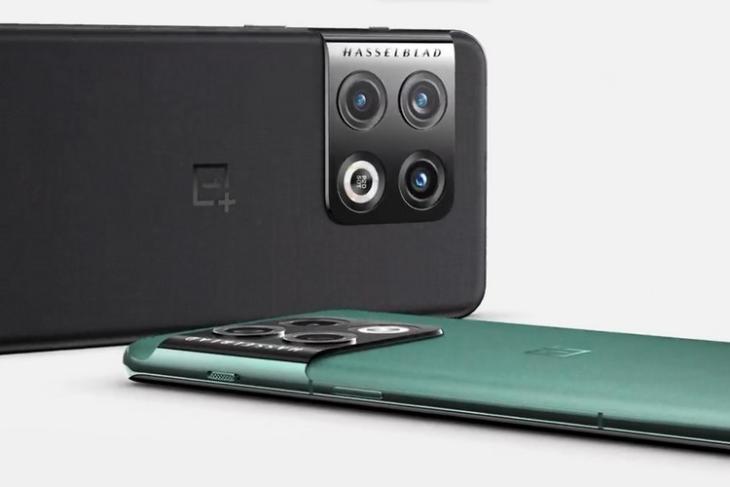 The image shows the OnePlus 10 Pro with a huge, square camera bump with rounded edges and the Hasselblad branding. Yes, OnePlus is retaining its partnership with Hasselblad, which started with last year’s OnePlus 9 series. Although it looks pretty different from previous OnePlus models, the camera design is pretty similar to Samsung Galaxy S21 Ultra‘s Contour Cut design.

It also shows a triple-camera setup and the OnePlus branding at the back. While the camera configuration is unknown, it is expected to include a primary 48MP camera, a 50MP ultra-wide lens, and an 8MP telephoto lens. Moreover, the device is rumored to feature pro-level zooming capabilities, with support for up to 3.3x optical zoom and up to 30x digital zoom.

OnePlus has also revealed the color variants of the OnePlus 10 Pro, following Lau’s tweet. A tweet reveals that the device will get two new colorways, namely Volcanic Black and Emerald Forest. The tweet also confirmed the presence of the Snapdragon 8 Gen 1 SoC inside, as revealed previously.

Moreover, rumors suggest that it could sport up to 12GB of RAM, up to 256GB of storage, a 4,500mAh battery with 80W fast charging, OxygenOS 12 based on Android 12, and more. The OnePlus 10 Pro is highly expected to launch on January 11 in China. It will be followed by a release in other markets, but a timeline has not been confirmed. However, if recent rumors are to be believed, OnePlus might launch the device in India sooner than expected.

So, how do you like the new design of the OnePlus 10 Pro? Let us know your thoughts in the comments below!