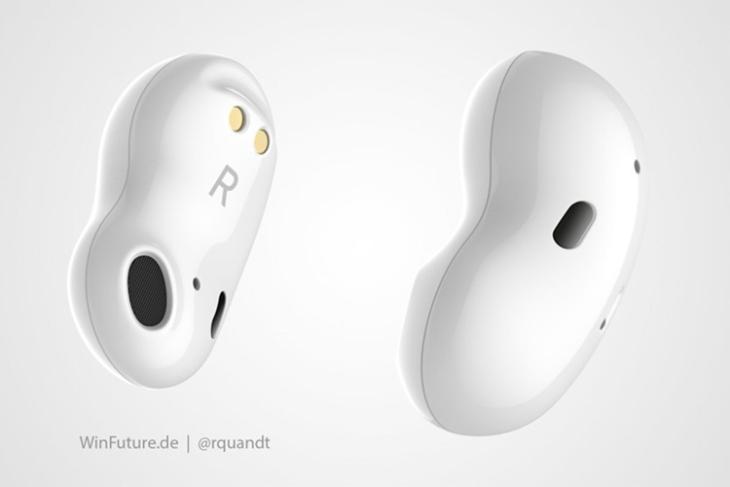 South Korean giant Samsung has so far already launched two pairs of truly wireless earbuds this year alone — the Galaxy Buds+ and the AKG N400 — and it’s only April. However, a new leak has already popped up showing what the next iteration of the company’s Galaxy Buds could look like and believe me, if you were complaining that the Buds+ didn’t look any different from the Buds, well, these new ones will probably shut you up.

According to a report from Winfuture and Roland Quandt, the next generation of Galaxy Buds are codenamed ‘Beans’ which is extremely apt based on the 3D renders shared by Roland Quandt on Twitter.

Pics/renders based on actual 3D design data used to make them. These launch in a few months. In Evaluation phase right now, so design could still change. https://t.co/UIk6KaYHBh

According to Quandt, the renders have been made using actual 3D design data, and even though all the usual warnings about taking this information with a pinch of salt obviously apply here as well, let’s just stop and look at these for a moment.

“These look like kidney beans” seems to be the general consensus among tech journalists around the world, and I’m not sure if that’s a good thing or not. On the plus side, they will not protrude outside the ear, which looks a little odd. However, the renders also don’t show any silicone earbuds, which probably means no ANC either, and that would be a crucial feature to miss out on.

If the report is to be believed, Samsung is currently in the Engineering Validation Test phase for this design, which means these are far from finished. However, the report also says that they should launch this year, in a few months. I took that to mean that they will be launched alongside the Note 20. We’ll just have to wait and see.

A new report out of South Korea (via Sammobile) suggests that the upcoming ‘Galaxy Bean’ will have Active Noise Cancelation.

That seems a bit of a technical challenge to achieve without silicone eartips offering the sort of seal required for effective ANC, but here’s hoping Samsung has figured something out. Or maybe these will use AirPods Pro-like silicone tips? No idea.

The report also claims, rather surprisingly, that the earphones will be priced under $150.

Now that excites me. Going by Samsung’s track record with TWS earphones, the upcoming ‘Beans’ will sound great. Plus they are expected to have ANC. And if they are priced under $150, they will likely be a steal.

You Will Love the Galaxy Buds, Until You Hate Them