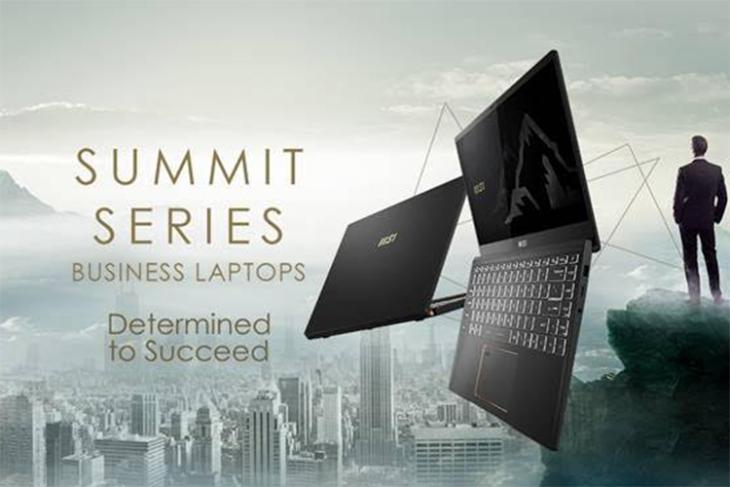 MSI is well known for making some of the best gaming laptops in the market. However, the company has never really been known for making business devices. That changes today as MSI has officially entered the business laptop market with its new Summit series of Intel powered laptops, and a whole new logo.

MSI’s latest offerings come with the new 11th-gen Tiger Lake chipsets from Intel, packed in designs that will not just fit in an office space, but also look really impressive. MSI claims the Summit series’ design is one of minimalism and modernism. Plus, the laptops come with advanced security features which are a need of the hour for business devices.

The company unveiled a total of four new Summit laptops, two in the E-series and two in the B-series.

The MSI Summit E15 comes with a 15.6-inch display. This is available in either a Full HD touchscreen configuration, or a 4K panel with 100% Adobe RGB coverage. Under the hood, the laptop comes with the 11th-gen Intel Core i7 processor. This is paired with up to 64GB RAM, and plenty of storage options. There’s also a GTX 1650Ti in tow for GPU intensive tasks.

You also get plenty of ports, including Thunderbolt 4, HDMI, microSD card reader, and more.

The Summit E14 on the other hand comes with 14-inch screen. You still get the choice between a Full HD touchscreen or a 4K panel here with 100% Adobe RGB coverage. Under the hood, you will find the Tiger Lake Core i7 processor paired with up to 32GB RAM and an NVMe SSD. The E14 also comes with a GTX 1650Ti, so it’s essentially just as powerful as the E15, except for the RAM configuration.

For I/O, you get Thunderbolt 4, USB Type A, microSD card reader, and a headphone/mic combo jack.

The Summit B15 is another 15-inch laptop, but it doesn’t offer a 4K display. You’ll get a standard Full HD non-touch display on the B15. The laptop does get the latest 11th-gen Intel Core i7 processor. However, instead of a dedicated GPU, you get Intel Iris Xe graphics on board. Apart from that, you get up to 64GB RAM, and plenty of storage options.

The port situation is good as well, with almost all the important ones covered. You get Thunderbolt 4, HDMI, USB Type-A, and a headphone/mic combo jack.

MSI hasn’t announced the prices or availability for the new Summit series of laptops. However, we should be getting those details soon.