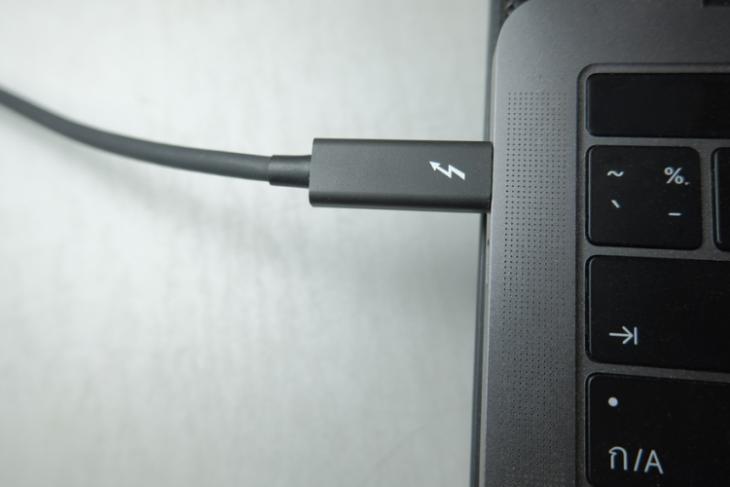 Intel first revealed Thunderbolt 4 during its CES 2020 presentation earlier this year. The company didn’t share any major details for Thunderbolt 4 at the event. But today, it has officially revealed everything there is to know about this next-gen port that will come baked into most laptops in the following years.

First, let’s answer the most important question of all – what’s new in Thunderbolt 4? How is it different from Thunderbolt 3? Are we going to see insane speed boosts?

As has been rumored for the past six months, Thunderbolt 4 is essentially the same as Thunderbolt 3 but with some minor improvements sprinkled on top. First up, there’s no speed boost. Intel already revealed this back at CES 2020, saying that Thunderbolt 4 is four times faster than the current USB standard, i.e USB 3.2 Gen 2.

The USB 3.2 Gen 2 port operates at a maximum speed of 10Gbps. This means the new Thunderbolt 4 ports will offer a maximum throughput of 40 Gbps, which is the same as the previous-gen thunderbolt 3. Intel states that Thunderbolt 4 is built upon the Thunderbolt 3 standard, thus, it’s not a major upgrade.

In addition, Intel has doubled the minimum video and data requirements with this new port. It now supports up to two 4K displays or a single 8K display. The port supports the same protocols, including USB 2.0, USB 3.2, USB 4, DisplayPort, and PCIe (PCI Express), like its predecessor. It also requires a minimum data transfer rate of 32Gbps via PCIe and 3,000Mbps for storage transfer speeds.

The chipmaker is now trying to boost the adoption of Thunderbolt 4 ports by laying down some certification requirements. This includes PC charging on at least one of these ports, wake up the computer simply by touching the mouse/ keyboard when you’re connected to a dock, and Intel VT-d (virtualization technology) based DMA protection is required.

As for the accessory side of things, “Thunderbolt 4 will offer docks with up to four Thunderbolt ports and universal cables up to 2 meters in length.” This will include one upstream and three downstream ports and the 40Gbps bandwidth will be split among connected accessories using the new Thunderbolt 4 controller 8000 series.

When will we see Thunderbolt 4 port baked into devices? The press release says that Thunderbolt 4 laptops and accessories will make their debut later this year. Intel will first introduce it with the upcoming 10nm ‘Tiger Lake’ mobile processors. The devkits and certification testing for Thunderbolt 4 are now available.