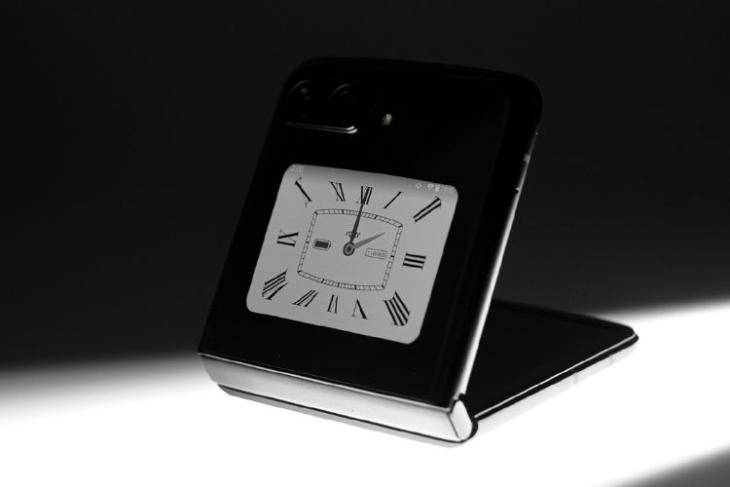 Motorola was supposed to launch the new Moto Razr 2022 foldable and the Moto X30 Pro flagship phones on August 2 but that got canceled at the last moment. Turns out, we have a new launch date, as suggested by a new teaser. Check the details below.

Lenovo and Motorola’s General Manager Chen Jin recently posted a new teaser on Weibo, showcasing the half-folded Moto Razr 2022. Apart from giving us yet another view of its upcoming foldable phone, there’s a hint at the launch date and time too.

The clock on the secondary display mentions August 11 and 2 pm, which is when you can expect the new Razr and even the Moto X30 Pro to arrive. If this is the official date, then the new Motorola flagships will be announced next Thursday. Although, we still need proper confirmation on this.

The teaser image also shows a bigger outer display and a pill-shaped camera hump, much like the Galaxy Z Flip 3 and even the upcoming Galaxy Z Flip 4.

To recall, the previous launch event, which was scheduled for August 2 was canceled due to the current China-Taiwan issue. This is also the reason why the OnePlus Ace Pro (OnePlus 10T for the global markets) got canceled too. However, it did launch in India and other regions. It remains to be seen when the OnePlus flagship phone will be out.

Coming back to the new Motorola phones, the Moto Razr 2022 will boast a clamshell design with possible display and hinge improvements. The foldable phone will fall in the high-end segment and come with the latest Snapdragon 8+ Gen 1 chipset. Camera improvements and more changes are in tow too.

As for the Moto X30 Pro, this is also expected to be powered by the Snapdragon 8+ Gen 1 chipset and come with a 200MP camera, which will be a first for the company and even the tech world. Possible support for 120W fast charging, a 120Hz display, and more features are also expected.

All these details will be confirmed once Motorola finally launches the Moto Razr 2022 and the Moto X30 Pro and we expect this to happen really soon. We will keep you posted on this. So, keep on visiting Beebom.com for further information.