A few weeks back, we published an exclusive news informing our readers that the Xiaomi Mi 8 SE will be coming to India, albeit with a new name, the Mi 8i. While Indian consumers have to wait a few more weeks before they can get their hands on the device, we had the privilege of flying to China and acquiring the device for ourselves. Now that we have had some time to play with the device, we wanted to share our experience with you. So, if you are interested in the new Xiaomi Mi 8 SE and are eagerly waiting for it, here are the 12 best Mi 8 SE features and tricks that will make you want it even more:

It seems that for smartphones, 2018 is the year of gestures, notches, and face unlock, and Xiaomi Mi 8 SE is bringing them all. Let’s start with gestures as the gestures on the Mi 8 SE is one of the best I have ever used on any Android smartphone. While Xiaomi will give you an option to use either gestures or buttons when you are setting up the device for the first time, you can change it later by going into the Settings. If you want to enable gestures in your Mi 8 SE, go to Settings -> Full screen display and tap on the “Full screen gestures” option. 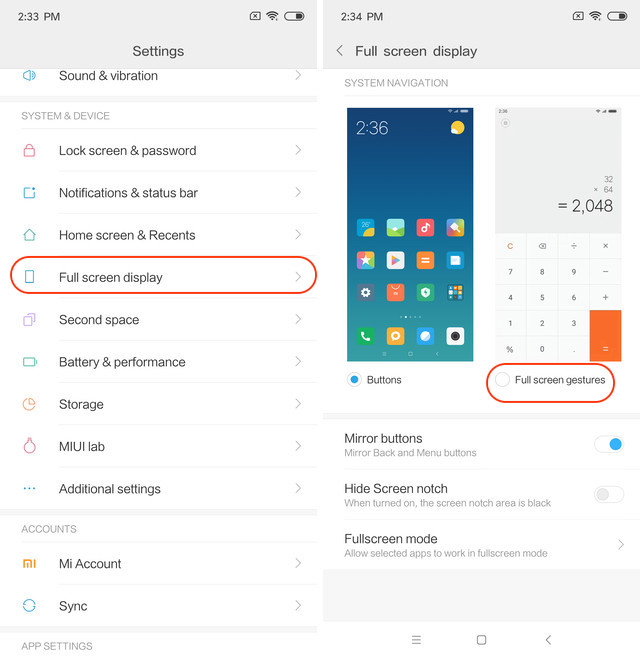 As soon as you do that, your phone will give you an option to learn gestures. If you have never used gestures before, I would recommend that you tap on the “Learn” button to get familiar with it. Anyways, the gestures are pretty simple to get used to. You can swipe from the bottom to go home, swipe from the bottom and stop in the middle to go to Recents menu, and swipe from the left or right edge of the screen to go back. You can also swipe and hold from the left or right edge to go back to the previous app instead of going back a page on the same app, which is really nice. The best part about using gestures on Mi 8 SE is that it feels fluid and works every time. If you love gestures, you are going to love the Mi 8 SE. 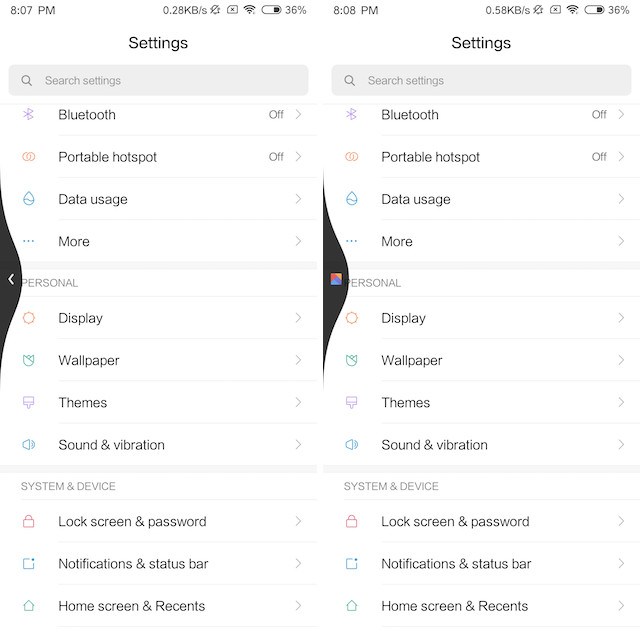 As mentioned above, the Mi 8 SE is also bringing face unlocking feature and while it might not have the infrared sensor present on the normal Mi 8, it works every time. To setup face unlock on your Mi 8 SE, open the Settings app and then tap on “Lock screen & password” option. Here, tap on “Add face data” to add your face data for the unlocking purposes. 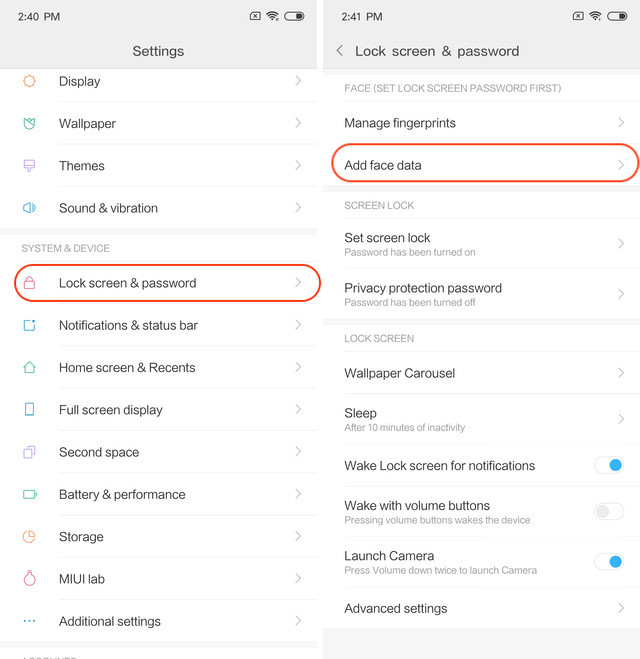 While adding your face data, just position your face so that it falls inside the circle and your face data will be added. Next time you want to unlock your smartphone, just raise it and allow it to look at your face. The face unlock is fast and works every time. However, do remember that it’s not as secure as your fingerprint scanner and hence cannot be used for things like payment authentication. 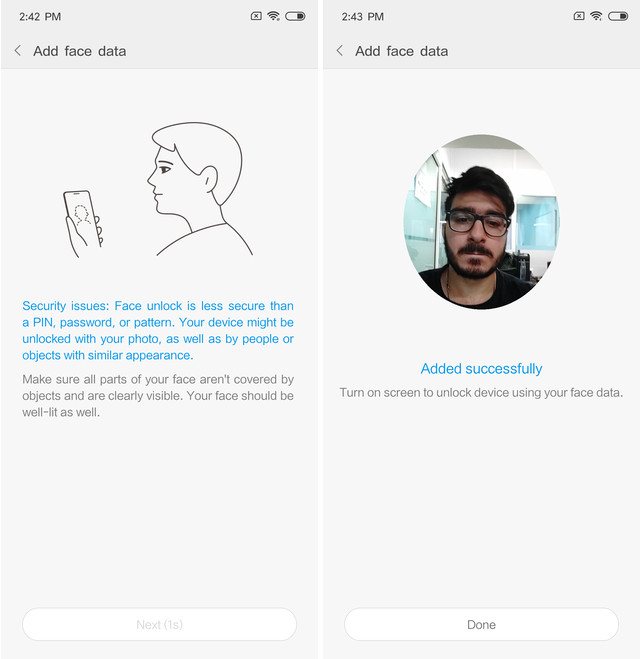 Now that we have talked about the gestures and the face unlock, let’s talk about the notch. Yes, it’s there, and yes it looks ugly as hell. However, give it a few days and you will get used to it and won’t mind it much. That said, if you are someone who cannot live with the notch no matter what, the Mi 8 SE gives you an option to hide it. To hide the notch, go to Settings -> Full screen display and enable the “Hide Screen notch” option. 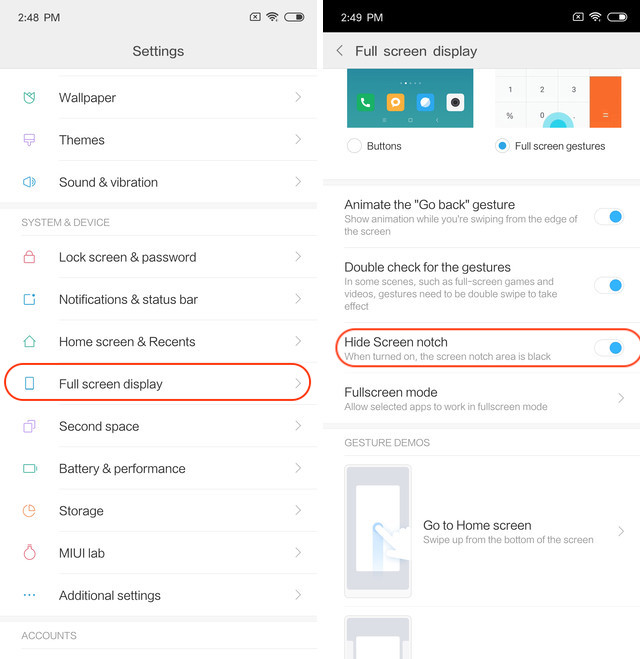 One of my favorite feature coming with the Mi 8 SE is the “Always on mode” which allows you to always show time, date, and messages on the lock screen when it’s off. I used to love this feature on my old Motorola phones and I am happy that it’s here. It looks even better on the Mi 8 SE as it packs a Super AMOLED panel which means that the phone only has to light up the pixels that it needs to.  If you also love Always on mode, you can enable it by going to Settings -> Display -> Always on mode, and then flicking the icon to enable it. 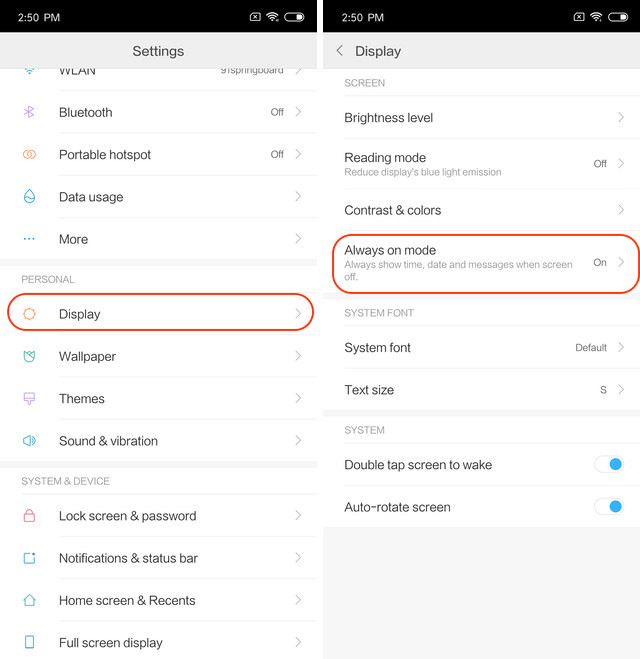 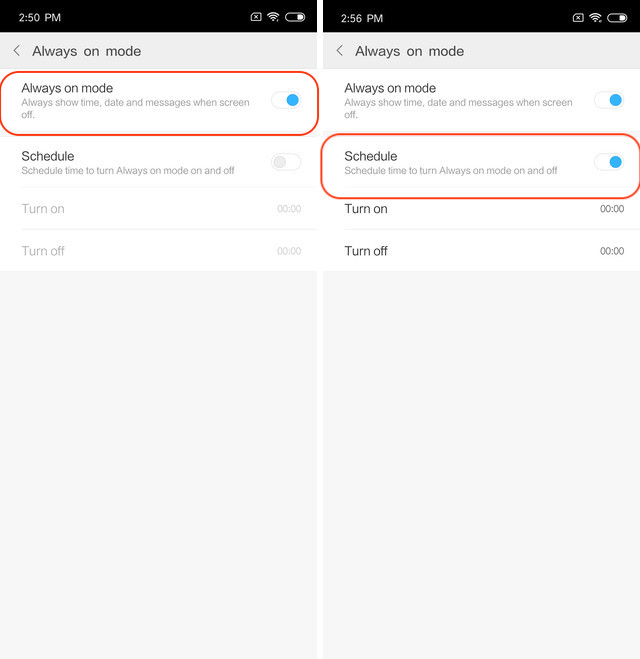 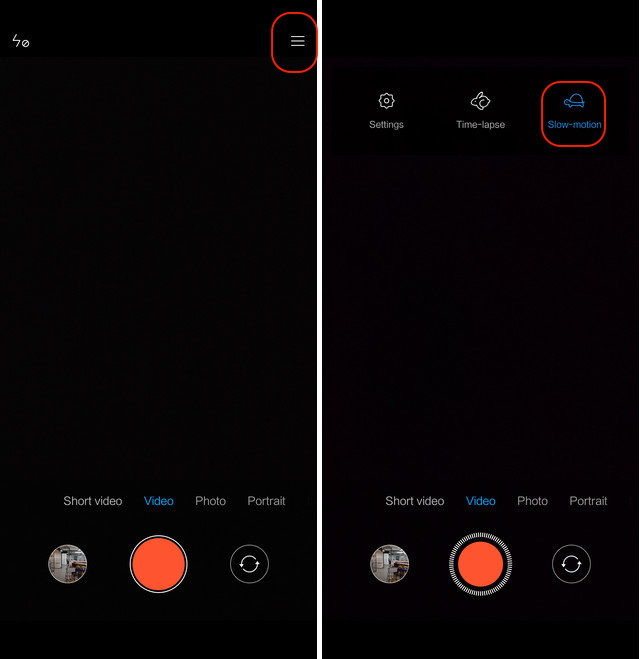 When the icon turns blue, it means that you can now record videos in slow-motion. To setup up the recording preferences, inside the same hamburger menu, tap on Settings -> Video HFR and then select your preference. You have three options to choose from, which are 720p at 120 fps, 1080p at 120 fps, and 720p at 240 fps. Higher the fps the better will be the slow-motion effect. However, do not that the at higher fps, the recording will be of lower quality as it only supports 720p recording at 240 fps. So, choose your record settings to match your needs. 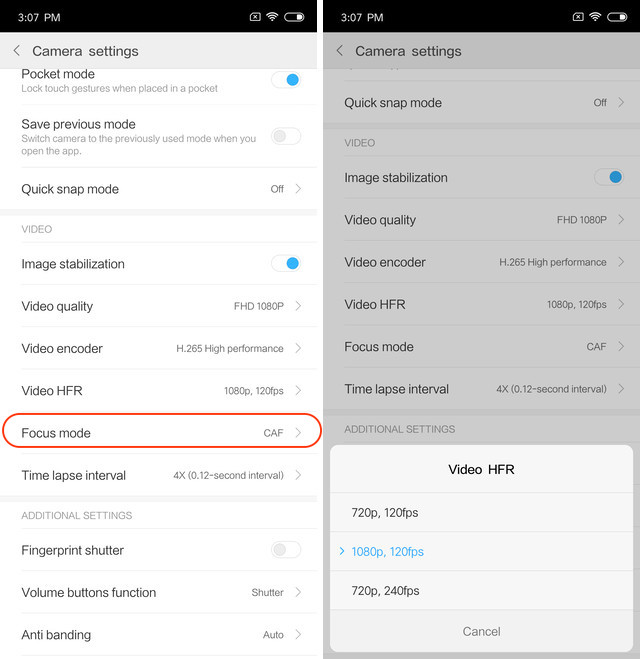 Another great camera feature coming with the Mi 8 SE is the AI-powered portrait shots. Basically, the camera uses artificial intelligence to give you bokeh effect in shots. To use portrait shots capability, just launch the camera app and swipe right to left on the camera viewfinder to go into portrait mode. 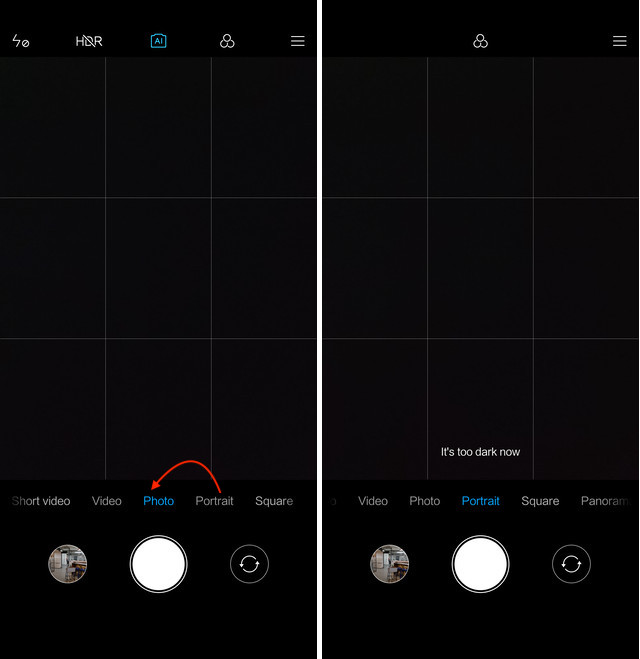 Now, just point the phone at the subject and click the picture to take pictures with bokeh mode effect. If you want, you can also tap on the filter icon (marked in the picture below) to take apply filters even before you take the picture. 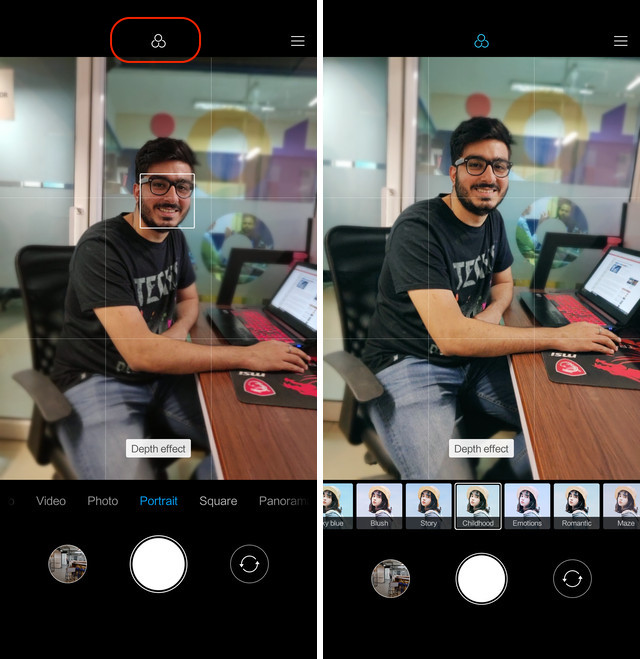 One novel feature coming with the Mi 8 SE is the new “AI Scene Detection” which utilizes artificial intelligence along with your phone’s camera to identify the things around you. It seems that this feature is still in beta as it doesn’t work a 100% of the times, however, I am pretty sure that it will work once the phone is officially released in India. 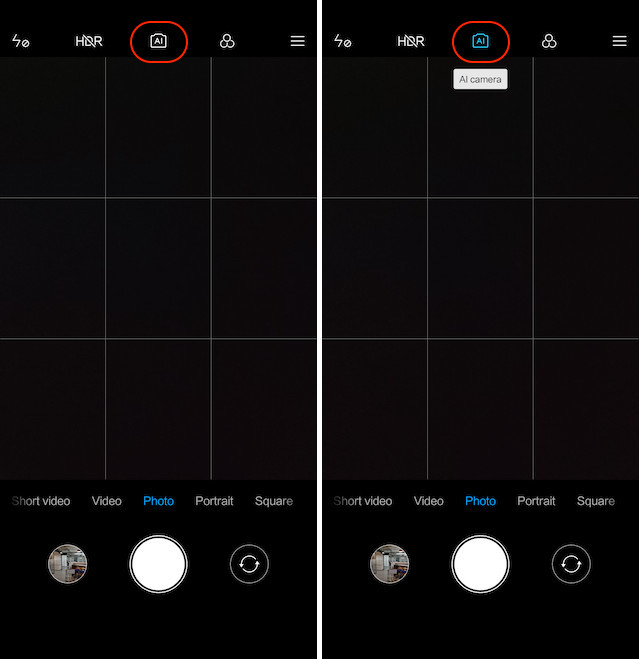 To use the AI Scene Detection feature, launch the camera app and then tap on the AI button at the top. Once you tap on it, it will turn blue to show that it’s working. Now, just point your camera at a scene and it will detect it and automatically apply the effects to give you the best possible photos. For example, in the picture below, you can see the leaf icon which shows that the phone identified that a plant is in focus. 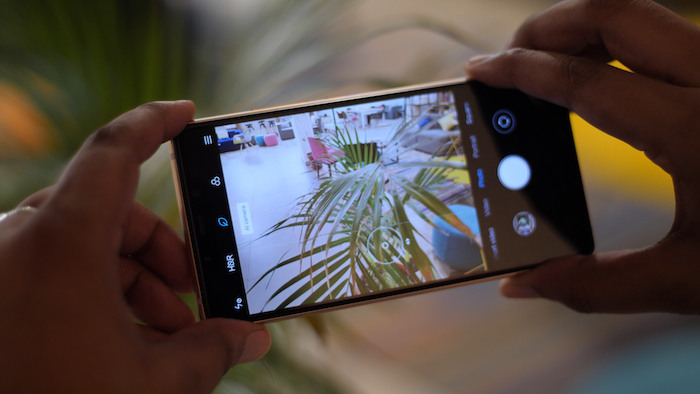 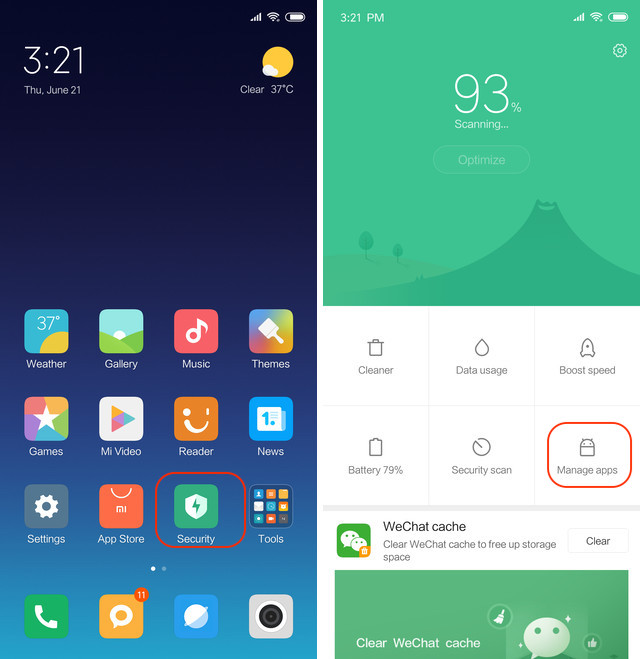 Here, as you can see, you have four different tabs. The first is the “Updates” tab where you will find the pending updates of all the apps in a single place. The “Uninstall” tab allows you to delete multiple apps at a time while the “Dual apps” tab allows you to create a clone of your apps. Finally, the “Permissions” tab is where you manage the permissions given to the apps. Since I personally install a ton of apps for testing, the Uninstall tab is a boon for me. This is a very cool feature and I know that you guys are going to love it. 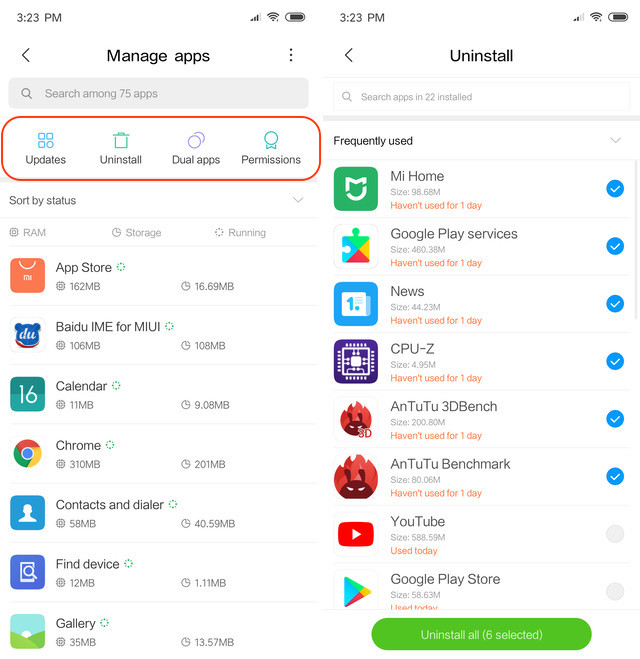 Since the Mi 8 SE will be running on the MIUI 10 when it launches in India, a few things have changed which we will need to get used to. For example, now locking an app in the Recents menu and accessing the app-specific information is a little different than how it was before. Now, to access these features, first, you have to access the Recents Menu and then tap and hold on a card. 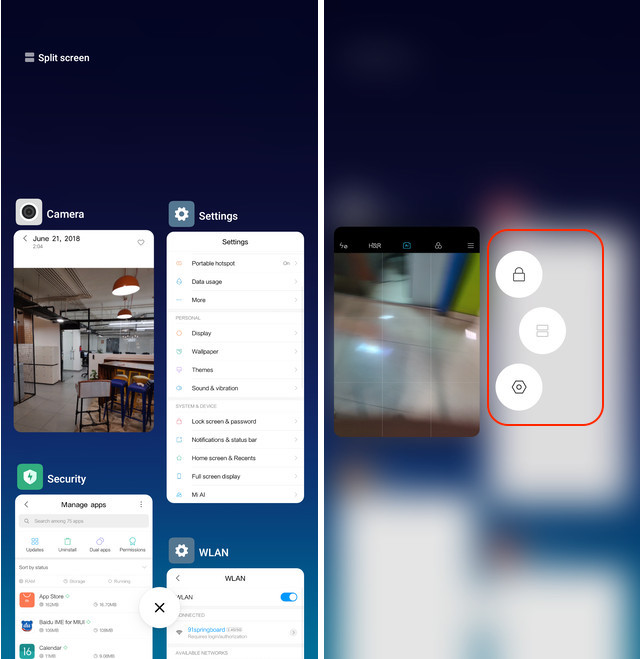 As you can see in the picture above there are three different options. The first one helps you lock apps so that even if you clear the recent apps, it won’t get clear. The second option lets you go into split-screen mode while the last one opens the app info page. Tap on the three options to explore it for yourself. 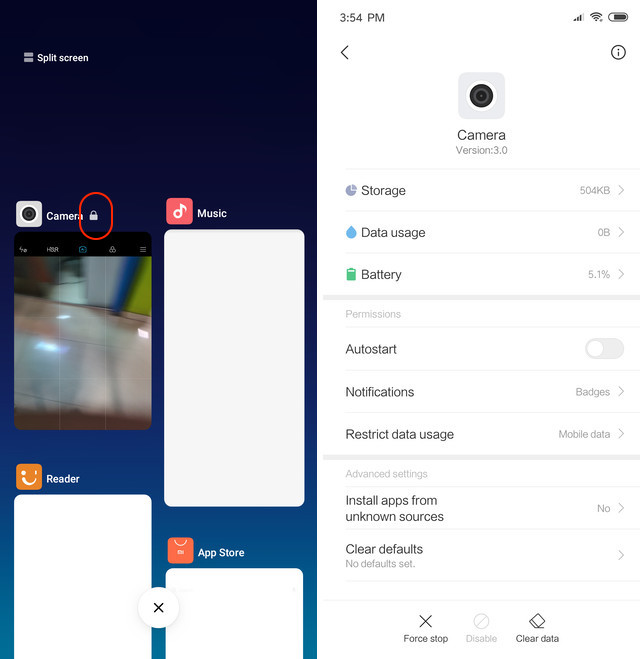 With MIUI 10, Xiaomi finally introduced the “Picture-in-Picture” mode feature and it’s coming to the Mi 8 SE. The Mi 8 SE users will be able to enjoy this awesome feature for the apps that support it. My favorite use of the picture-in-picture mode is while navigating as it allows me to quickly access other apps without quitting the navigation. To use PIP mode, when you are navigating, just hit the home button and the Google Maps will automatically start the PIP mode. 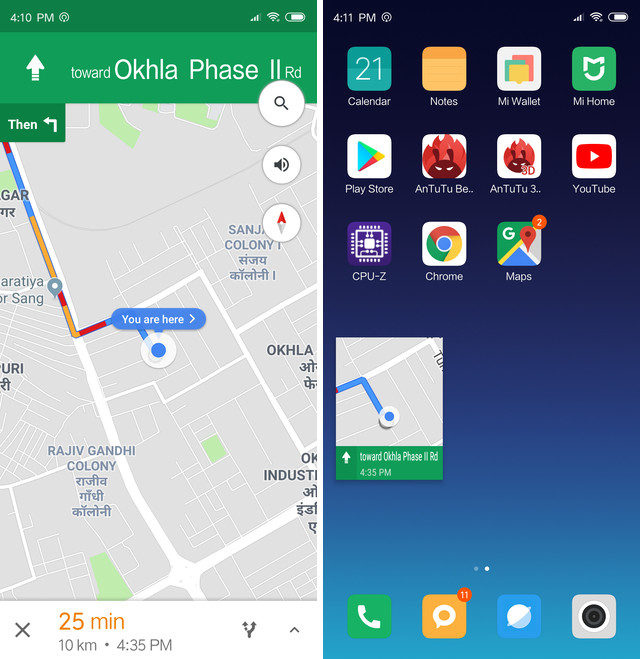 11. Set-up Do Not Disturb Countdown

If you use “Do Not Disturb” or DND mode on your smartphone you know that the biggest disadvantage of using this mode is that when we forget to turn it off, we miss out on all the important notifications. Xiaomi has tried to solve this problem by allowing users to set-up a DND countdown timer. Once the timer has run it course, the DND mode automatically disengages. This is a very handy feature for users who like to use DND mode on their phones without the fear of forgetting to turn it off. 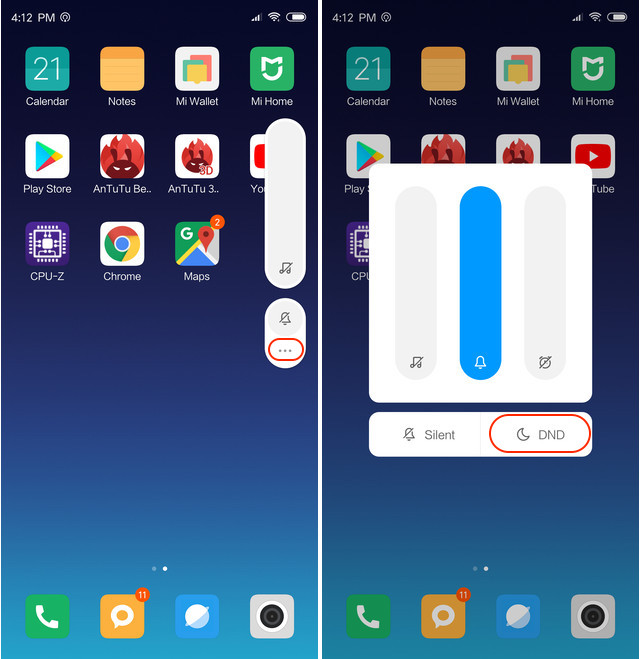 To set up a DND countdown, first, tap on the volume key to open the new volume menu. Here, tap on the 3-dot option. Now, tap on the DND button to activate the DND mode. When you activate the DND mode, you will find a new slider at the bottom. You can slide the slider from left to right to set the duration of DND mode. The slider can be set anywhere between 0 minutes to 8 hours which should be more than enough for everyone. I am certainly enjoying this feature and can see it being used by numerous users. 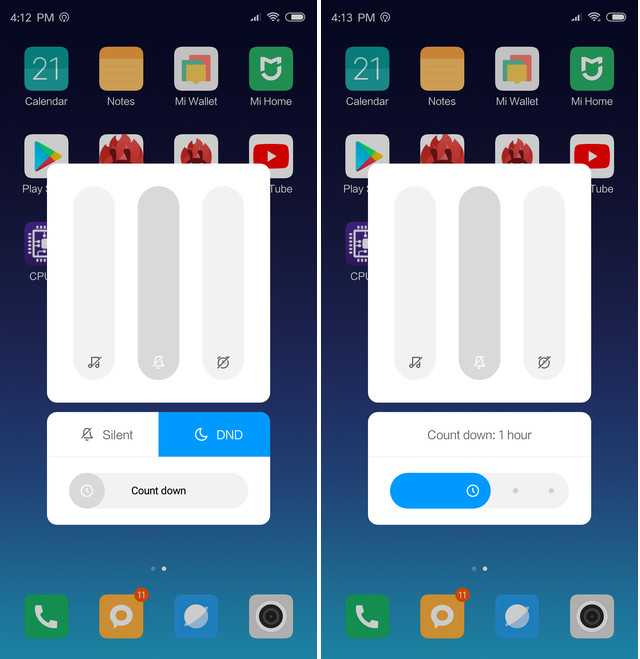 The last Mi 8 SE feature that I am going to share with you guys will not only make your life easier but also more secure. The “Auto-Fill in Apps” feature allows the phone to directly input your saved password in apps without making you type it. The feature is really easy to set-up and here is how you can do it. 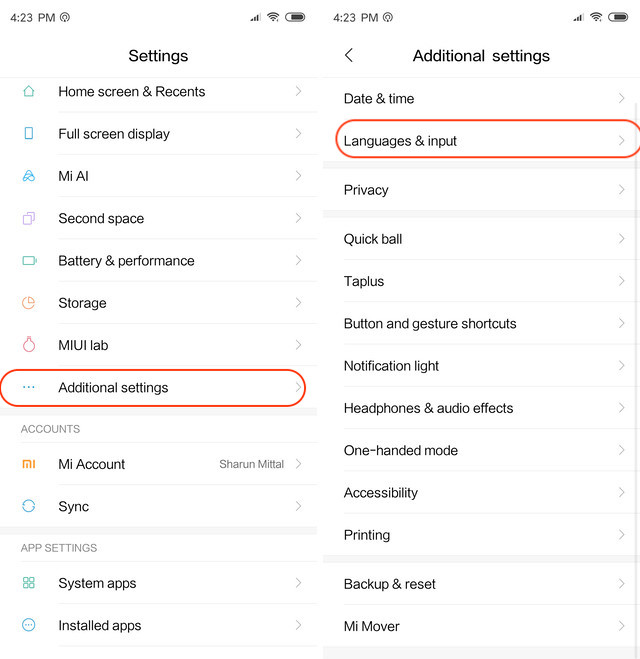 To set-up auto-fill in apps go to Settings -> Additional settings -> Languages & Input -> Autofill service. Here, select Google or tap on “Add service” option to add any other third-party password manager service that you might be using (example: LastPass). That’s it, now when you open an app, you will see the option to autofill login ID and password. 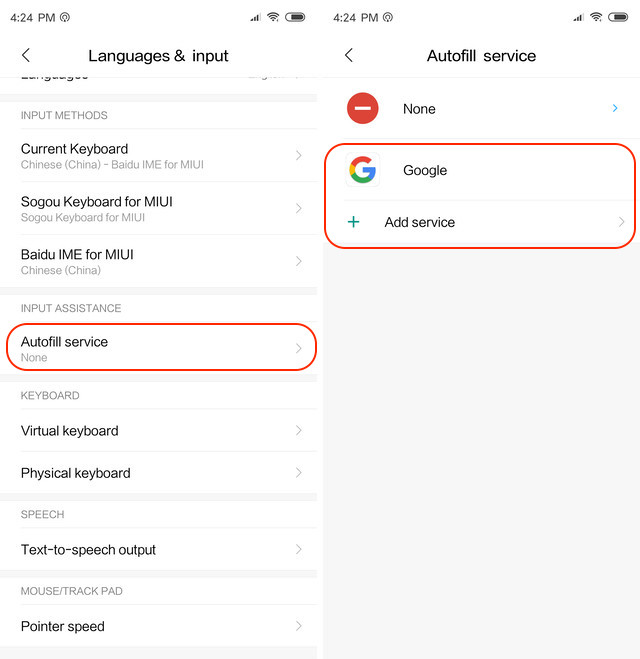 That ends our list of the best features and tips for your Mi 8 SE. There’s a lot to like here and I am certainly enjoying these features on my Mi 8 SE. Do check out the list and let us know which is your favorite feature by writing in the comments section below. Also, let us know how much you are excited about the new Mi 8 SE.