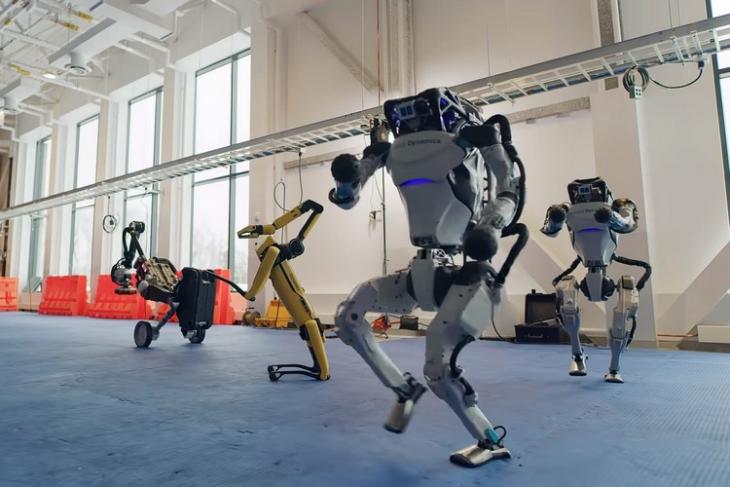 They can mash potato, they can do the twist, they can dance better than most humans (at least better than me!), and they are robots! Well, if you are into robotics, then you’d know that I am talking about Boston Dynamics’ recent new year video in which all of its military-grade robots showed off some crazy moves to a #1 hit from the 1960s.

The US-based advanced robotics company, Boston Dynamics is a company that has been working on consumer-focused robots for quite some time now. If you do not know about the company’s popular four-legged robot-dog, Spot by now, then you, my friend, are living under a rock.

Now, Spot is not the only robot-model the company developed, although it is the only one that has been commercially available and was seen helping frontline workers during the peak of the 2020 pandemic, solving cases with the NYPD, and helping researchers map the Chernobyl powerplant. However, the company has some pretty advanced robots in its inventory that can, well, dance really well, including Spot.

So, to lift our spirits and to help us walk into the new year with some positivity, Boston Dynamics recently released an adorable (and a little creepy) video showcasing all of its robots dancing to The Contours’ “Do You Love Me?”

It starts with a couple of the company’s human-like Atlas robots grooving to the song, and Spot joins them shortly for an amazing show. There’s also a special appearance by Handle, Boston Dynamics’ advanced robotic arm that, honestly, looks like an Ostrich-on-wheels!

In the very well-choreographed performance, all the robots showed some crisp moves and a ton of agility which made their dancing look as real as a human dancer’s. At one point, Spot even lip-syncs the lyrics of the song to take the performance to a whole new level. You can check out the 3-minute video right here:

Now, it is really crazy to see lifeless machines made for military purposes dance and groove like this. But hey, 2020 has already taken away my ability to get surprised by now. So yeah, I would not be surprised if these cute-yet-creepy robots become terminator bots and lead a rebellion against humans in the coming days. Happy New Year!