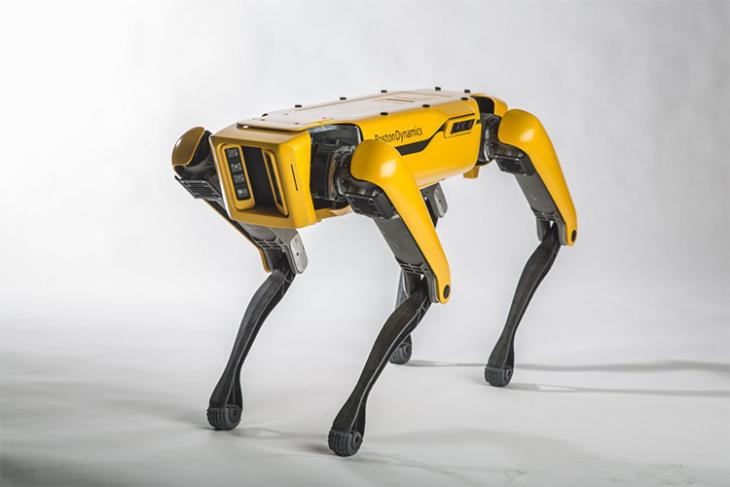 Sometimes you just don’t want to know what the future may look like, especially when it may come sooner than you think.

After demonstrating the Atlas robot last year, US-based robotics company Boston Dynamics is back at it again, but this time the result is a lot less cute than a humanoid performing backflips quite masterfully.

Its new robot, called SpotMini, is a small quadruped robot which has a neat trick up its sleeve – it two different designs and one of them has a rotating arm that can open doors easily. Yes, robot dogs that can open doors are here and if that reminds you of Black Mirror’s Metalhead, you are not alone.

The battery powered robot dogs weighs 30 kg and are capable of carrying 14 kg payload, in addition to door-opening limbs. It’s 0.84m in height and makes use of a 3D vision system to navigate around its surroundings. To facilitate movement, the SpotMini features 17 joints which are powered by electric actuators. Boston Dynamics claims that the SpotMini can go for about 90 minutes on a single charge, but the battery life depends on the actions it performs.

The SpotMini is the quietest robot to come out of Boston Dynamic’s stables and inherits all of the mobility features from the full-sized Spot robot. The arm on the SpotMini can be used to pick up and handle objects using its 5 degree-of-freedom. In terms of visual sensors, the SpotMini includes stereo cameras, depth cameras, an IMU, and position/force sensors in the limbs. All the sensors combined help the robot with navigation and mobile manipulation.

Well, now I know the backstory to that killer Robo Dog apocalypse episode of #BlackMirror.

In itself, the development means these robots could one day be used in conventional manufacturing units, but those with fears of robots taking over the world now know that simply closing the door won’t keep them out.