Skip to content
Home What is Impact of 5G Radiation: Is 5G Bad for Your Health?

5G cellular networks are already up and running in many regions around the world, including the US, Europe, China, Japan, South Korea, etc. We expect 5G to roll out in India by late 2021, although widespread availability might take several years. The 5G technology will revolutionize internet data with high speeds and low latency. However, many are worried about increased radiation from 5G network infrastructure and how that might affect their health negatively. And we are going to discuss just that today. Is 5G bad for your health? Is 5G causing the COVID-19 case surge? We will answer all of these questions.

Impact of 5G Radiation on Humans and Animals

In this article, we will talk about the radiation risks from 5G networks and whether it is bad for people, animals, and the environment at large. We believe such an explainer is necessary because of the persistent rumors, misinformation campaigns, and various conspiracy theories against 5G networks.

Following rumors of 5G radiation being the source of Novel Coronavirus (SARS-CoV-2), people set fire to 5G cell towers in the UK last year in an attempt to curb the virus spread. And now, misleading messages online claim that 5G mobile towers testing is the cause of the gruesome second wave of COVID-19 cases in India. Well, let’s find out if that’s true or not.

What is 5G Technology?

5G refers to the 5th-generation of wireless mobile networking technology and marks a big leap over 4G LTE. While the initial rollout of 5G networks started in 2019, it is still restricted to a handful of countries around the world.

With high capacity and ultra-low latency, 5G will give artificial intelligence (AI) and IoT applications a major boost across many different industries and use cases. It will lead to the birth of new IoT applications, including telesurgery, remote surveillance, cashier-less stores, inventory tracking, livestock management, driver-less cars, and more. You can read in detail about 5G technology and how it compares to 4G in our detailed explainer article. 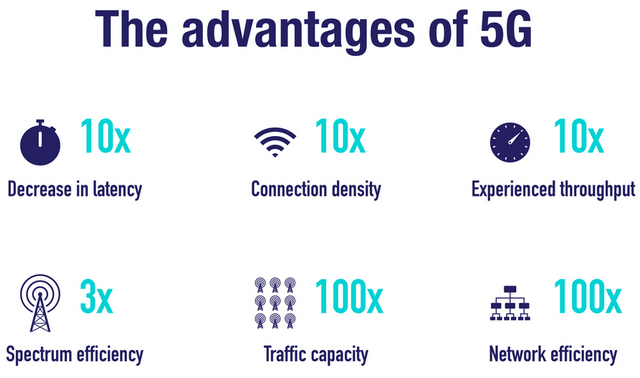 According to the World Health Organization (WHO), the exposure from 5G network infrastructures at around 3.5 GHz is similar to that from 4G base stations. However, with the use of multiple beams from 5G antennas, exposure could increase based on the users’ location and their mobile usage.

Another cause for concern is that 5G will employ millimeter waves for the first time in addition to microwaves that have been in use thus far. However, given that 5G technology is currently at an early stage of deployment, the extent of any change in exposure to radio-frequency fields is still under investigation.

According to the WHO, tissue heating is the primary mechanism of interaction of radio-frequency fields with the human body. Currently, the organization is conducting a health risk assessment from exposure to radio frequencies, covering the entire radio-frequency range, including 5G. WHO will publish its whitepaper by 2022, and it will likely include the scientific evidence related to potential health risks from 5G exposure as telcos worldwide deploy the network technology and as more public health-related data becomes available. 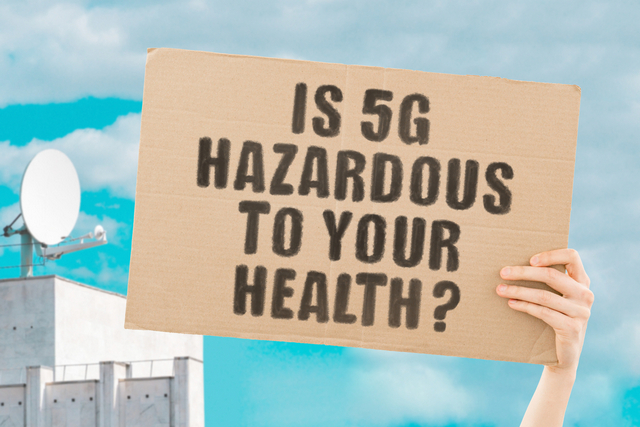 In the meantime, critics cite more than 500 studies that allegedly found harmful health effects from exposure to radio-frequencies even at low intensities that do not cause significant tissue heating. Citing this research, over 240 scientists, who have published peer-reviewed research on biological effects of non-ionizing electromagnetic fields (EMF), signed the International EMF Scientist Appeal, which calls for more stringent caps on 5G radiation exposure limits.

According to the researchers, “Numerous recent scientific publications have shown that EMF affects living organisms at levels well below most international and national guidelines. Effects include increased cancer risk, cellular stress, increase in harmful free radicals, genetic damages, structural and functional changes of the reproductive system, learning and memory deficits, neurological disorders, and negative impacts on general well-being in humans. Damage goes well beyond the human race, as there is growing evidence of harmful effects to both plant and animal life.”

Most concerns regarding the potential health risks of 5G stem from its networking infrastructure, which is different than 3G/ 4G. The 5G base stations have a different architecture than those supporting 3G and 4G cellular networks. Unlike existing 3G/ 4G cell towers that are massive structures and located away from densely populated areas, 5G base stations can be smaller than a backpack. Hence, they can be mounted just about anywhere, including utility poles, trees, or rooftops in residential neighborhoods.

That also means they will be placed closer to the ground, near houses, apartment buildings, schools, stores, parks, and bus stops. There will also be more 5G base stations compared to the number of 3G or 4G cell towers because of the former’s limited reach. A 5G millimeter network requires cell antennas to be located every 100 to 200 meters, which means thousands of these might be installed in populated areas, raising health concerns. 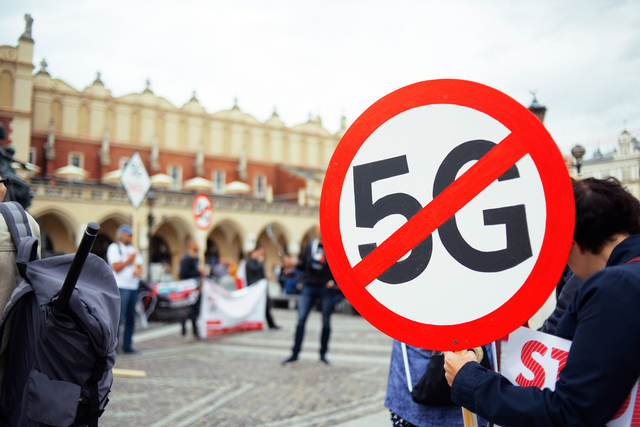 However, having several small 5G base stations instead of a few large 4G cell towers across the city also has its advantages. One of the benefits of small base stations is that they would not have to transmit as much power as current cell towers because the coverage areas would be smaller. A 5G radio replacing a 4G radio at 750 MHz will have the same coverage but will offer faster data speeds and quicker network response times.

Debunked: 5G Does Not Spread Coronavirus

While conspiracy theories about 5G networks being the cause of Coronavirus were rampant last year, they were debunked. But several misleading messages and rumors cropped up in India recently. Many claimed 5G network testing is the reason for the widespread second wave of Coronavirus in the country. These claims are, however, false and not correct.

India’s Department of Telecommunications (DoT) has debunked this conpiracy thoery against 5G radiation. In an official statement, the DoT makes the citizens aware of the lacking scientific evidence behind this claim. “There is no link between 5G technology and spread of COVID-19 and they are urged not to be misguided by the false information and rumours spread in this matter,” it adds.

Neither does 5G network spread #coronavirus. It spreads through respiratory droplets or by touching contaminated surfaces. #IndiaFightsCorona pic.twitter.com/r2AIQsCUKB

The government goes on to clarify that Coronavirus spreads through respiratory droplets and touching contaminated surfaces. 5G technollgy is not the culprit here. The virus has also spread to countries with no 5G mobile networks. Hence, 5G network trials are causing not Coronavirus in India. Any such claims that you read about on social media or your WhatsApp group are baseless and false.

Multiple international organizations have established safe RF exposure limits for radiation from 5G networks. One of them is the International Commission on Non-Ionizing Radiation Protection (ICNIRP), which recently updated its IEEE C95.1 guideline to reduce the limits for local exposure for frequencies above 6GHz. Various countries, including India, Belgium, Russia, and others, have announced even more stringent limits.

“Mobile towers emit non-ionizing radio frequencies having very minuscule power and are incapable of causing any kind of damage to living cells including human beings,” says the Department of Telecom in India. It has prescribed norms for exposure limit for the Radio Frequency Field (i.e. Base Station Emissions). And, they are 10 times more stringent than the safe limits prescribed by ICNIRP and recommended by WHO.

Another agency that publishes exposure guidelines on electromagnetic fields is The Institute of Electrical and Electronics Engineers (IEEE). Their research covers radio frequencies up to 300 GHz, including frequencies under use for 5G networks. 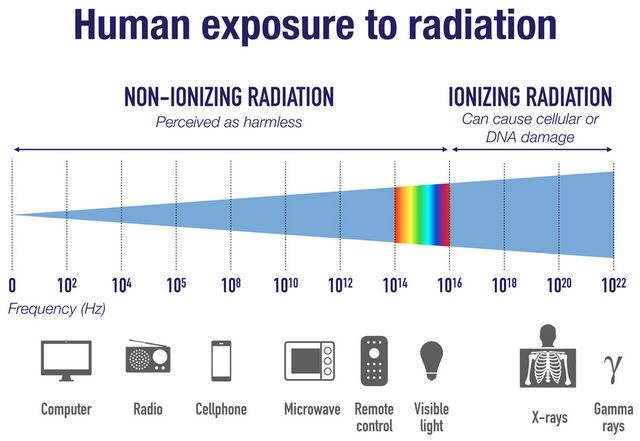 The WHO has also called for further research into the possible long-term health impacts of mobile telecommunication. Its International Electromagnetic Fields (EMF) Project has been investigating the health impact of exposure to electric and magnetic fields since 1996. The agency is currently assessing the health and environmental effects of exposure to static and time-varying electric and magnetic fields in the 0-300 GHz frequency range.

Radio-frequency exposure levels from current technologies result in negligible temperature rise in the human body. However, as the frequency increases, there is less penetration into the body tissues, and absorption of the energy becomes more confined to the surface of the body (skin and eye). With 5G antennas mounted at every 100 to 200 meters, millions of people will then be exposed to millimeter-wave radiation, albeit at very low intensity.

Millimeter waves are mostly absorbed within a few millimeters of human skin and in the surface layers of the cornea. According to research, short-term exposure can have adverse physiological effects on the peripheral nervous system, the immune system, and the cardiovascular system. Long-term exposure may even cause melanoma, ocular melanoma, and sterility in men.

The WHO’s EMF Project, in collaboration with its global partners, has conducted extensive research into the possible adverse effects of exposure to many parts of the frequency spectrum. According to the agency, “All reviews conducted so far have indicated that exposures below the limits recommended in the ICNIRP (1998) EMF guidelines, covering the full frequency range from 0-300 GHz, do not produce any known adverse health effect. However, there are gaps in knowledge still needing to be filled before better health risk assessments can be made”.

Meanwhile, the WHO and the US Federal Communications Commission (FCC) both assert time and again that guidelines regarding exposure are based on hard scientific evidence. Provided that the overall exposure remains below international guidelines, 5G infrastructure and the radiation from them won’t be a public health concern. That said, both the WHO and the International Agency for Research on Cancer (IARC) have classified all radio frequency radiation as possibly carcinogenic.

No peer-reviewed scientific research has definitively associated 5G with increased health risks in humans, animals, and plants. However, the lack of clarity suggests that we need more research before stating whether the 5G technology is entirely safe. One thing’s for certain, though. 5G networks will not help spread pandemics by facilitating electromagnetic communication between bacteria and viruses. That is merely a wild conspiracy theory. Meanwhile, since you are interested in wireless technologies, go ahead and check out our articles on wireless charging, Wi-Fi 6E, and Bluetooth mesh technologies as well.