Apple has tweaked several things in the stock music app including the location of shuffle and repeat buttons. Even though these frequently used buttons are still easy to discover, I couldn’t spot them quickly during my initial interaction with the Apple Music app in the latest iteration of iOS. And I guess, I’m not alone to have found their new location slightly under the wraps. If you also have no idea how to shuffle or repeat songs in Apple Music app in iOS 13, let me show you how to get it done.

To make the interface intuitive, Apple keeps on making changes to the music-streaming app from time to time. And as far as I can remember, this is not the first time the tech giant has changed the location of the shuffle button in the stock music app. So, it’s better to get used to the changes than resist them. Do note that the process of shuffling or repeating music is the same in both iOS 13 and iPadOS 13. That’s why I have shown only the iPhone’s screenshots. With that said, let’s get going!

1. To get started, open the “Music app” on your device.

2. Next, start playing any song or album as usual. When the music starts playing, a “Now Playing” option will appear at the bottom of the screen. Tap on it.

3. Next up, tap on the tiny button (with small horizontal lines) at the bottom right corner. On the next screen, hit the shuffle button located near the Up Next label. It’s also worth noting that the Repeat button is also located right up there. 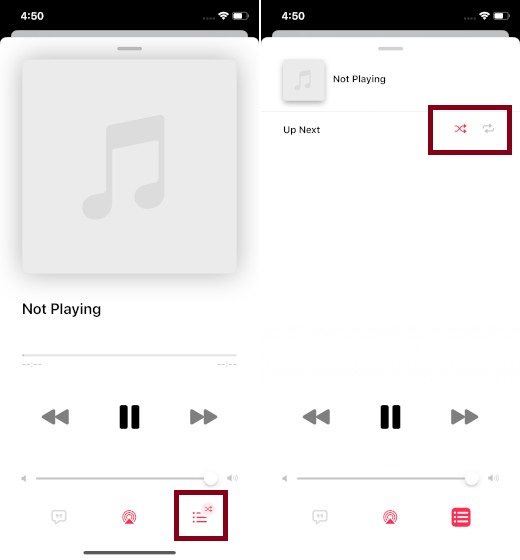 There you go! Now, it’s time to enjoy music to the fullest.

So, that’s how you can shuffle songs, playlists or albums in your Apple Music app. Though it took me a few days to get used to the changes, I have now slowly but steadily settled down with them. In terms of intuitiveness, I still find Spotify way better than Apple’s music app. However, I must say that the tech giant has vastly improved the app by getting rid of almost all the clutter that used to make the interface messed up. Anyway, let me know your favorite features in Apple Music and the music app that you think is by far the best across the platforms.