Apple launched iOS 14 with much fanfare, even without a live keynote. The new iOS 14 comes with a plethora of features like the new App Library, Widgets, and more. This meant that more people installed the iOS 14 developer beta than they normally do. However, no matter how many new features you get, you can’t hide from the fact that developer betas are unstable. And if you are having beta remorse, in this article, we are going to explain how you can downgrade from iOS 14 developer beta to iOS 13.

While you can install a developer beta by just installing the developer profile, removing the beta is not that easy. We will need to first delete the beta profile and then restore your device.

Another thing to keep in mind is that if you have upgraded your Apple Watch to watchOS 7 beta, you won’t be able to use it. And since there’s no way to downgrade your Apple Watch from beta, it will be useless till your iPhone is back to iOS 14. So, keep these points in mind before you proceed. Alright, with all that, let’s get started.

To remove developer beta profile from your iPhone, go to Settings -> General -> Profile. 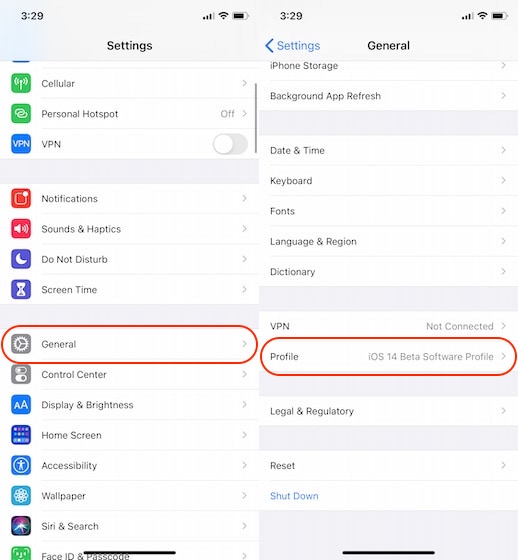 Now, open the beta profile and tap on the “Remove Profile” button to remove the profile. 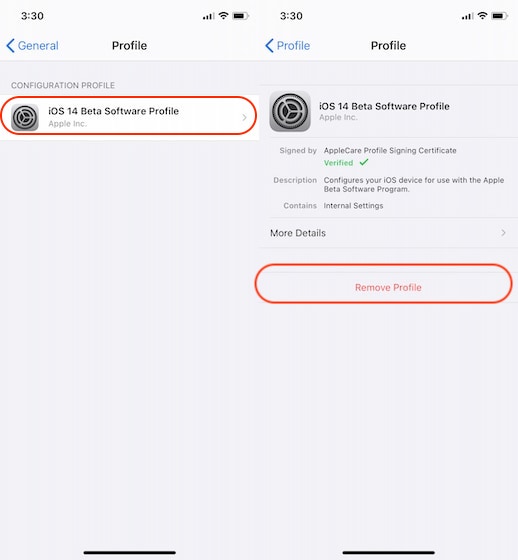 Downgrading from iOS 14 Developer Beta and Restoring to iOS 13

If iTunes is already launched on the Windows machine, quit and relaunch it. For macOS Mojave and Catalina users, you will find your iPhone in the Finder.

Now select your device on iTunes or Finder and you should see the pop-up as shown in the picture below.

Click on the Restore button to restore the device to iOS 13. Your computer will download the latest version of iOS 13 so it will take some time depending on your internet connection.

Once everything is done, you will see the same “Hello screen” on your iPhone that you see when you turn on your iPhone for the first time. When setting it up, you can select the iCloud backup to restore the last iOS 13 backup that you created.

Don’t Get the Developer Beta on Your Primary iPhone

While the latest iOS version calls us like Sirens with all its shining features, I always say that you should at least wait for the public beta before installing it. Let us do the dirty work and tell you all about the new and hidden iOS 14 features, so you don’t have to suffer any pain.