Google recently surprised us when it announced the Android N Developer Preview, considering we all expected the next Android release to be unveiled at the Google I/O conference. Well, it’s certainly a pleasant surprise, as Android N brings some much anticipated features like multi-window, notification enhancements and more. And while the release is aimed at developers, it’s available to download for everyone, thanks to the brand new Android Beta Program.

Sadly, the Android Beta Program is only open to Google devices including the Nexus 6P, 5X, 6, 9, Nexus Player, Pixel C and Android One devices. So, if you are rocking one of the aforementioned devices, here are the ways to install Android N Preview on your device:

There are two ways to install Android N Preview on one of the Nexus devices:

You can download the Android N Preview system image of your Nexus device and flash your device manually. While this method bodes well for developers, we wouldn’t recommend it for people like us, who just want to get a good look at Android N. Flashing a device manually wipes out all of your data and there’s no support for OTA updates unless you enrol the device in the Android Beta Program. So, we’d recommend this process only if you are a developer looking to give Android N a fresh install. So, if you want to go ahead, here are the steps listed by Google to manually flash Android N Developer Preview.

We’d recommend the Android Beta Program because the process is simple and you don’t lose your data. Also, whenever a new preview build rolls out, your device will receive it as an OTA update. You will also get the public Android N builds when Google releases them. If at some time, you feel like the bugs of a preview build are too much for you, you can easily roll back to the most recent public Android build.

So, let’s get started, here are the steps to install Android N Preview on your device: 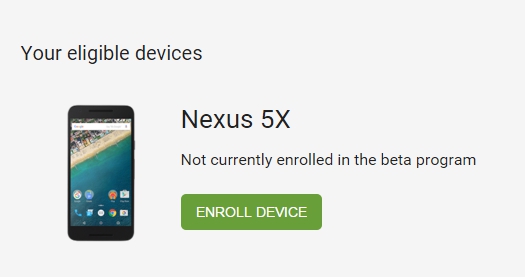 2. Accept the terms & conditions to the beta program and click “Join Beta“. You will then get a message on the screen saying “Device enrolled”. 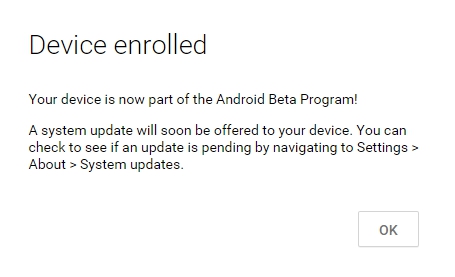 3. Then, your Nexus device should get a notification of a system preview update available to download. Open up the notification and you will see the details around the update. Tap the “Download” button to start downloading. 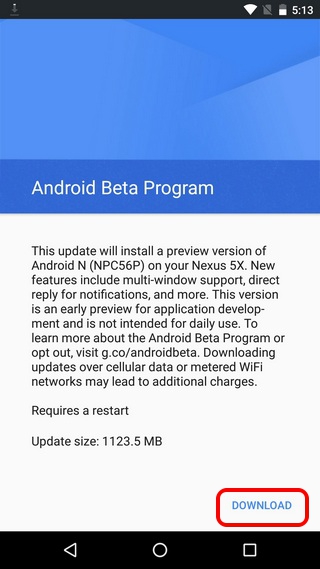 Note: The size of the Android N Preview update for the Nexus 5X (the device we tested it on) is 1123.5 MB, so we can expect the update to be approximately the same size on other devices too. Also, if you don’t receive a preview update notification soon, you can go ahead and check in Settings->About->System updates.

4. Once the update is downloaded, you can install it right then or schedule it for later. To install it, open the “System update downloaded” notification and hit “Restart & Install“. Your device will then be rebooted and the new Android version will be installed. 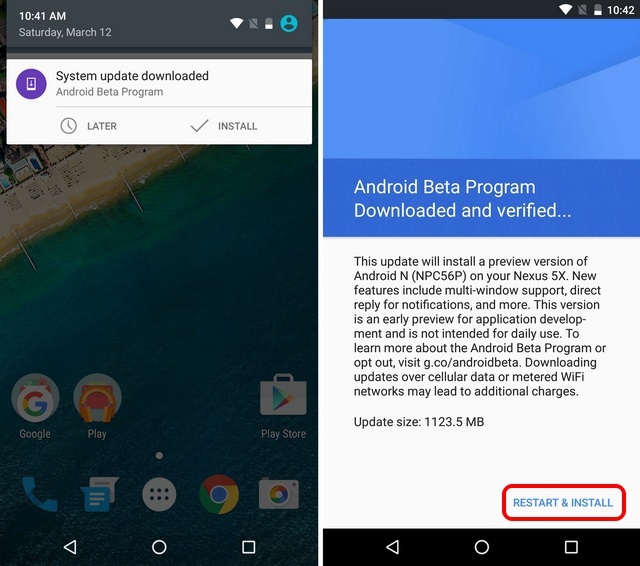 5. After the update is installed and your device boots up again, you will get a message from Android Beta Program, telling you more about it along with a Feedback button. Tap “Ok” and then, go to Settings->About and you should see the Android Version listed as N. You can also keep tapping the Android version to start up the Android N easter egg, which is just an N, as of now and still opens up the same old Flappy Bird like game. 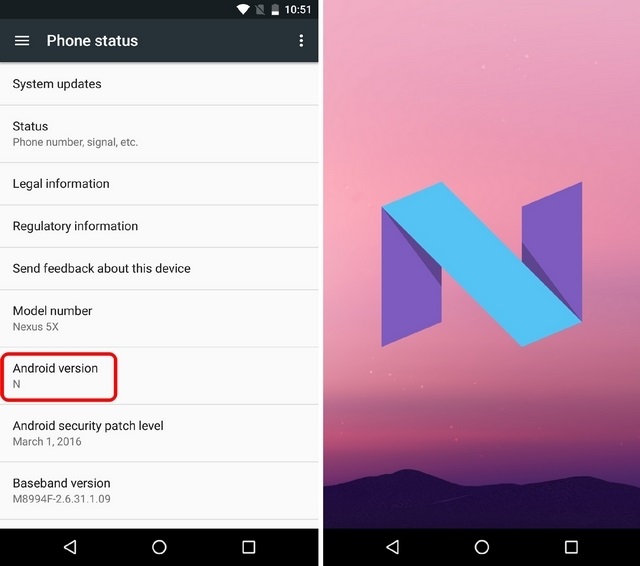 Note: You can easily unenroll your device from the Android Beta Program by going to its page and clicking “Unenroll Device”. You will then receive an update that rolls your device back to the most recent stable public version of Android. However, you will lose all your data, so don’t forget to back everything up.

Installed Android N on your Google device yet?

It’s important to note that the Android N Preview release is aimed at developers and it’s not yet polished enough for daily use. If you still want to go ahead and download the preview, you should make up your mind of living with bugs and performance issues. Now that we have cleared that out, install Android N following the steps above and if you have done it, do let us know your Android N experience in the comments section below.