iOS doesn’t really offer users a lot of customizability. There’s no such thing as launchers for iOS, and users don’t have any options when it comes to customizing so much as the app icons on their home screen. However, there are a lot of workarounds that people have figured out, that allow at least some amount of customizability on iPhones. Non-jailbroken iPhone users need to resort to rather crude workarounds, but jailbroken users have access to a plethora of tweaks to customize their iPhone or iPad. No matter which side of the fence you’re on (jailbroken, or not), I’m going to tell you some ways you can customize your iPhone or iPad:

One of the few customization workarounds that people have figured out for non-jailbroken iPhones is a neat trick involving Safari’s “Add to Home Screen” feature. The workaround can be used from the iEmpty website. With this workaround, you can create custom home screen layouts (albeit, with a lot of work), or just get custom app icons, and half-baked themes for your iPhone. There are a lot of strings attached with this method, but that’s all you get on non-jailbroken iPhones. You can even create blank icons for your home screen, and use them to position other apps in imaginative ways.

Do keep in mind that this method takes a lot of time, and I’d only recommend it if you’re just too desperate to customize your iPhone, and you don’t want to jailbreak it. Also, if the iEmpty website doesn’t work well for you, don’t worry, there are other websites as well.

Jailbreaking an iPhone presents us with an infinite amount of customizability, along with a lot of power. There are just way too many tweaks available, and I can’t possibly mention all of them in this article, so here are some of my personal favourites from the Cydia store:

1. Get Bundled Notifications in iOS

I really like iPhones, but I absolutely hate the way iOS handles notifications. Sure, there is a chronological order to them, but it just gets cluttered very easily. If Apple wanted this to be the default notification style, but they really should’ve given the user an option to make a choice. Anyway, you can easily get Android-like bundled notifications with this tweak called “Unify“. The tweak is free, and can easily bundle all your notifications by app, or by time (the way Apple should’ve implemented them in the first place). Unify also allows chaining notifications together, so multiple notifications from the same person don’t end up cluttering your home screen. 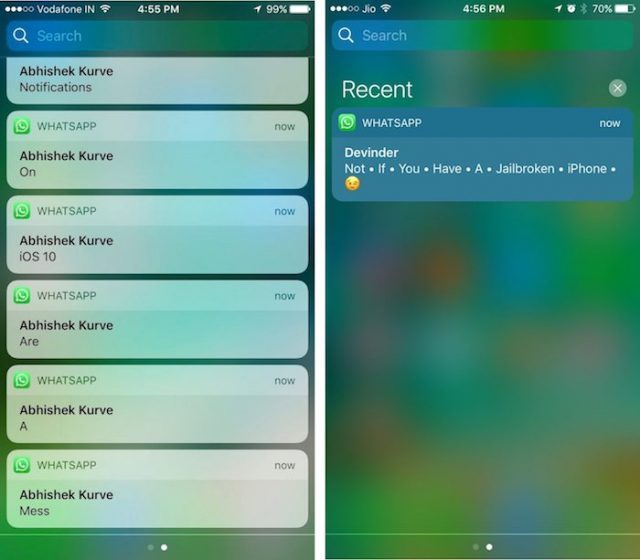 You can simply install Unify, head over to Settings -> Unify, and enable the tweak. There are a couple of other settings that you can change for the tweak, so feel free to play around to get your notifications looking exactly the way you want them to.

One thing that everyone has been asking for in iOS for a long time, is a Dark Mode. Essentially, just a dark themed version of iOS, because it just looks that much better! While dark mode would look much better if iPhones had AMOLED displays, if you’re looking to get a dark version of iOS on your iPhone, look no further than Eclipse. Eclipse is a jailbreak tweak that brings a system-wide dark mode to iOS. With Eclipse, you can easily apply dark mode effects to various elements of the UI. Alternatively, you can seven use different colours, to make your iPhone look just that much different. 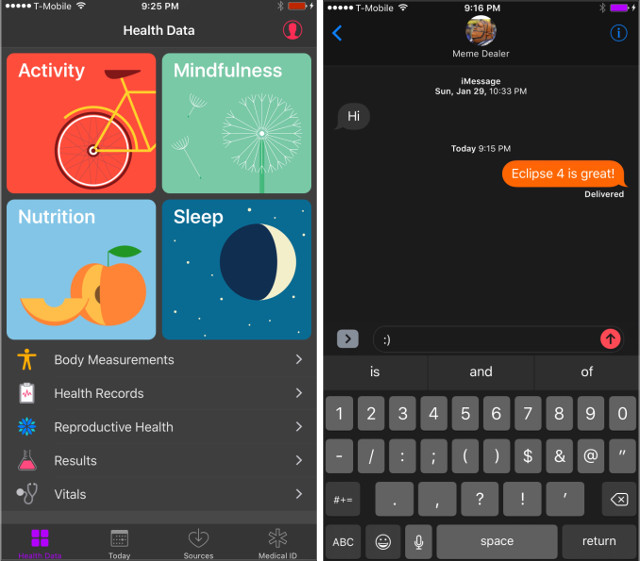 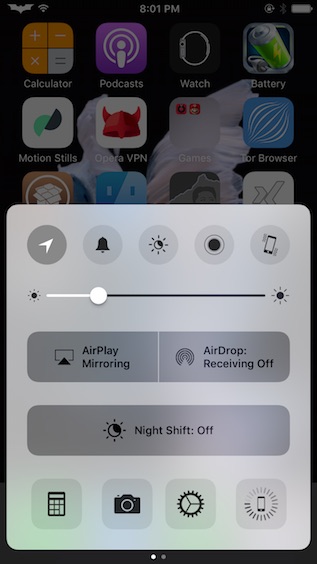 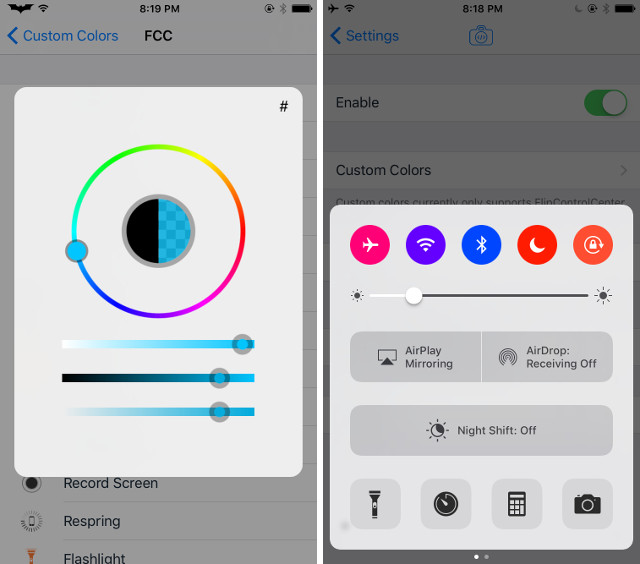 If you’re using an iPhone 6s, or newer, you must have used 3D Touch. The pressure sensitive response that the newer iPhones support. When you 3D Touch on an app icon, you must have noticed that the background gets blurred, giving a very nice aesthetic appeal to the UI. However, if you’re bored of the blur, and would like to see it coloured according to the app’s dominant colour, the jailbreak tweak “Cuttlefish” is exactly the tweak you should be looking at. 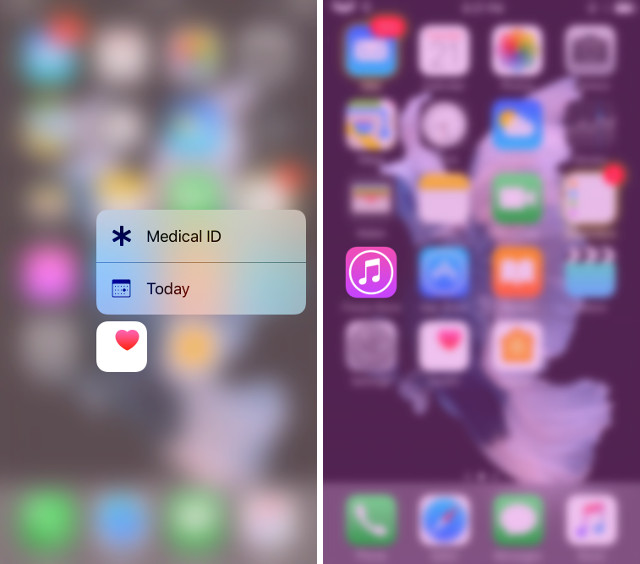 With Cuttlefish installed, all your 3D Touch menus will have a background blur coloured according to the app’s dominant colour. The effect is quite nice, although iTunes is a little over the top, to be honest.

You can use the CCTButtonActions jailbreak tweak to add 3D Touch menus to the toggles in the top row of Control Center. So, you can 3D Touch on the WiFi toggle, and go straight to the WiFi settings, etc. However, do note that the tweak clashes with FlipControlCenter, and will uninstall it if it is already installed on your iPhone. 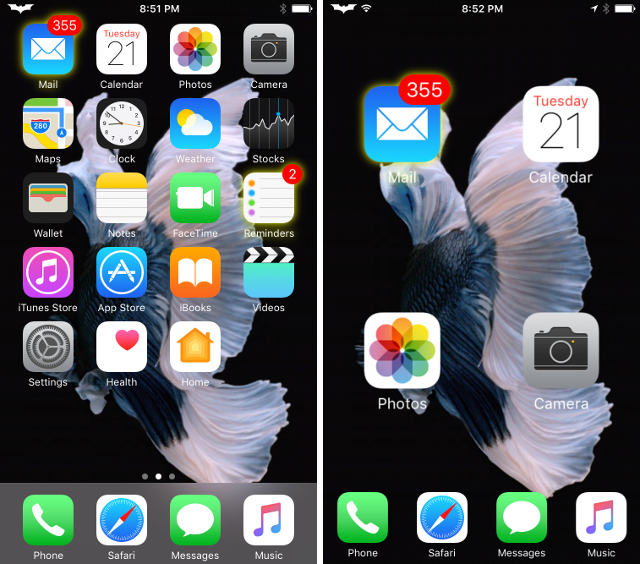 The tweak also includes customization options for folders, so you can basically completely customize the look of your jailbroken iPhone with ReformX. If you’d also like to have the app icons on your home screen animate when you swipe between home screen pages, like they do on Android devices, you can do so with the tweak “Cylinder“.

7. Glowing Icons for Apps with Notifications

This one is purely for the heck of it, to be honest. If the app badges that show up on apps with notifications are not your style, you can simply download the GlowBadge tweak. There’s no setup involved, the tweak starts working on its own, and any app with notifications will be shown with a glow around its edges. If you want to get rid of the app badge that shows up, just go to Settings -> Notifications, tap on the name of the app, and uncheck “Badge App Icon”, and you’re done. 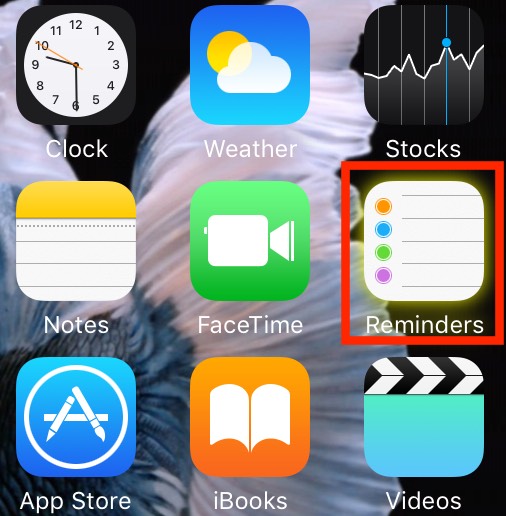 The glow is very subtle, and you may miss it if you’re not looking carefully, but with a little bit of time, you get used to it, and the subtle glow is actually very nice to look at.

Let’s be honest, the battery display in iOS is rather boring and bland, and while there is no option to change the look of the battery display in iOS, jailbroken users can easily change the look of the battery display. With the tweak called “Lithium Ion”, you can choose from a plethora of battery icons. Lithium Ion comes with three different types of themes: one for the standard battery usage, another for when the battery level falls below a particular level, and a third one for when the battery is charging. You can choose to enable each of these themes, or just stick with one, or two of them. It’s all up to you. Regardless of what theme you use, Lithium Ion can definitely let you add a lot of personality to your iPhone. 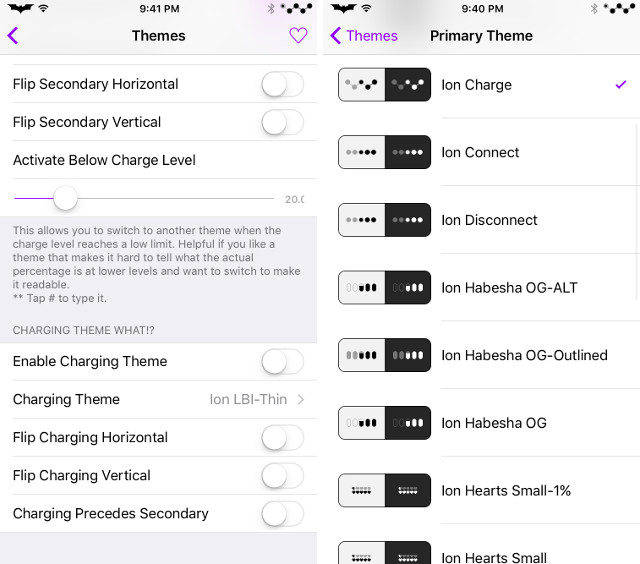 I think we’ll all agree that the carrier logo is one of the most boring, and useless things on the Status Bar. Fortunately, with a jailbreak tweak called “Zeppelin“, you can quickly and easily change the carrier logo on your iPhone to one of many selectable icons. Zeppelin comes with logos such as Batman, The Dark Knight, Assassin’s Creed, and a lot more. Plus, you can get extra logos from the Cydia store, to customize your iPhone’s carrier logo just the way you want to. 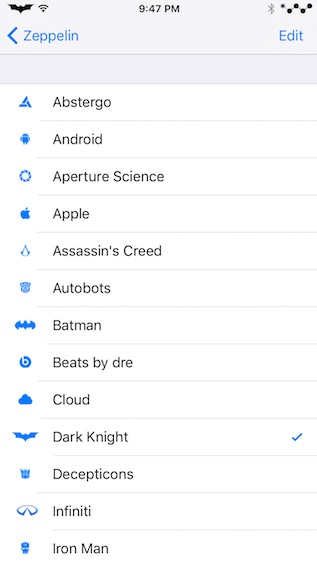 Apple does this thing, where it asks users for suggestions on how to improve iOS, and then completely ignores all of it. One of the things that every single iPhone user does not like, is the volume overlay that shows up when you change the volume, and takes too long on the screen. Fortunately, jailbroken users can install this handy tweak called “StatusVol X“. As the name suggests, the tweak blocks the default iOS volume overlay, and places it on the status bar instead. 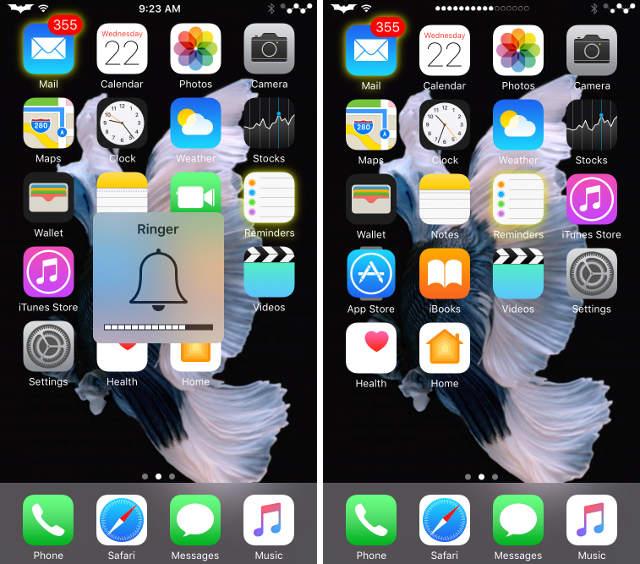 The changes in volume show up as small circles on the status bar of the iPhone. This is definitely a much less obtrusive way of displaying changes in volume, and even though it doesn’t look all that good, it is so much better than the default, that I basically love it.

11. Get Alternative Options in Power Menu

The power menu in iOS is a little lacking, to be honest. There’s only one option in the power menu, and that is “slide to power off”. So, if you want access to more options, such as “Respring”, “Restart”, and more, just  install the jailbreak tweak called “PowerDown“. This tweak will immediately present you with alternative options in the power menu. So, you can simply swipe to respring your device, reboot it, and much more. PowerDown comes handy especially if you try out a lot of jailbreak tweaks, because most of them require respringing the iPhone for the changes to take effect. 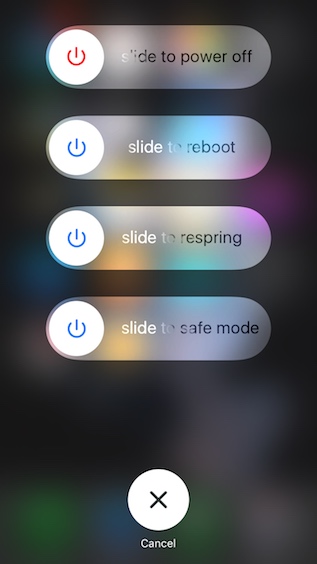 If you’ve ever used an Android device, you’d probably have used Nova launcher. The launcher brings some really cool features for customizing your Android device, and one such feature was the ability to place app icons behind other app icons, making your home screen look a lot more attractive, and functional as well. 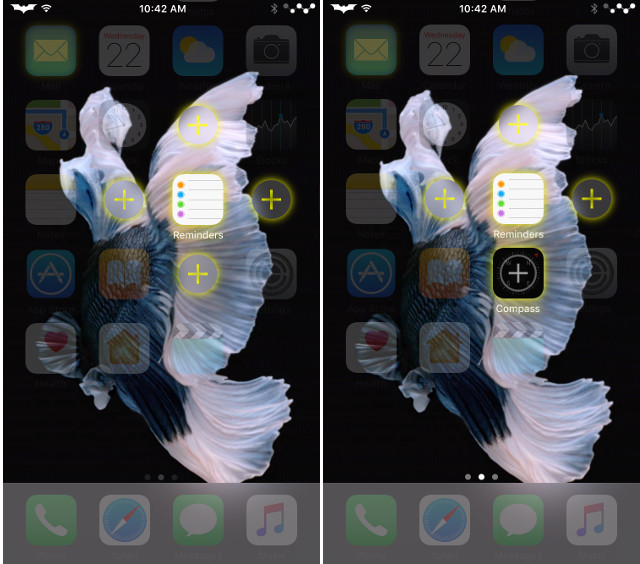 If you want a similar feature on an iPhone, just install the Apex2 tweak.This tweak lets users place app icons behind other app icons. You can then swipe down on the app icon to reveal the apps hidden beneath it. With Apex2, you can easily organise your iPhone home screen in a unique way, and stop using those annoying folders that look pretty bad.

Customize Your iPhone with These Tweaks