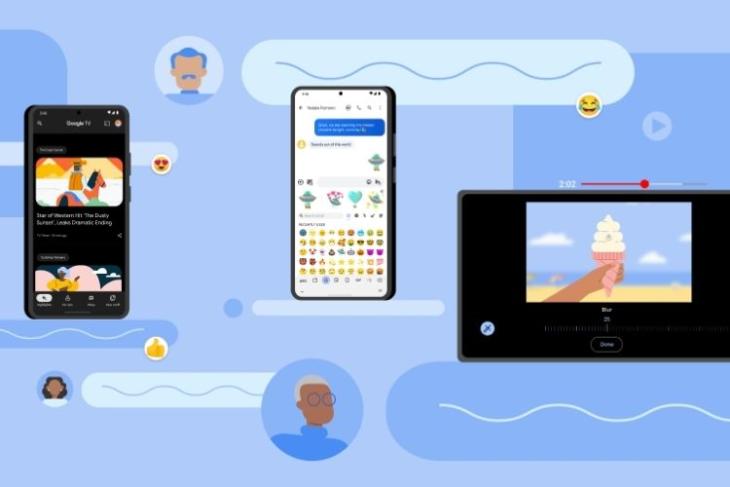 As part of its latest feature drop, Google has focused on a number of its apps and services and rolled out a few new features. The list of apps getting new updates includes Google Messages, Photos, Gboard, and more. So, we have a lot to look at, ranging from iMessage Reactions on Messages to new editing features on Photos. Here are the details.

As known to most of us, Google Messages now support iMessage Reactions. That means when your iOS friend reacts to any of your messages, you will see that reaction as an emoji, as opposed to it showing up in plain text earlier. This functionality recently started rolling out in Messages beta and is now reaching the general audience.

You will also be able to share high-quality videos to iOS users as Google Photos links and this will start for high-quality photos too. More features like Message Categories (Personal and Business), deletion of OTP messages after 24 hours, nudges to follow up on messages, and birthday reminders, are also coming in.

The Portrait Blur feature, which was exclusive to Google One and Pixel users previously, is now available for more subjects such as pets, food, plants, and more. This feature allows you to blur the background of a photo after it was clicked, even if it happened years ago.

Google Assistant will now make it easier for you to pay for parking, check your parking status, or extend your parking using just your voice. You just have to say “Hey Google, pay for parking,” follow the on-screen instructions, and make the payment via Google Pay without much hassle.

The Gboard keyboard app now has a new grammar correction tool, which spots grammatical errors and gives suggestions, much like how Grammarly works.

And in line with recent rumors, Gboard has also got hold of the Emoji Kitchen feature, which lets you convert more than 2,000 emoji combinations into stickers. Pixel users get the ability to convert text into stickers in messaging apps and it shall reach all Android users soon.

Google TV has also got an update in the form of a new “Highlights” section. This allows you to have access to a customized feed of news and entertainment content such as movie reviews and more. You will also get the option to check out the movie or show a particular article talks about if you intend to watch it. You will also be able to rate it or add it to the Watchlist.

There are a few more updates for some more Google services. Google’s Live Transcribe feature now has an offline mode to easily convert speech-to-text for the ones with hearing disabilities. There’s also the new Screen Time widget, clicking on which will lead you to Digital Wellbeing.

Plus, Nearby Share now allows you to share media and data with multiple people at the same time instead of a single person. This is rolling out to Android 6+ users.

There’s Something for iOS Too!

In addition, Google has added new features to its apps on iOS and iPadOS. The Google Translate app now has an iOS widget and there’s a new XL widget for Google Drive on iPad. Gmail and chat apps will also show the sender’s profile photo when a message or email is received soon. This will be similar to how WhatsApp shows the DPs of users when a message is received.

These are loads of new features Google has introduced for us. Which is your favorite? Let us know in the comments below!