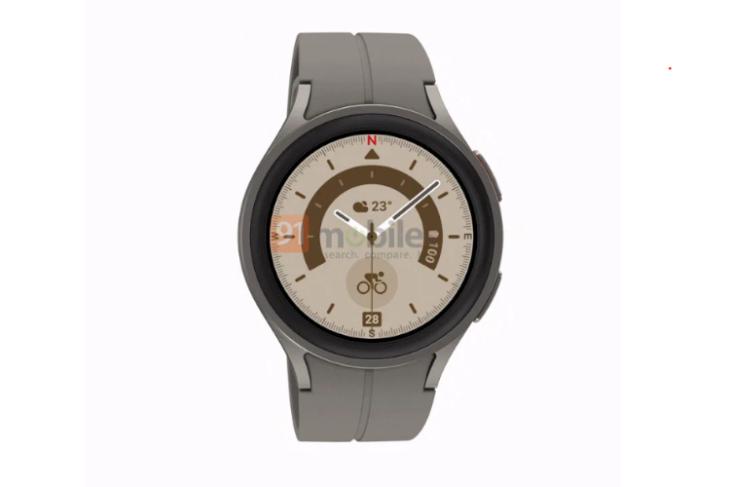 The 3D “turntable” renders shared by Blass in a report on 91mobiles gives us a 360-degree view of the Galaxy Watch 5 and Watch 5 Pro. Both models will utilize Sapphire Crystal instead of Gorilla Glass DX+ for protection.

Starting off with the regular Galaxy Watch 5, it bears the codename “Heart” and resembles the current Galaxy Watch 4 in terms of design. According to the report, Samsung will launch the standard Galaxy Watch 5 in a wide range of colors, including Graphite, Silver, Blue, and Pink Gold.

As for the specifications, you could expect the Watch 5 in LTE or Bluetooth variants with two size variants, presumably 40mm and 44mm. In terms of software, both watches will run wearOS 3.5 with One UI Watch 4.5. Going by previous reports, we also know that the Galaxy Watch 5 series could equip a thermometer sensor to measure body temperature, similar to the upcoming Apple Watch Series 8’s thermometer sensor.

Coming to the Galaxy Watch 5 Pro, it offers an industrial look in Black or Gray Titanium color variants. This model is codenamed Project X and is likely to arrive in 45mm size. You could also expect LTE variants on the Pro model. The key change in the Watch 5 Pro is the removal of the rotating bezel in favor of a digital one. We will have to wait to see if the new bezel improves UI navigation.

Samsung Galaxy Watch 5 is likely to start around 300 Euros (~Rs. 24,000) and go all the way up to 540 Euros (~Rs.43,000). It is set to launch next month at Samsung’s Galaxy Unpacked event alongside the new Galaxy Flip and Fold foldables and new TWS earbuds.